Odd Squad celebrates 20 years since debuting Through a Blue Lens

Initial aim of project was to show realities of drugs and addiction
Nov 13, 2017 2:15 PM By: Jessica Kerr 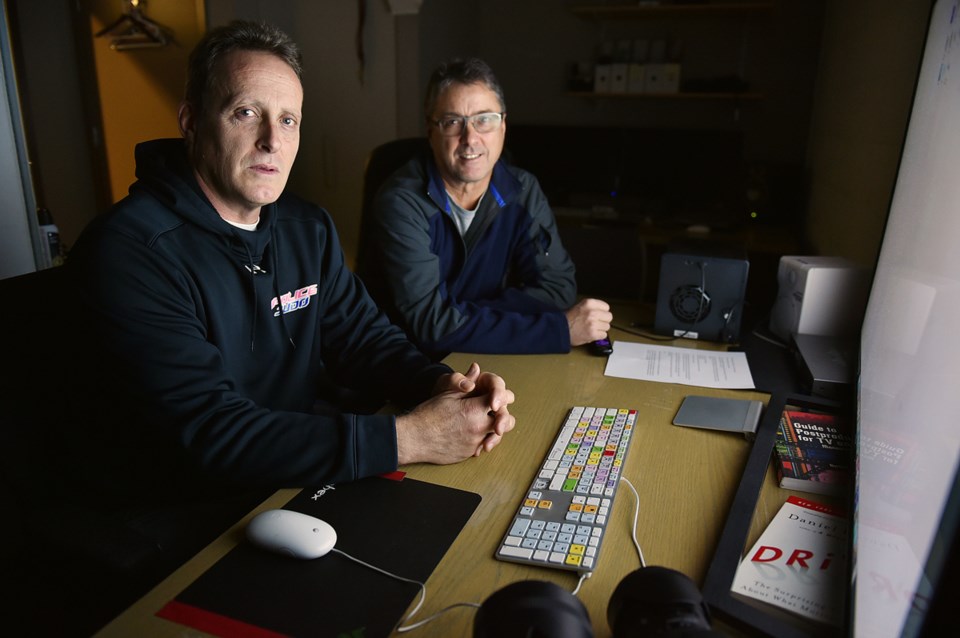 It’s been two decades since members of the Odd Squad first picked up a video camera and started documenting the stark realities of addicts living on Vancouver’s Downtown Eastside.

In 1997, a group of beat cops working in the Downtown Eastside came up with the idea to make an educational video about drug addiction. It started with officers doing presentations to college and high school students that included a slideshow of photos taken by one of their fellow officers.

“From there, we started talking about doing a video and all from the perspective of the addict and the people we were dealing with, not really concerned about the role of policing in it but just more of a drug education thing for younger people,” said Sgt. Toby Hinton.

Hinton and a few of his fellow officers ponied up $400 each, purchased a video camera and started shooting.

“We probably destroyed more tape, at the time we were using tape, than we laid down good film on because we didn’t know what we were doing,” Hinton said.

However, they managed to put together enough footage to get the attention of a director from the National Film Board of Canada, and the project took off. The result, Through a Blue Lens, has been viewed millions of times over the years, but the group didn’t stop there.

The Odd Squad has produced other documentaries and taken their message on the road, doing presentations at schools, in Indigenous communities and for other police and law enforcement personnel across Canada and around the world.

“We’ve done presentations to over 200,000 kids in our country. We’ve been to the Arctic half a dozen times, every single community in the Northwest Territories,” Hinton said, adding that Odd Squad members have travelled to the Arctic, China, Africa, the Middle East and throughout the U.S. to present at conferences to police officers, cadets and other law enforcement professionals.

The initial aim of the project was to shine a light on the realities of life for drugs addicts in the hopes of deterring young people from going down that path. Hinton says they didn’t want to include the role of the police in the film.

“We weren’t sold on the idea of the police being involved in the film at first, but the director was set on the story of the police and the interaction with the addicts down there and that allowed us to leverage for a second film, which was what we really wanted to do in the first place,” he said.

The follow-up, Flipping the World, focused on young people and their thoughts, perceptions and feelings about drug abuse.

“We were kind of facilitators in that, we weren’t really taking centre stage and the requests started building for classroom presentations and drug education presentations,” Hinton said.

Over the years, the group has expanded its reach. In addition to producing presentations and documentaries aimed at young people, as well as police officers, the Odd Squad took on a peer-to-peer program. It trains young people, who are already leaders in their community, to go back into their schools and communities and talk about the dangers of drugs.

The group has worked extensively with teams in the Western Hockey League — over the last two decades about 1,000 junior AA hockey players from Western Canada have come to Vancouver to take part in the program and then take that message back to young people in the communities where they’re playing.

“We look for leaders on the team that are going to go into schools and talk to kids about drugs,” said Chris Graham, one of the founding members.

“In those small towns, sometimes that’s the only game, so they get a lot of traction in places like Kamloops and Kelowna and North Battleford and Lloydminster.”

The group is currently working on a few new projects, including a three-part series of short films tackling fentanyl and the opioid crisis in the city, an educational video aimed at helping police deal with people on the autism spectrum and another video aimed at deterring girls from getting involved with gangs.

“It started with an idea, it was driven by passion and drive of a few core group of beat cops who saw a need for prevention, and it’s been sustained by a lot of volunteer work and effort from people that have come in along the way. That’s both on the police and the civilian side as well too,” Hinton said.

The squad is celebrating its 20th anniversary Dec. 1 with Back on Track, a conference and gala focused on drug prevention.

The society has several speakers lined up covering drugs and gangs, as well as the new challenges faced by police officers such as autism and young girls and women joining gangs. Hockey Night in Canada host Scott Oake and his wife Ann will give the night's keynote speech. The couple lost their 25-year-old son Bruce to a heroin overdose in 2011 and have since committed to turning their loss into positive opportunitied for others struggling with addiction. The Odd Squad will also debut the first in its three-part series on fentanyl.

The conference at the Pinnacle Hotel Harbourfront will be followed by a gala fundraiser and dinner with a performance by Jim Byrnes, Paul Pigat and All the Kings Men.

For more information or to buy tickets go HERE.