Half of strata units sell out before groundbreaking on unique Victoria Drive complex
Mar 13, 2017 8:00 AM By: Frank O'brien 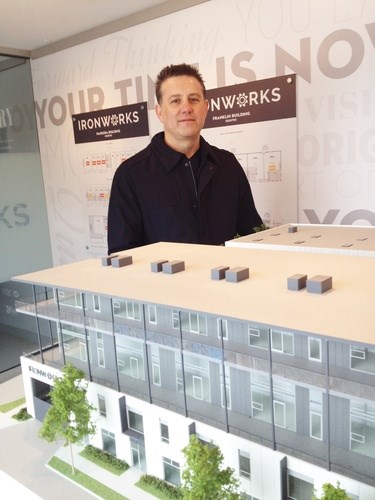 Ben Taddei, COO of Conwest Group of Companies with Ironworks model: too conservative in estimating demand for strata commercial space in East Vancouver.Business in Vancouver photo

Developer Conwest Group of Companies left money on the table, but company chief operating officer Ben Taddei has few regrets about the risk taken with the $14.5 million purchase of an old industrial site in East Vancouver three years ago.

This week, as city and company officials symbolically broke ground on the mixed-use Ironworks project, half of the floor space had already sold at $330 to $600 per square foot, and Conwest was beating investors off with a stick.

The site, at 200 Victoria Drive just north of East Hastings Street, falls under a 2009 spot zoning initiative of the City of Vancouver that allows higher density for job-generating projects in East Vancouver.

The 2.3-acre property was awarded a 3 FSR (floor space ratio) that would have allowed Conwest to develop 300,000 square feet in the first stacked industrial and office project in the city.

Conwest, itself a Vancouver-based firm, quickly discovered there was pent-up demand for such strata commercial space from a wide range of local industrial and office tenants.

“If we knew then what we know now we definitely would have gone 3 [FSR],” Taddei said with a laugh. He added that Ironworks attracted a great deal of interest from investors hoping to buy space and then lease it back to tenants, but Conwest restricted sales to owner-occupiers of local companies. The formula has proven so successful that Conwest is now developing two similar strata projects, including one on Southwest Marine Drive in Vancouver.

When it completes in 2019, the block-spanning Ironworks will comprise two buildings designed with ground-floor light industrial and warehouse space – complete with 26-foot-high ceilings and loading docks – and showrooms, with office space above.

The buildings are divided into units that range from 3,000 square feet to 14,000 square feet and can cover multiple floors. The city’s light industrial zoning allows everything from grinding coffee to baking bread to creating video games.

An estimated 35 high-tech or service-oriented and professional businesses are projected to provide 500 permanent jobs at Ironworks when it opens.