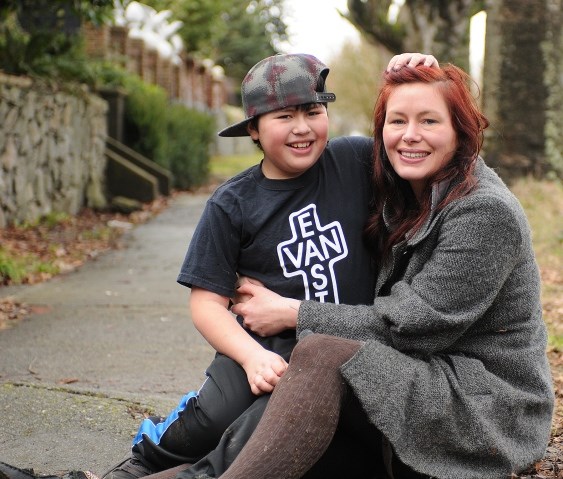 Park board commissioner Sarah Blyth is seeking the federal NDP nomination for the riding of Vancouver Quadra, which has been held by Liberal MP Joyce Murray since 2008. Photo Dan Toulgoet

Outgoing Vision Vancouver park board commissioner Sarah Blyth is seeking the NDP nomination for Vancouver Quadra in the 2015 federal election.

“My papers were just accepted,” Blyth told the Courier Monday morning. “I had a lot of people approach me, but I had to speak to Sebastian first.”

It was Blyth’s 10-year-old son Sebastian who in March talked her out of seeking a council seat or even re-election for park board. At the time Blyth took the message to heart and announced she’d be leaving politics in November after the municipal election to spend more time wither her son.

Besides her park board and community responsibilities, Blyth works shifts as a senior outreach worker at a low-income apartment building in the Downtown Eastside, volunteers with the Vancouver Street Soccer League and is involved with several community initiatives, including one that collects and distributes new and used cellphones.

“I spoke with Sebastian about everything it would involve and he said I should run because a lot of people like me,” said Blyth, laughing. “He said, ‘You’ll only lose if you don’t try.’”

Blyth was also contacted by Thomas Mulcair, leader of the NDP Party of Canada, and Libby Davies, the NDP MP for Vancouver East.

“I had to explain to Sebastian who they were,” said Blyth.

Vancouver Quadra, a Liberal stronghold since the 1980s, has been held by MP Joyce Murray since 2008. Murray is seeking re-election in 2015. Vancouver Quadra is the sixth wealthiest riding in Canada with an average annual income of more than $145,000 per family.

The riding includes Arbutus Street to the east, the University of B.C. to the west, Southlands and the Musqueam Indian Reserve to the south and Coal Harbour to the north. Vancouver Quadra lost territory east of the Arbutus Corridor in 2013 after Elections Canada created the new riding of Vancouver Granville.

Blyth said she’s prepared to fight for what she sees as some of the key issues in the riding, including cuts to science funding at UBC and affordable childcare. Blyth also wants to play the role of watchdog as the Jericho Lands are developed.

“I grew up in this riding and truly care about it,” said Blyth, who would consider moving back to the riding if elected. “My mom still lives in Vancouver Quadra and Sebastian and I have lots of friends and family there.”

In the 2011 election, Murray won the riding with 22,918 votes beating Conservative Deborah Meredith who placed a close second with 20,868 votes. The NDP candidate, Victor Elkins, placed third with 7,551 votes beating out the Green’s Laura-Leah Shaw who garnered 2,899 votes.