Injured Brandon Sutter and Jay Beagle were meant to take pressure off the Canucks’ youth.
Daniel Wagner Nov 15, 2018 11:23 AM

When the Canucks signed three bottom-six forwards at the opening of free agency this summer, one of the justifications they used was that the three forwards would allow them to put the Canucks’ young forwards in a position to succeed. Jay Beagle, Tim Schaller, and Antoine Roussel would join the Canucks’ other veterans in taking on the bulk of the defensive duties, freeing up the youth to provide offence.

“We want to give our young players a chance to play in skilled positions on the team and in offensive situations,” said Jim Benning back in July. “We want to be a harder team to play against and I think the players we added make us harder.”

The signings gave the Canucks lineup an old-school configuration: a defensive bottom-six forward group and an offensive top-six. It’s a structure that has been somewhat abandoned by the top teams in the league, who favour more skill throughout their lineup, but perhaps one necessary for a Canucks team still in the midst of a rebuild.

Having Brandon Sutter and Jay Beagle on the third and fourth line helped shelter the likes of Elias Pettersson and Nikolay Goldobin early in the season, but Bo Horvat was also a somewhat unexpected beneficiary.

The addition of a faceoff ace in Beagle took that responsibility out of Horvat’s hands. In the first five games of the season, before Beagle got injured, Horvat took less than 20% of the defensive zone faceoffs. Even when Beagle left the lineup, however, Horvat was still somewhat sheltered: Sutter took 80 defensive zone faceoffs over the next seven games, while Horvat took 49.

This allowed Horvat to start more of his shifts in the offensive zone, appropriate for a player expected to help carry the offence for the post-Sedin Canucks. Considering he had nine goals and 16 points in his first 19 games, on-pace for 39 goals and 69 points over an 82-game season, you would think it was working.

With Sutter also injured, however, Horvat is back to taking the vast majority of the defensive zone faceoffs for the Canucks.

(Ed note: This was written before Tuesday's game against the Islanders, where Horvat continued the trend, taking 13 of the Canucks' 19 defensive zone faceoffs)

Horvat is frequently double-shifted to take defensive zone faceoffs, then jump off the ice immediately. It’s not hard to understand why: Horvat leads the Canucks in faceoff percentage by a wide margin. He’s won 54.3% of his faceoffs this season; next best is Sutter at 47.1%, then Elias Pettersson at 46.1%. With all the extra faceoffs, Horvat now leads the NHL in faceoffs taken, with 500. 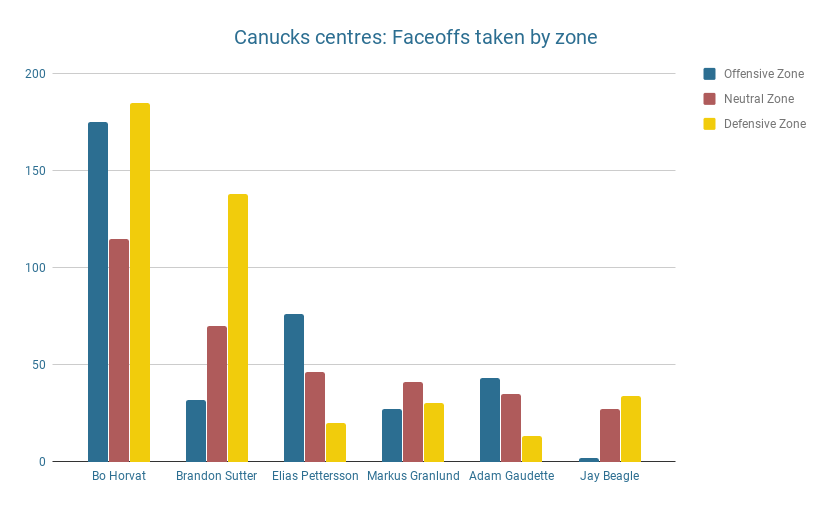 Here’s the thing: instead of getting buried in his defensive zone duties, Horvat is actually thriving. He’s scored at a point-per-game pace with Sutter and Beagle out of the lineup and has posted better underlying numbers.

During the first five games of the season, when Horvat was most heavily sheltered, he posted a 37.7% share of shot attempts, meaning the Canucks were badly out-shot when he was on the ice at 5-on-5. The Canucks were also out-scored 6-2. With Sutter and Beagle out, Horvat has a 48.2% shot attempt share, and the Canucks have out-scored their opponents 8-3 with Horvat on the ice at 5-on-5.

Perhaps Horvat doesn’t need to be sheltered at all and thrives under the pressure of playing a more defensive role.

A tap of the stick to the Hockey Hall of Fame for finally inducting Willie O’Ree, the player who broke the colour barrier in the NHL and a tireless promoter of the game. It was long overdue.

But I’m dropping the gloves with the HHOF for inducting Gary Bettman while he’s still active commissioner of the NHL. Bettman will have a complicated legacy — he oversaw unprecedented growth in American markets, but also three lockouts, a lost season, and ongoing litigation in regards to concussions — and it’s bizarre to induct him while that legacy is still playing out.

7 - In a twist that few saw coming, Erik Gudbranson is one of the highest scoring defencemen in the NHL at 5-on-5. Gudbranson’s seven points are tied for ninth.

12 - The much-maligned Loui Eriksson went on a tear over the last couple weeks, scoring seven points during a recent four-game scoring streak. His 12 points are good for third on the Canucks.