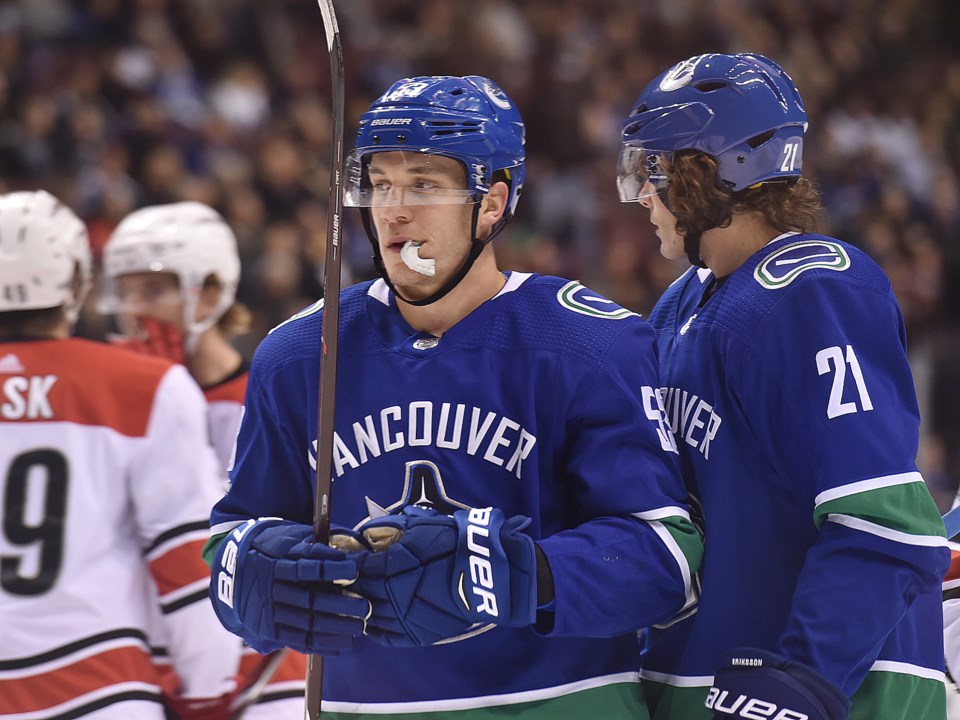 The preseason could not have gone much worse for the Canucks. They won just one out of seven games, and that came in a shootout. They were out-scored 30 to 11. At even-strength, they scored the fewest preseason goals in the NHL, managing just five.

Most of the Canucks’ prized prospects demonstrated they weren’t ready for the NHL, while newly-signed veterans Jay Beagle and Tim Schaller were largely invisible. Fellow free agent signee Antoine Roussel didn’t even play in the preseason after setbacks in his recovery from a concussion.

All of that amounted to one of the most disappointing Canucks preseasons in recent memory.

Fortunately, all of that was wiped clean with the start of the regular season on Wednesday, as Elias Pettersson tore the roof off Rogers Arena with a first period goal and the Canucks turned a big third period into a 5-2 win. Unfortunately, the rest of the Canucks’ regular season is unlikely to be as good as the season opener.

That’s not to say that the season will be all doom and gloom. So, in an attempt to stay positive, here are some bold predictions for the coming season with an optimistic bent.

(Editor's note: These predictions were all made prior to Wednesday's game, as that is the reality of print deadlines on a weekly paper.)

The Canucks haven’t had a 40-goal scorer since the 2010-11 season, when both Daniel Sedin and Ryan Kesler managed the feat. In his rookie year, Brock Boeser was on pace for 38 goals over a full 82 games, before a freak injury ended his season.

Though he didn’t score in the preseason, Boeser will hit the ground running in 2018-19 and, with a power play focused on creating scoring chances for him, will reach 40 goals.

2 | Troy Stecher will bounce back

In his rookie year, Troy Stecher surprised everyone by leading Canucks’ defencemen in scoring with 24 points. With a new coach last season, Stecher found himself starting from the bottom once again, working his way up from the third pairing. He managed just 11 points in 68 games.

Now, however, Stecher is sure to play big minutes right from day one. He came into training camp with new determination and confidence and looks poised to breakout. 35 points seems within his reach, particularly if he gets a chance to play the point on the first power play unit.

There’s a reason Elias Pettersson is the odds-on favourite to win the Calder Trophy as the rookie of the year. He’s just that good. Pettersson led the Canucks in scoring in the preseason with a goal and five assists in five games, and silenced any concerns with his ability to play centre in the NHL with a surprisingly refined two-way game.

While he may not top a point-per-game like Calder-winner Mathew Barzal last season, he’ll get plenty of opportunities at even-strength and the power play for the goal-starved Canucks. 30+ goals and 60+ points is not an unreasonable expectation for the slick Swede that teammates have dubbed “Alien” for his otherworldly skill.

He’ll have plenty of competition from the likes of Rasmus Dahlin, Andrei Svechnikov, and Eeli Tolvanen, but Pettersson has what it takes to wrest the rookie of the year title away from them all.

4 | Bo Horvat will lead the Canucks in scoring

While Bo Horvat was not named captain heading into this season — the team chose to go with no captain and four alternates — he is undoubtedly the team’s leader on the ice. In 2018-19, he will prove it, once again leading the team in scoring after Boeser did so last season.

The addition of Jay Beagle may not help the Canucks win more games, but it will divest Horvat of most of his defensive and penalty killing duties, allowing him to focus solely on offence. In addition, the power play will depend on his ability to play down low and in front of the net and he’ll chip in points setting up Pettersson and Boeser, as well as banging in their rebounds.

30 goals and 70 points is a bold prediction for Horvat, but it’s not out of reach.

2:51 - In seven preseason games, the Canucks held the lead for just 2 minutes and 51 seconds. For the rest of the time, they were either tied or trailing. Fortunately, they changed that trend significantly in their season opener.

1,465 - The Canucks went 1,465 games with at least one Sedin twin in the lineup. That streak was broken on Wednesday night.

A tap of the stick to Jim Benning for following through on his words. Tyler Motte was one of the standout players for the Canucks in the preseason, so Benning waived veteran Sam Gagner to make room for the younger player.

I’m dropping the gloves with the Canucks for not naming a captain this season. Instead, Bo Horvat, Alex Edler, Chris Tanev, and Brandon Sutter will all be alternate captains. Really, everyone already treats Horvat like the captain, so it seems silly not to make it official. Perhaps they’ll sell more jerseys if they give him an “A” before giving him the “C” next season.