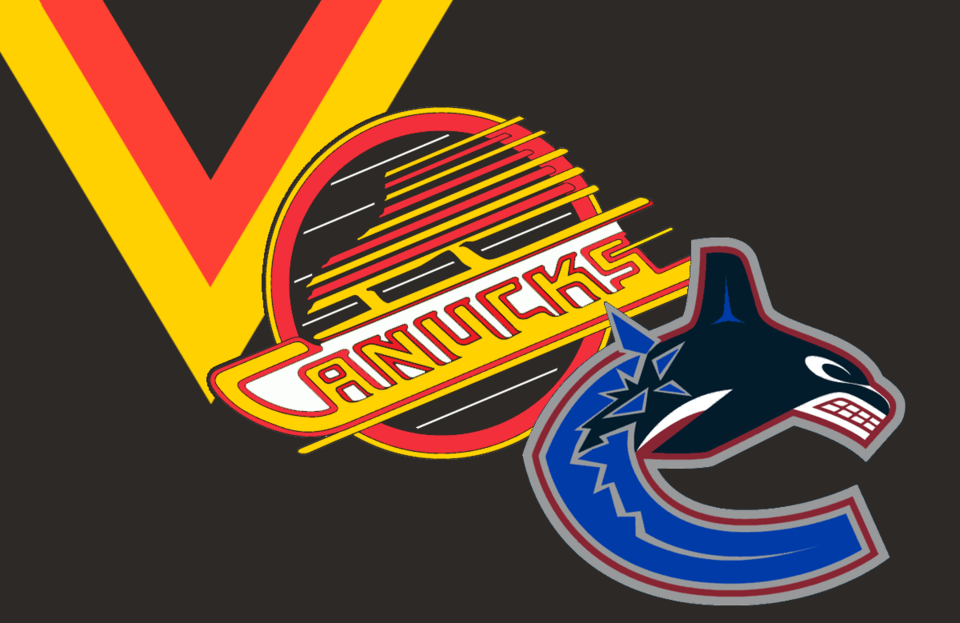 The Vancouver Canucks 50th anniversary won’t take place until the 2019-20 season, but a major piece of the preparations fell into place this past week.

The NHL requires advance notice when it comes to new jerseys, even if they’re just alternate jerseys that are worn on special occasions. The league needs to approve these things, like conservative parents hemming and hawing over their daughter’s choice of prom dress. It’s a long process.

The Canucks want to have a retro third jersey for their 50th anniversary, to go with their current home and away jerseys with the orca logo on the front, “Vancouver” wordmark overtop, and blue and green colour scheme. The issue for the Canucks is that they have a long history of jerseys and logos that look nothing like each other. No other team in the NHL has such a wild collection of clashing colours.

So, which of those many, multifaceted jerseys would they submit to the league?

In order to decide, the Canucks held a fan vote between three options and, if you ask me, there was something a little fishy about it.

The first option was the “Flying V” jersey worn by Stan Smyl, Thomas Gradin, and Richard Brodeur during their unlikely run to the 1982 Stanley Cup Final. The second was the “Flying Skate” — otherwise known as the plate-of-spaghetti — jersey sported by Pavel Bure, Trevor Linden, and Kirk McLean when they took the New York Rangers to Game 7 in the 1994 Stanley Cup Final. Finally, there was the original Orca jersey introduced along with Mark Messier in 1997 in navy blue, maroon, and grey.

The winner? The Flying Skate from the 90’s, which shouldn’t come as a surprise to anyone. It wasn’t even close: when the voting closed, the Skate had over 16,000 votes, while the second-place Flying V had less than 5,000.

Let’s face it: it wasn’t a fair fight.

The original orca jersey is associated with the heyday of the West Coast Express — when Markus Naslund, Todd Bertuzzi, and Brendan Morrison were arguably the best line in the NHL — but also with the messy Messier era and years of playoff disappointments. Also, with the orca logo currently in use by the Canucks, the chances of fans choosing the same logo, albeit in different colours, as a throwback jersey were minimal-to-none.

Meanwhile, the “Flying V” jersey is an oddity only appreciated by connoisseurs of the bizarre. It’s an utterly unique jersey unlike any other in sports history, which has earned it a few fans, but also plenty of derision over the years. It makes frequent appearances on lists of the worst sports jerseys of all time.

Against the Flying Skate, they didn’t stand a chance. The Skate evokes intense nostalgic feelings for one of the most popular teams in franchise history. It’s the jersey of Bure, Linden, Cliff Ronning, Jyrki Lumme, and Greg Adams. It’s experienced a revival in popularity as “retro” has come into fashion, with the logo a frequent sight at Rogers Arena and throughout BC.

Against two lame duck opponents, the Skate glided to an easy victory. It was like setting up a hopeful prizefighter with a series of journeyman boxers to build an “undefeated” resume.

It’s almost like the Flying Skate was the choice the Canucks wanted the entire time.

If the the “Flying Skate” had been up against some tougher opponents, then it might have been a closer vote. The Canucks had other options, such as the original stick-in-rink jersey, but what might have really put up a fight is a variation using the old Johnny Canuck logo from when the Vancouver Canucks were in the WHL. It’s a logo that has a lot of support in the Canucks fanbase, with many eager to see it become the main logo.

That’s a retro look that could put up a fight against the Flying Skate. It’s too bad we’ll never see it put to a vote.

A tap of the stick to Jack White, who advocated for the Flying V jerseys at his concert in Vancouver on Sunday. Sure, it wasn’t the most popular choice, but it showed he was paying attention to what was happening in Vancouver.

I’m dropping the gloves with NBC, who won’t be airing any Canucks games on national television in the US. Only the Canucks and Senators won’t have any games aired nationally in the US. Unfortunately, that seems pretty fair, considering they’ll likely be two of the worst teams in the league next season.

69.7 - It was an overwhelming victory for the Flying Skate in the fan poll, as it took 69.7% of the vote. Despite plenty of fond memories for Markus Naslund, the original Orca received just under 10% of the vote.

12 - The Flying Skate is one of the most popular jerseys in Canucks history, and it’s also the longest running. A version of it was worn for 12 years, from 1985 to 1997, which will stand as the longest run for one Canucks jersey until the 2019-20 season, when the current jerseys will overtake it.