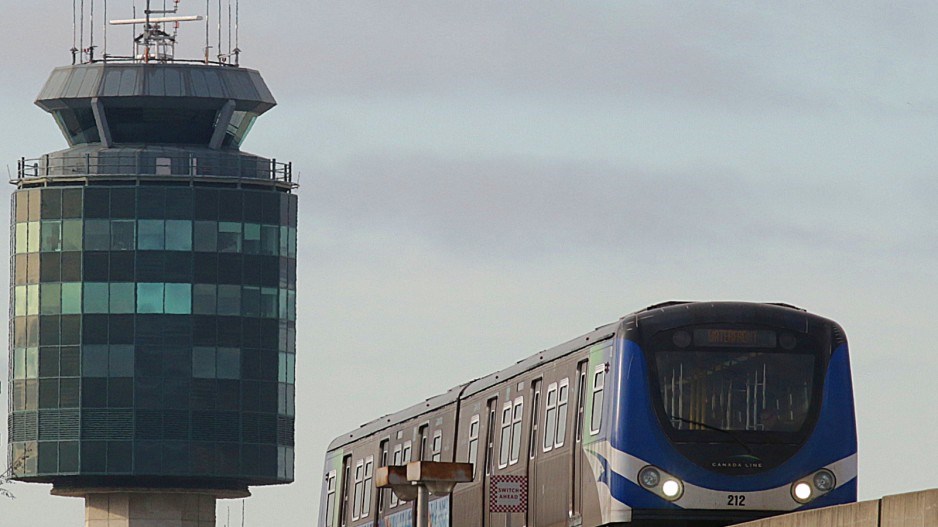 Vancouver International Airport contributed $300 million towards the $2 billion Canada Line, which transports about 21 per cent of the airports passengers to and from the airport. Photo Rob Kruyt/Business in Vancouver

For anyone who commutes daily between Vancouver and Richmond or Squamish, or the Lower Mainland and Vancouver International Airport (YVR), it’s difficult to imagine, or remember, what life was like before the Canada Line and Sea-to-Sky Highway improvements.

Both transportation projects had languished on government drawing boards for more than a decade. It wasn’t until Vancouver announced plans to bid on the 2010 Winter Olympic Games that the provincial government pushed them to the top of the priority list and determined to get both projects done in time for the Games.

“Governments had long been contemplating drastic improvements to the highway all the way back into the 1980s,” said Whistler Mayor Jack Crompton. “The Olympics really were the catalyst to see some of that planning become a reality.”

The lasting impacts of the $600 million Sea-to-Sky Highway improvement project between West Vancouver and Whistler, and the $2 billion transit line between Richmond, Vancouver and YVR are hard to overstate.

“I would characterize it as city-changing — it is that significant,” Richmond Mayor Malcolm Brodie said of the Canada Line. “We have exceeded all the projections for growth in terms of residential construction.”

“Ridership has been strong since it opened, and regular weekday ridership has grown 25 per cent since then,” said TransLink CEO Kevin Desmond.

Neither the Sea-to-Sky Highway nor the Canada Line were formally required as part of the bid. But without them, the bid might have failed, said John Furlong, who was CEO of the Vancouver Organizing Committee for the 2010 Olympic and Paralympic Winter Games (VANOC).

According to Furlong, the late Jack Poole, who was VANOC’s chairman, warned provincial officials that the transportation projects could mean the difference between a successful and unsuccessful bid.

“And I remember Jack sitting talking to government ministers about the road. He said, ‘Look, we’ll do the bid without the road… but our chances of winning are going to be diminished huge.’ So the government decided to get off this 10-, 12-, 15-year path and fast-track that decision and go do that road.”

According to the Ministry of Transportation and Infrastructure, since the highway improvement project was completed in 2009, collisions on the highway dropped from an average of 94 per year to 70, despite a 25 per cent increase in traffic.

The highway improvements, and the global attention that the Games focused on Whistler, have had a lasting impact on the mountain resort town.

The Sea-to-Sky Highway was a boon for other communities along the highway as well, including Squamish.

“If you look at the housing developments there — the growth of Squamish — the Sea-to-Sky Highway really changed the accessibility of Squamish, and that’s, I think, one of the really important legacies,” said David Gillen, director of the Centre for Transportation Studies at the University of British Columbia’s Sauder School of Business.

“It certainly opened up the opportunity for more development that allowed people who would have liked to live in a mountain or peripheral city environment, but still be able to commute into Vancouver, and the Sea-to-Sky Highway ended up providing that accessibility.”

Gillen noted that both the Sea-to-Sky Highway and the Canada Line projects were built as public-private partnerships, and that both came in on time and on budget.

In fact, the Canada Line went into operation three months ahead of schedule. And critics who warned that the ridership projections were overstated were proved wrong pretty much from Day 1. Ridership on the Canada Line has consistently exceeded projections, so much so that TransLink recently added four new trains to increase capacity by 15 per cent.

The Canada Line didn’t just address traffic congestion between Richmond and Vancouver. It also became an artery for the heart of Richmond and has prompted billions of dollars in new investment, clustered around Canada Line stations.

Last year alone, nearly $1 billion was spent on new development in Richmond, Brodie said — much of it along the Canada Line corridor.

The City of Richmond’s community plan from the early 1990s envisioned transit-oriented development in the city centre. But a plan by the Social Credit government to build a rapid transit line into Richmond was shelved by the B.C. NDP government, which funded the SkyTrain Millennium Line instead.

It wasn’t until Vancouver bid on the Winter Games that the Gordon Campbell Liberals agreed to fund the Richmond-Airport-Vancouver line — later dubbed the Canada Line — and the city’s transit-oriented plan would become a reality.

“Had it not been for the Olympics, it might be built by now, but it wouldn’t have been built at the time,” Brodie said.

The transit line has been a boon for YVR, which contributed $300 million towards the $2 billion capital costs. About a quarter of the airport’s 26,500 employees use the Canada Line to get to work, and about 21 per cent of the airport’s passengers use it, said Andrew Grams, director of parking and ground transportation for YVR.

Not all businesses along the Canada Line benefited from the project. In fact, some businesses along Cambie Street in Vancouver went bankrupt. They are still in the courts trying to collect reparations for disruptions they suffered during three years of construction.

While the underground section of the Canada Line through Vancouver was built largely with a boring machine, the section running along Cambie Street was built using a cut-and-cover approach.

The disruption to traffic and parking along Cambie went on for three years, resulting in 39 bankruptcies and hundreds of thousands of dollars in losses to small businesses, according to Park Theatre owner Leonard Schein, who represents the affected Cambie Street businesses. He said close to 90 small-business owners and 40 landlords were affected by the project.

Other than the Cambie section, however, the Canada Line has been a boon for businesses and developers along it, especially on Marine Drive.

“We too would say that the Canada Line was a game-changer,” said Dale Bracewell, manager of transportation planning for the City of Vancouver. “Marine Gateway at Marine Drive is one of the biggest developments that we’ve seen over the last five, 10 years.”

In Richmond, a dozen new high-rises are proposed for the south end of Richmond Centre, and Vanprop Investments plans to demolish Landsdowne Centre mall and develop its 50-acre site on the east side of the Landsdowne station as a new 24-tower mixed-use residential development.

“Obviously it’s — if not the No. 1 — one of the integral catalysts for the redevelopment of the centre,” Vanprop vice-president of development Jesse Galicz said of the Canada Line. “Multi-family, phased transit-oriented development like ours — mixed-use development — really relies on access to transit.”