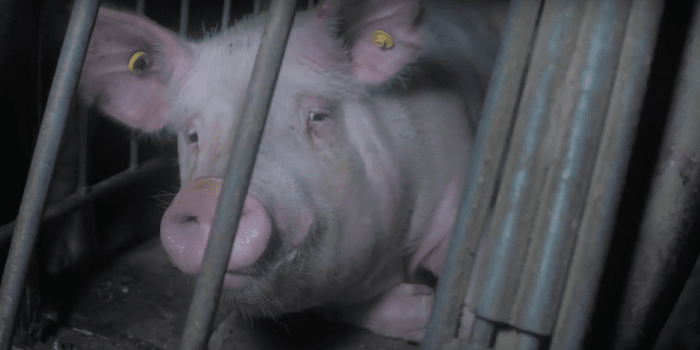 PETA has released a video that they claim to have secretly shot at the Excelsior Hog Farm in Abbotsford that shows horrific conditions for pigs.PETA

Warning: This post contains a graphic video as well as graphic details regarding alleged animal abuse.

PETA has released a video that they claim to have secretly shot at the Excelsior Hog Farm in Abbotsford that shows horrific conditions for pigs.

The animal rights organization claims that sows were forced to give birth, “in farrowing crates hardly bigger than their bodies,” and that the sows were unable to tend to their babies in the first week of their lives. As a result, many of the piglets died and were, “forced to live alongside their dead and rotting littermates.”

Further, they state that the recording shows severely injured pigs, including some with bloody lacerations and volleyball-size umbilical hernias. They liken the abuse to, “suffering in dungeon-like conditions.”

According to PETA, the farm sends their pigs to Johnston’s, a Chilliwack-based slaughterhouse that claims to work only with suppliers raising pigs under a “clear standard of care” and according to “best treatment practices.” From there, Johnston’s sends pork to various retailers across B.C. including Choices Markets and SuperValu.

“Mother pigs at Excelsior Hog Farm spend their wretched lives inside cramped metal crates, unable to turn around or attend to their piglets, many of whom are left to die slowly, just out of their reach,” says PETA Senior Vice President of Cruelty Investigations Daphna Nachminovitch.

“No meal can be worth the enormous suffering of these intelligent animals who are capable of feeling pain and fear, just as we all are.”

PETA has asked the SPCA to conduct an investigation into the abuse, and have asked Johnston’s to reconsider its relationship with the farm.

According to the province’s Prevention of Cruelty to Animals Act Part 2.1 Section 9.1, “A person responsible for an animal must care for the animal, including protecting the animal from circumstances that are likely to cause the animal to be in distress.”