MDMA, cocaine and LSD among the drugs checked to ensure users know what they’re getting
Apr 16, 2019 4:20 PM By: John Kurucz 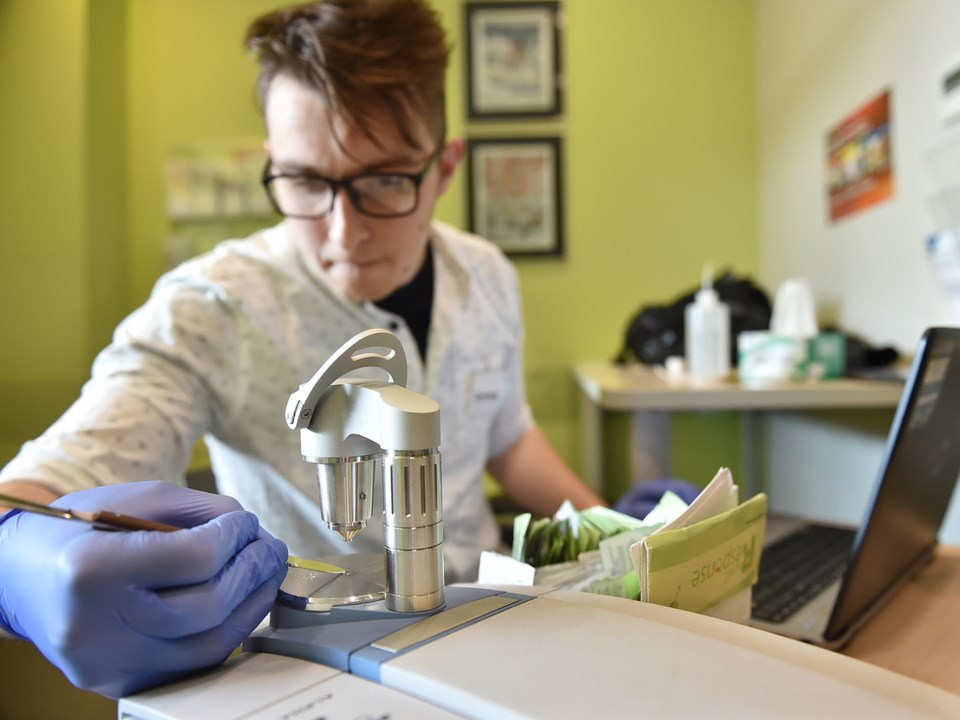 The equivalent population of a small Canadian city has died in the three years since a public health emergency was declared, and the days of trusting a guy who knows a guy are over.

Harm reduction advocates and public health officials time and again say the root cause of the opioid crisis is inextricably linked to a toxic drug supply.

A first-of-its-kind pilot project is attempting to mitigate that issue in a neighbourhood removed from ground zero in the Downtown Eastside.

A six-week drug-checking program is taking place each Friday afternoon at the Robert and Lily Lee Community Health Centre near Broadway and Commercial Drive.

It’s the first time a drug-checking program has taken place in Vancouver outside of the Downtown Eastside. The Courier was invited to the health centre to watch the testing process play out and speak to harm reduction personnel overseeing the program.

“People get their drugs checked to make sure that they know what they’re taking — a big issue is not getting the drugs that you think you were sold,” said Jeremy Kalicum, a drug checking operational technician with the B.C. Centre on Substance Use (BCCSU).

Kalicum’s job title is a fancy way of saying he’s the person tasked with examining the chemical makeup of any given sample. He does so using a Fourier-transform infrared spectrometer (FTIR) machine, which doesn’t look much different than your everyday microscope.

The FTIR machine shoots lasers at a sample, which is then cross referenced against 10,000 different chemicals found in the machine’s database. All samples are tested for fentanyl via a fentanyl test strip as well.

Once the roughly five-minute process is done, those bringing in the drugs are linked up with harm reduction staff from the advocacy group Karmik. Sometimes the drugs are disposed of altogether, or the discussion looks ahead to the coming hours: don’t use alone, have a naloxone kit, use smaller amounts and be accompanied by a sober companion.

“Stigma has always been a challenge to work with,” said Sebastien Payan, an overdose emergency response nurse with Vancouver Coastal Health. “Listening comes first. You have to understand what someone’s fears are when they aren’t compassionate. You need open dialogue.”

LSD, cocaine and MDMA came through the doors in the hour the Courier was on hand April 12. All in, seven people attended the clinic and none of the 19 different samples tested contained fentanyl. Three naloxone kits were also distributed.

Vancouver Coastal Health, the Portland Hotel Society, Karmik and BCCSU are all involved in the pilot program. It began in mid-March, and 31 people had used the service as of April 12.

Public Health Agency of Canada stats released April 10 indicate that 10,300 Canadians died from an opioid overdose in the period spanning January 2016 to September 2018.

Fentanyl was found in 85 per cent of B.C. toxicology tests last year, the first time in three decades where life expectancy in B.C. was expected to drop. The vast majority of those who fatally overdosed in 2018 — almost 60 per cent — died in a private residence.

“If you have an overdose outside of the Downtown Eastside, you’re exponentially more likely for it to be fatal,” said Michelle Tucker, a volunteer coordinator with Karmik. “We need services available so that people don’t have to go outside of their comfort zone for access. The Downtown Eastside can be a very intimidating place for young people, students or other people who aren’t familiar with that realm.”

The pilot project ends with a final session on April 26. After that, numbers will be crunched and anecdotal data based on staff observations will be collected to assess whether the program will be expanded to other areas in Vancouver and beyond.

“Even if it’s not a community centre, I’d love to see examples of drug checking at local events in the city — events in the parks, music events, community art events,” said Karmik co-founder Munroe Craig. “We want to see drug-checking supportive services go anywhere they need to go.”