12th Street between Nanaimo Street and Sixth Avenue closed to all traffic after tenant barricades themselves in suite
Jul 23, 2018 3:41 PM By: Cayley Dobie 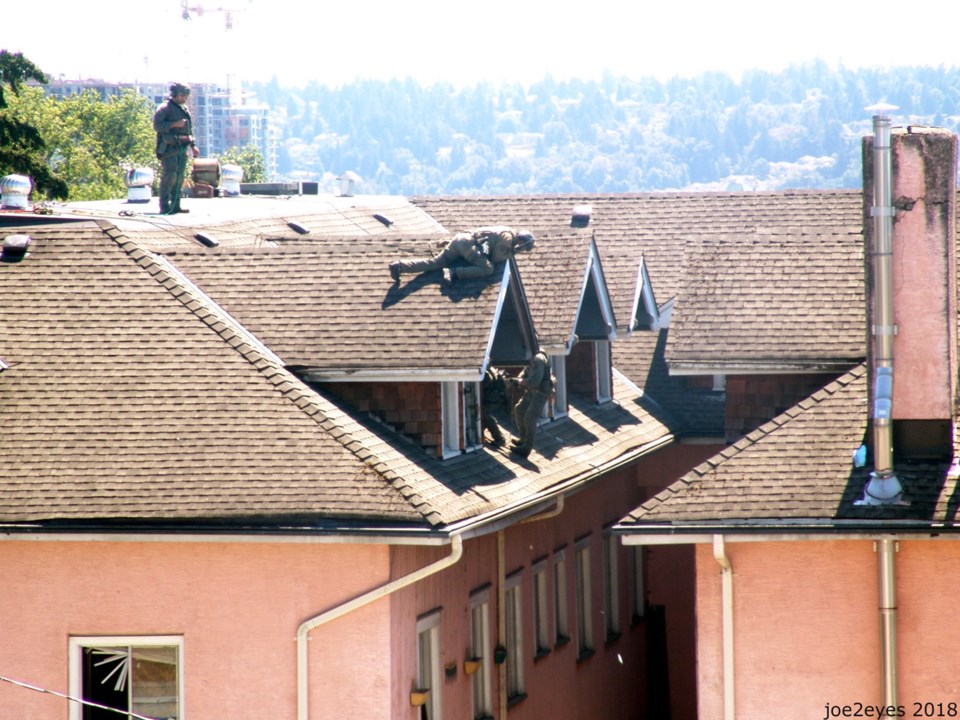 Members of the Lower Mainland Emergency Response Team were in New Westminster on Sunday responding to an incident at an apartment building at Sixth Avenue and 12th Street. Duane Yablonski took this photo from his home across the street.Duane Yablonski

Officers with rifles and face shields descended on an apartment building on Sunday morning after one of the residents barricaded themselves in their suite.

The incident happened around 12:30 a.m. on Sunday at an apartment building at Sixth Avenue and 12th Street. Duane Yablonski, who lives about a half of a block up from the building, said he first noticed the police activity shortly before 1 a.m.

“I just happened to look out my south facing window and noticed quite a high police presence at this building,” he said.

Yablonski said there were four police cars lined up in front of the building, but only one had its lights on. None had their sirens going, he added.

“They certainly weren’t making a big show of it,” he said.

It was mid-morning when Yablonski woke up. He went to look outside and to his surprise, the officers were still there, he said.

“Everything was shut down,” Yablonski told the New Westminster Record.

Police had closed 12th Street between Nanaimo Street and Sixth Avenue to all traffic, and there were more officers gathered around the building, including officers with the Lower Mainland Emergency Response Team (Canada’s version of SWAT), according to Yablonski.

At one point, he said he could see officers rappelling from the roof of the building down to the window of a unit on the top floor. That’s when one of the officers placed a large metallic sheet on to the window, Yablonski said.

“Wham! It went off, and you could feel the shockwave,” Yablonski said. “There was a big blast of blue smoke and all that.”

About 25 minutes later, around 1 p.m., the officers had cleared out of the area and the road was reopened. Yablonski said he saw someone in a yellow jumpsuit being escorted from the building into a waiting vehicle, but that’s it.

It’s believed a tenant in the building had barricaded themselves in their unit. It’s unclear if any threat was made to prompt the police response. Calls to the New Westminster Police Department have not been returned at this time.

Go to NewWestRecord.ca for updates and other news from New Westminster.