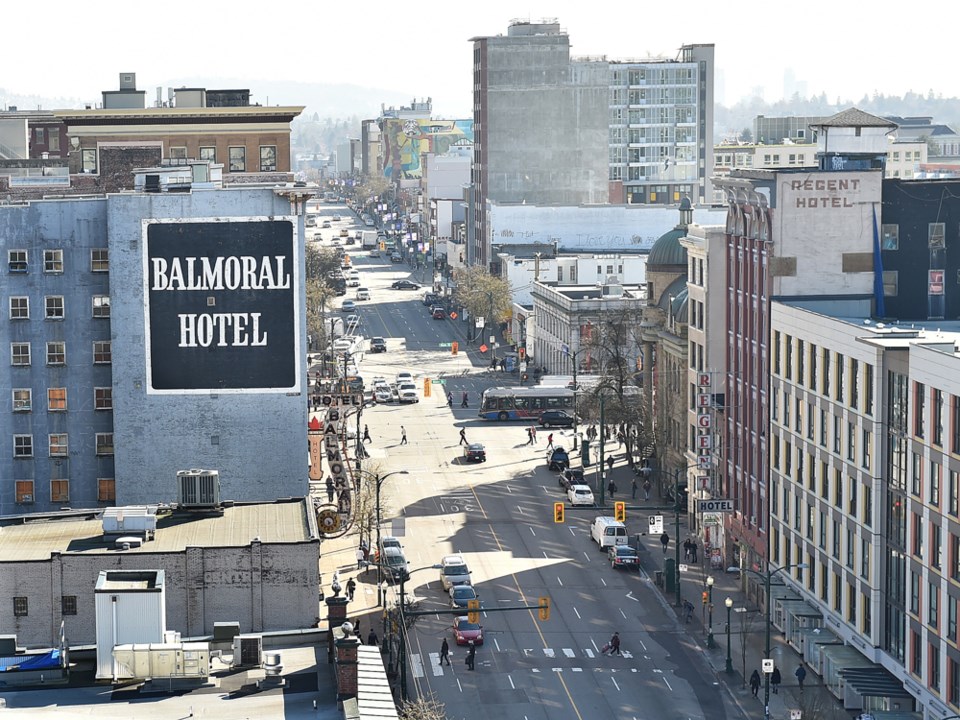 The Balmoral and Regent hotels on East Hastings have been at the top of the city's list for problem hotels for almost 20 years. Photo Dan Toulgoet

A low-income hotel in the Downtown Eastside that has been at the top of the city's list of problem hotels for almost 20 years generated more than 800 police calls in a recent 14-month period.

Statistics posted on the Vancouver Police Department's website show officers responded to 845 calls in and outside the Regent Hotel at 160 East Hastings St. between Jan.1 2017 and Feb. 22, 2018.

The statistics, which were obtained under the Freedom of Information and Privacy Act and posted recently on the VPD's website, come as the hotel has been under new management for less than two months.

The nonprofit Atira Property Management signed a six-month lease with the Regent's owners, the Sahota family, to begin managing the 150-plus room building Feb. 15.

Janice Abbott, the CEO of Atira, said she wasn't surprised by the number of police calls to the hotel, noting its notorious history with police for crime and the city for a series of infractions related to fire hazards, plumbing, electrical, structural damage and rodent and pest infestation.

"It's a massive job and we've actually come along way since Feb. 15, and we have a long way to go," said Abbott, who described the hotel's condition as "abysmal." "There's so many people coming and going, and there's so many ingress points into the building—fire escapes, other places."

Added Abbott: "Just trying to figure out who is actually a tenant and getting people signed up in [rental tenancy] agreements has been huge."

She said her staff is working with B.C. Housing, Vancouver Coastal Health, the VPD and government ministries to get a better handle on the needs of tenants and ensuring they're safe.

Assessments of older tenants, who may require assisted living, is ongoing as is determining why many children are in the building, some of whom have family while others are there for reasons not clear to Abbott.

Fixing door jams, installing locks on doors have been some immediate fixes. The elevator is working and Atira staff is slowly gaining more control over the building, Abbott said.

"I only agreed to do a six month lease because I wasn't sure what we were getting into," said Abbott, noting Atira has an option to renew after six months. "We don't pay anything to lease the building. So any money we have, helps to cover our costs and chip away at building maintenance issues."

Over the years, the city has filed dozens of charges against the Sahota family related to the poor condition of the Regent. Last spring, the city filed more than 60 charges under the standards of maintenance bylaw.

Paul Mochrie, the city's deputy city manager, said the city has court dates in October for prosecutions against the Sahotas related to the Regent and the Balmoral, the family's other hotel across East Hastings street.

The city forced the Balmoral to close in June 2017 after engineering reports concluded it was in danger of collapsing. The Sahotas hired an engineering firm to stabilize the hotel but have not done any work to fix up the rooms.

"It's a multi-million dollar renovation that that building will require," Mochrie said. "In terms of [the Sahotas'] willingness to do that, their capacity to do that, I can't speak for them. But at this point in time, we don't foresee that building opening any time in the near future."

The Courier spoke to a man Thursday who answered the phone at the Sahotas' Shaughnessey home, but he hung up without answering any questions.

The Regent is also the subject of a class-action lawsuit brought on by tenants.

In November 2016, the city released a list of the top-10 worst single-room-occupancy hotels. The Balmoral was first with 144 violations and the Regent was second with 64. The Regal, Cobalt and Astoria hotels rounded out the top five and are also owned by the Sahotas.

In 1999, many of the some hotels were identified by police as the worst in the city.

Mochrie said he is aware of the Regent and Balmoral's long history of being atop the city's list for problem hotels in Vancouver. He pointed to poor management as a direct link to the hotels maintaining their ranking.

"We now have an organization in there that are professional property managers that really know these types of buildings, they know this tenant group and are very capable of working with them," he said. "So we would expect those calls to definitely come down."