Vancouver police say there has been a “noticeable decrease in street disorder and violent crime” in the Downtown Eastside since the department increased foot patrols last month.
Feb 13, 2018 3:19 PM By: Jessica Kerr 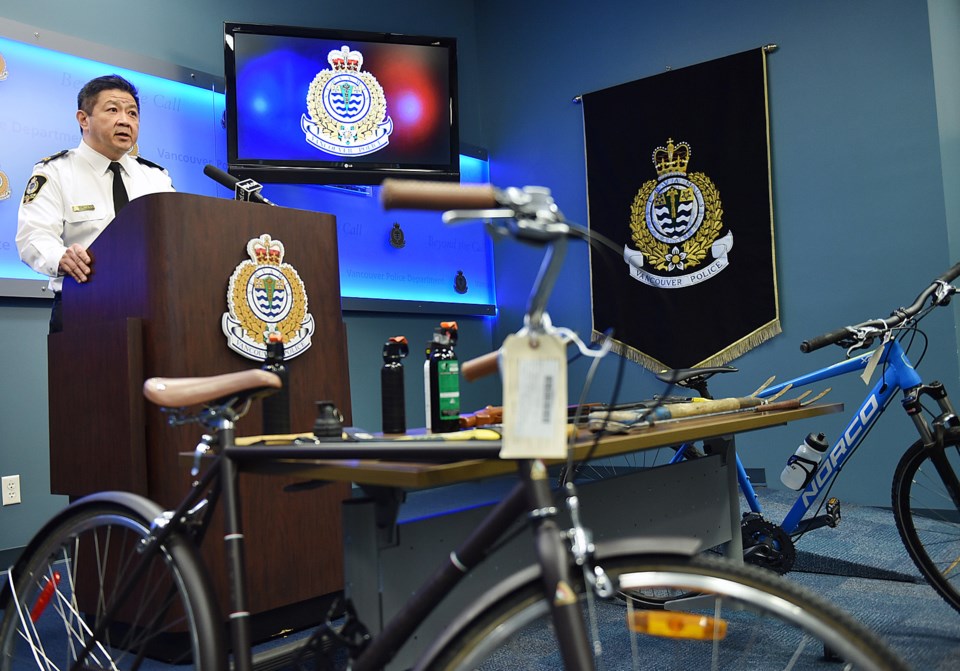 Deputy Chief Howard Chow speaks to the media. On display is a number of items that have been seized since the department stepped up patrols in the Downtown Eastside. Photo Dan Toulgoet

Vancouver police say there has been a “noticeable decrease in street disorder and violent crime” in the Downtown Eastside since the department increased foot patrols last month.

“When incidents occur, we’re there ready to respond,” Chow said.

In one case over the weekend officers witnessed someone being stabbed in the neck in the 3300-block East Hastings. The officers were able to quickly give first aid to the victim, as well as arrest the suspect.

“We are pleased with the positive change this initiative has brought to the Downtown Eastside so far,” Chow said at Feb. 13 press conference. “Violent crime is down and residents and merchants are able to use the sidewalks again. We have received positive feedback from the community and our officers will continue to work with residents and businesses to make the area a safer place to live, work and visit.”

Chow said the increased patrols have led to several seizures of weapons, drugs and stolen property.

“It has become apparent that people from outside of the area have been taking advantage of residents by offering them cash to steal desirable goods,” he said.

Tony Hunt, general manager of loss prevention for London Drugs, said the store’s Downtown Eastside location sees up to four times the amount of loss seen at other locations. He said since last February there have been 11 assaults on staff.

He said people are often shoplifting large quantities of items, thousands of dollars’ worth of candy, food items, dozens of packs of razors at a time.

“They’re stolen because there’s profit to be made from these things,” he said.

Following the department’s announcement last month, Landon Hoyt, executive director of Hastings Crossing, one of the business improvement associations in the Downtown Eastside, said the increased police presence is needed.

Lenée Son, coordinator of the Carnegie Community Action Project, said the more police in the area means the potential for more violence against the neighbourhood’s marginalized population, adding that segment of the community is often forgotten when it comes to public safety.

She added that the organization has been lobbying the city to take money that would be invested in police initiatives and put it into things like social housing.