Political hopefuls expected to get the Green light 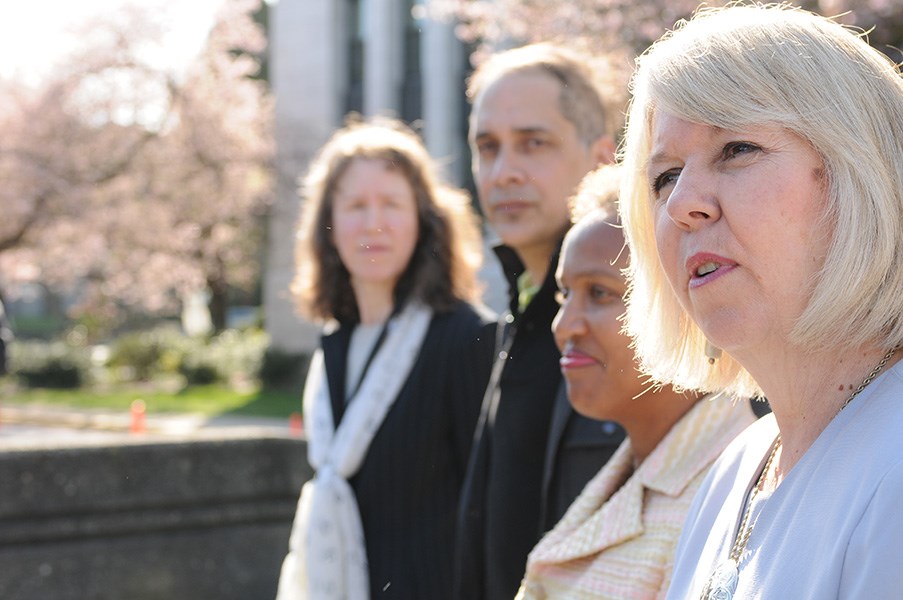 Two community activists with deep political roots are among four nominees expected to get the nod from the Green Party to run for city council in this November’s civic election.

Pete Fry, whose mother is Vancouver-Centre Liberal MP Hedy Fry, and Cleta Brown, the daughter of the late Rosemary Brown — the first black woman in Canada to be elected to a provincial legislature — announced their intentions Monday on the back steps of city hall.

“We try not to talk about the specifics of partisan politics too much because it makes for a much happier family time,” said Fry, chairperson of the Strathcona Residents Association, when asked about his mother’s reaction to his decision to seek political office. “But she is rather pleased to see that the apple doesn’t fall far from the tree. I wouldn’t say that I’m a card-carrying federal Liberal but I am proud of the work that my mom has done.”

Fry and Brown joined Tracey Moir, founder and chairperson of the Oakridge-Langara Area Residents Association who campaigned against the Oakridge Centre redevelopment, and current Green Party Coun. Adriane Carr to round out the four nominees chosen by their party’s screening committee.

The Green Party will hold its nomination meeting May 4, where the four candidates are expected to go uncontested in their bids. Nominees for school board and park board will be announced at a later date.

The party hasn’t ruled out running a mayoral candidate but doesn’t appear interested in seeking a coalition with Vision Vancouver, the NPA or COPE. Vision has dominated city hall since voters gave them a majority in 2008. The NPA holds two spots on council, Carr is the lone Green Party member and COPE got shut out of council in the 2011 election.

“Any such coalition would need to be approved by our members,” said Jacquie Miller, chairperson of the Green Party’s Vancouver chapter. “Our members’ current feeling is not to seek a coalition and this is largely because we get our support from across the spectrum. Greens are collaborative at every level — internationally, nationally, provincially and locally — and it’s best for us to be able to keep those open working relationships with whoever gets elected.”

Though the Green Party brand is familiar to most Vancouverites, the party’s disadvantage going into this year’s vote will be its inability to compete financially with the million-dollar-plus campaigns of Vision Vancouver and the NPA.

Carr, however, pointed out her budget was under $10,000 in the 2011 campaign and she managed to squeak out the 10th and final spot on council. Unlike Vision and the NPA, the Green Party has a policy not to accept donations from developers, which are big backers of the two mainstream parties.

“You don’t need a lot of money if your profile is good and you’ve got a lot of foot soldiers out there,” Carr said. “What we hope to do is make up for the money with lots of volunteers.”

The Green Party didn’t outline its platform Monday but the common concerns expressed among the nominees were to better address affordability and homelessness in Vancouver and improve transit.