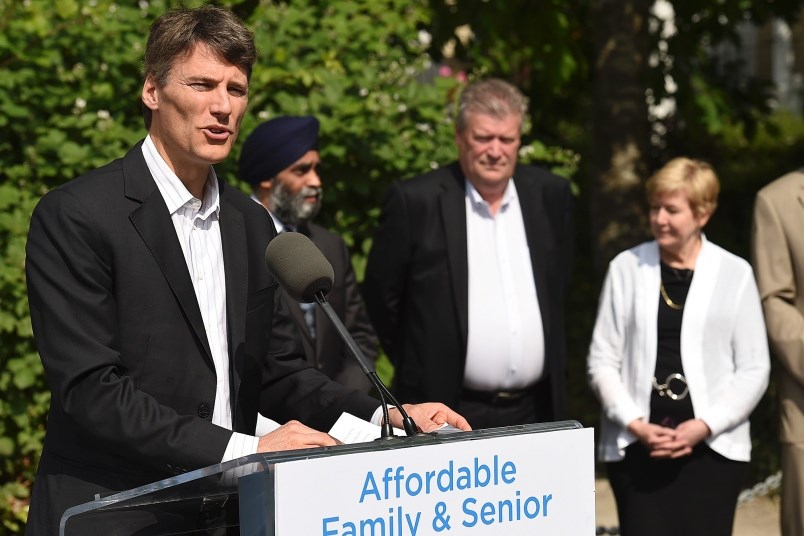 Mayor Gregor Robertson returns from vacation this week to learn a new poll suggests he has the lowest approval rating of big city mayors in Canada.Dan Toulgoet photo

A new poll suggests Mayor Gregor Robertson has the lowest approval rating in the country when compared to nine other big city mayors, while city council finishes second to the bottom ahead of Edmonton.

Mainstreet Research released poll results Monday that showed 50 per cent of 614 people polled in Vancouver between Jan. 3 and 4 approved of the job Robertson was doing as mayor. Only 44 per cent approved of Vancouver council’s performance.

Ottawa Mayor Jim Watson had the highest approval rating at 79 per cent, while Saskatoon Mayor Charlie Clark placed second at 72 per cent and Montreal Mayor Denis Coderre at 62 per cent. Ottawa council ranked the highest at 64 per cent.

But when results are divided into how many respondents “strongly approve” of the job the country’s 10 mayors are doing, Robertson finishes in first at 41 per cent. It’s only when you add the “somewhat approve” numbers that Robertson’s rating doesn’t go up significantly, totalling 50 per cent.

“As a whole, he’s not doing great – he’s at 50 per cent,” said David Valentin, executive vice-president of Mainstreet, a polling firm based in Ottawa with offices in Calgary, Toronto and Montreal. “But the 50 per cent he has, really, really like him.”

Vancouver council received a 23 per cent “strongly approve” rating and 21 per cent “somewhat approve” for a total of 44 per cent. Though dominated by the mayor’s Vision Vancouver party, council also has three NPA members and a Green party councillor.

The questions Mainstreet asked of Vancouver respondents were: When you think about Mayor Gregor Robertson, do you approve or disapprove of the way he’s handling his job as mayor? The same question was asked about city council as a whole.

Respondents were not required to say why they approved or disapproved of the job Robertson was doing. So, if a person was upset about the city’s response to clearing snow and ice, and concerned that Robertson had not returned from vacation to face the public, that wouldn’t be recorded. As well, if a person strongly approved of Robertson’s campaign to stop Kinder Morgan from building a pipeline from Alberta to Burnaby, that would also not be captured in the data.

The margin of error for the Vancouver results was pegged at 3.95, plus or minus 19 times out of 20.

The mayor’s office was contacted on Monday but his media relations director said they would not comment on the poll. Robertson was expected to return from his vacation this week. Robertson was first elected in 2008 and was re-elected in 2011 and 2014, with Vision majorities on council. The mayor has said he plans to seek a fourth term in the 2018 civic election.

Vision Vancouver Coun. Kerry Jang laughed when told of the poll results, adding that he wouldn’t comment until he reviewed the results. Vision Coun. Raymond Louie reviewed the results and pointed out 41 per cent of respondents who “strongly approve” of the mayor’s work is a “good number,” possibly higher than his rating going into the 2014 election.

That said, Louie still believes the most important poll is on election day in 2018.

“Polls are wildly inaccurate,” he said, noting polls were wrong in predicting the results of provincial elections in B.C., Alberta and the U.S. election last November. “Polls aren’t necessarily reflective of what the public sentiment is in an accurate way.”

Louie said many voters in Vancouver are behind Vision’s push for more rapid transit, spending money on market, rental and social housing and battling Kinder Morgan’s pipeline project. Louie, who challenged Robertson in 2008 to be Vision’s mayoral candidate, has been a city councillor since 2002.

“These are things that people talk to me about, these are first-hand exchanges that I have rather than a poll that may or may not have framed their questions in a certain way to solicit a certain response,” he said.

NPA Coun. George Affleck echoed Louie’s concerns about the accuracy of polls but said the Vision Vancouver-led push in December to raise taxes to combat the fentanyl crisis and the mayor’s absence during the snowfall likely affected the poll’s results.

“And compared to my last term at this point, there’s definitely more anger towards the mayor and Vision than I’ve seen before,” he said, referring to letters and phone calls he’s received as well as feedback at various functions.

As for council’s 44 per cent approval rating, Affleck pointed out not everyone in the city is attuned to the fact that council is represented by three distinct political parties. So when he or Green Party Coun. Adriane Carr challenge or vote against Vision, that is not often widely known by voters.

“Generally, once the election is over, council is council and the mayor is the mayor,” he said.

Valentin suggested mayors who have served a long time in office could be more vulnerable to lower rankings, although he acknowledged Ottawa’s mayor, Jim Watson, had served previously before being re-elected in 2014 with more than 76 per cent of the popular vote.

Why is Watson so popular?

“Having lived in Ottawa, you see him everywhere,” Valentin said. “He goes to every event. There’s a great joke in Ottawa that he’ll tell you himself – Jim Watson will go to the opening of an envelope.”

Mainstreet also asked respondents questions about the fentanyl crisis, supervised injection sites and recreational drugs. Those results are expected to be released later this week. Valentin said Mainstreet also plans to conduct more polls this year about the job mayors and council are doing.

• Story courtesy of the Vancouver Courier