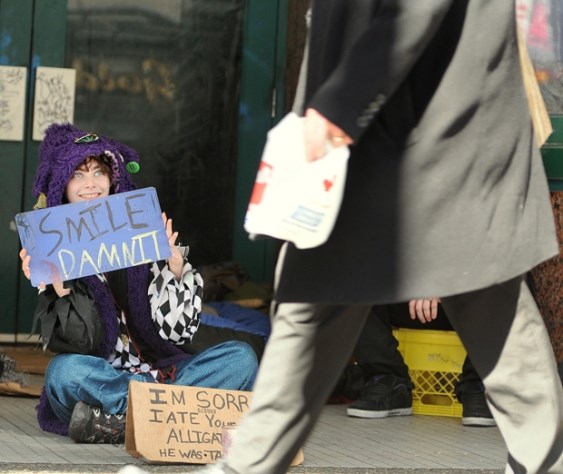 New research by a UBC professor shows what many anti-poverty advocates and people living in poverty say is obvious—being stressed over finances makes it hard to focus on other things.Dan Toulgoet

New research by a UBC professor shows what many anti-poverty advocates and people living in poverty say is obvious—being stressed over finances makes it hard to focus on other things.

The study, Poverty Impedes Cognitive Function,”which was published online last week by Science, found that obsessing over finances created up to a 13-point dip in IQ.

In one research experiment, farmers did poorer on cognitive tests before they were paid for their harvest as opposed to after. These differences were not explained by other factors such as nutrition.

According to Jiaying Zhao, the UBC psychology professor who conducted the study, while it is early days for this type of research, these results have plenty of implications for local government agencies.

For example, “if you can’t find housing, that can consume your mind,” she said “so policy makers should make procedures much easier for the poor.”

The study suggests the stress over limited resources means “less mental bandwidth” is available for steps, such as education, that could break the cycle of poverty.

Vancouverite Jessica Schafer, 26, knows the mental impact of financial stress all too well. Growing up, “worrying whether or not mom got to the food bank that day” made concentrating at school difficult she said. Schafer, who started college last year with plans to be a youth worker, said if social workers were aware of the cognitive consequences of financial stress they may be better able to help guide families out of poverty.

Adrienne Montani, the provincial coordinator for First Call, B.C. Child and Youth Advocacy Coalition said the study “does point to the need to not stress them [the poor] out more.”

The welfare and employment insurance processes in B.C. are punitive, she said, sending those in need through an obstacle course of people and complex forms rather than saying “how can we help you,” and making the system easier to navigate. “Poverty is not an individual thing,” she said, “poverty is a socially created condition and … social policy could change this.”

Montani said she worries the study may be misinterpreted as saying people in poverty are somehow less intelligent. Rather, the mental impairment the poor experience due to stress “would happen to anyone” put in the same position.

Ted Bruce, the co-chair of the B.C. Poverty Reduction Coalition, participated in the Welfare Food Challenge — an event where people who are not poor attempt to live on $26 for food for a week, said he too “was not surprised at all to see a link to low-income and health” shown by the study. He said he was extremely stressed during the experience. Those living in poverty are “constantly faced with hard decisions” that have huge consequence he said. Even the decision to spend two dollars on a cup of coffee, Bruce said, could be disastrous for a person on welfare because it drastically impacts their meagre budget. Poor people have so little to work with, he said, that they have to be constantly thinking about how to make what they do have last, leaving little mental energy for anything else.

Studies like this one support aggressive government action, he said, such as an overarching poverty reduction strategy, as opposed to the “a piece here and a piece there” strategy we have now, along with a comprehensive early childhood education system to protect against future poverty.