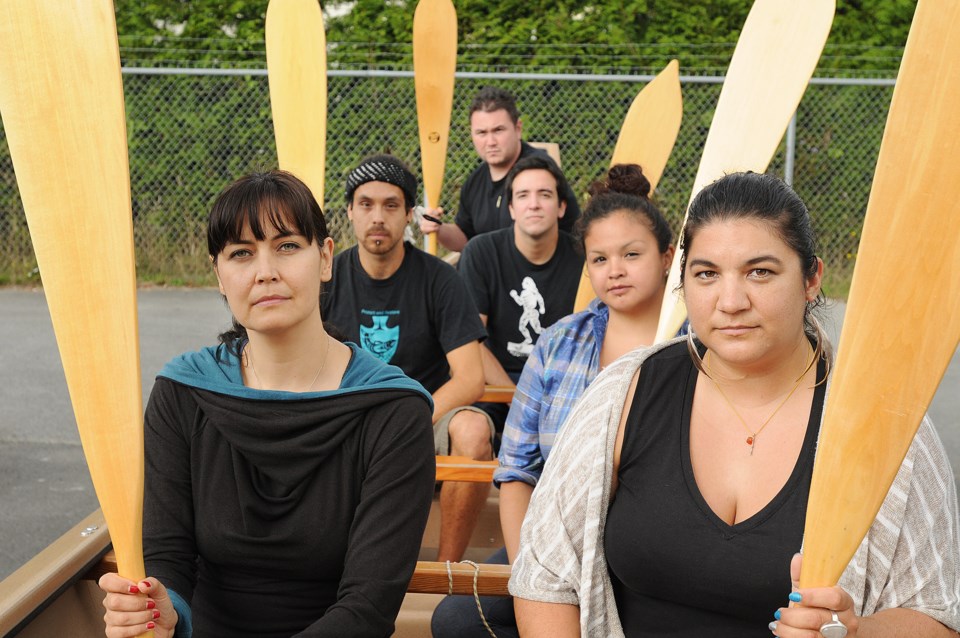 Rhiannon Bennett (r) says she’ll feel a sense of fierceness when she and others paddle a canoe across False Creek as part of the All Nations Canoe Gathering Sept. 17.Dan Toulgoet

When Rhiannon Bennett paddles a canoe across False Creek later this month with other Musqueam members in the All Nations Canoe Gathering, she’ll feel a sense of fierceness.
“Participating in the canoe gathering is an opportunity to show our pride and our strength as a people,” she said. “The fact there was government policy to kill the Indian in the child… and here we are, still here today and we’ll be getting out on our traditional waters in the traditional way and using our language and singing our songs... We survived those atrocities that were imposed upon us and that are still being imposed upon us.”
The Musqueam canoe is one of up to 50 craft participating in the Sept. 17 ceremony welcoming participants to historical Coast Salish lands for Reconciliation Week in Vancouver, Sept. 16 to 22.
Dawnda Joseph, canoe gathering coordinator for Reconciliation Canada, a non-profit initiative to further understanding of the legacy of the residential schools system, says former residential school students and aboriginal canoeists from Vancouver Island, the Sunshine Coast, Kamloops and Washington will paddle in cedar dugout and fibreglass replica canoes. They’ll be joined by kayakers and dragon boaters from school districts, the Jewish community and breast cancer survivors.
The paddlers will travel from Kits Point to the south side of Science World where they will acknowledge their invitation to attend the canoe gathering. Representatives of the Squamish, Musqueam and Tsleil-Waututh nations will grant them permission to come ashore to partake in the week’s activities.
Area waterways were the highways of Bennett and Joseph’s ancestors but Joseph said traditional practices were interrupted by the colonial system of assimilation.
She credits Expo 86 with prompting a resurgence of canoe gatherings. The Qatuwas Festival, which started in 1993, draws 100 vessels annually from Oregon to Alaska to the coast of Washington or B.C.
Bennett has had to work at reconnecting with her culture and canoeing has been a bridge to traditional teachings.
Her great-grandmother, who went to residential school, did not teach her children or grandchildren her language.
“There were quite a few teachings that she chose to walk away from and we are now at a point where we are trying to learn those things,” the 34-year-old said.
Bennett, who grew up on Musqueam’s traditional territory in Ladner, has heard traditional stories for the first time while training for the canoe gathering.
Indian residential schools in Canada opened in 1870 and the last one closed in 1996. More than 150,000 aboriginal, Métis and Inuit children were placed in residential schools, often against their parents’ wishes, according to Reconciliation Canada. Many were forbidden to speak their language and denied their culture. It’s estimated that more than 80,000 former students are living today. The impact of residential schools has affected generations.
Reconciliation Week complements Truth and Reconciliation Commission Canada events in Vancouver.
The message of Reconciliation Week is that we are all one.
“When you witness this procession of canoe vessels coming in and dragon boats and kayaks and all different shapes, colours, ages, religions, we’re all just one people and just to simply to enjoy the beauty of that,” Joseph said.
She hopes the canoe gathering will inspire more people to attend Truth and Reconciliation events and join the Walk for Reconciliation and New Way Forward, Sept. 22.
“The more you go, the more you know,” she said.
crossi@vancourier.com
twitter.com/Cheryl_Rossi