Intersection is closed to traffic and buses have been re-routed
Feb 24, 2020 4:05 PM By: Lindsay William-Ross 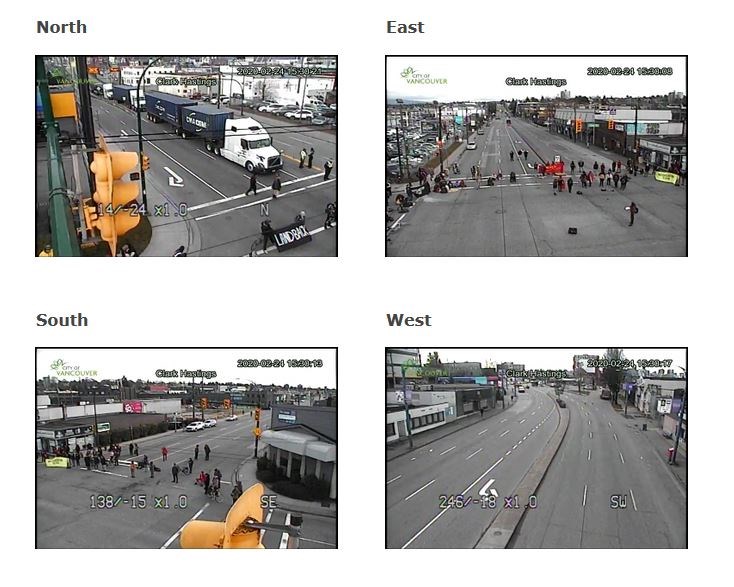 Camera views of the intersection of Clark and Hastings where protesters have blocked traffic. Screen grab City of Vancouver

Protesters have once again shut down the intersection of Clark and East Hastings in Vancouver.

Vancouver Police shared news of the demonstration and the subsequent traffic closure via Twitter just after 3 p.m. Monday.

#VanTraffic: The intersection of Clark Drive and East Hastings Street is currently closed. Traffic is blocked in both directions. Drivers are advised to consider alternate route. pic.twitter.com/I57wTi4jWO

Additionally, TransLink has posted that there are several bus route detours due to the march and protest in the area. Affected lines include the R5, 14, 16, 17, and 20. You'll find updates regarding the status of those transit changes via TransLink's Twitter.

Extinction Rebellion Vancouver has shared some live video from the protest site on their Facebook page.

The City of Vancouver's traffic cameras at Clark and East Hastings also show the protesters in the intersection.

The protestors are supporting First Nations opponents to a natural gas pipeline in northern B.C. The demonstration follows more than a week of protests across the country, including one in solidarity in Ontario that ended with arrests this morning.

This is not the first time opponents to the pipeline have chosen the intersection of Clark and Hastings, due to its access to the Port of Vancouver.