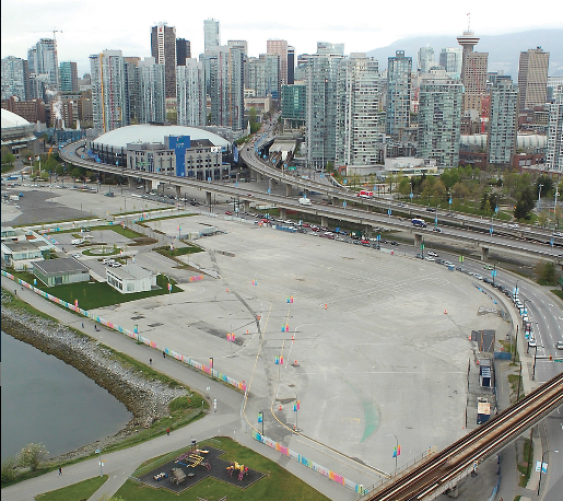 City officials are unable to say when a 13.8-acre park will be built on land adjacent to the Georgia and Dunsmuir viaducts. City staff has recommended the viaducts be demolished and the park be built as part of a renewal project in False Creek. Photo Dan Toulgoet

With less than two weeks before city council decides whether the Georgia and Dunsmuir viaducts should be demolished, city officials are unable to say how much a developer will gain from the removal of the hulking structures or provide a definitive date on when a long-awaited park will be built near Science World.

Those two issues were raised at a news conference Tuesday where officials revealed more details about city staff’s $200-million plan to knock down the viaducts and open up the swath of land under them for a new road network sloping up to Georgia Street, the development of condos, a 13.8-acre park, an elevated bikeway and possibly social housing.

Developer Concord Pacific, which owns the most parcels of land in the area, stands to make more money from removal of the viaducts because it would be allowed to build more condos than if the viaducts remained in place. A staff report to city council in June 2013 suggested demolition of the viaducts would free up 10 acres of land worth up to $110 million.

“There will be an increase [in density] for Concord,” Brian Jackson, the city’s chief planner, told reporters gathered under the viaducts next to Rogers Arena. He said more detail would be included in the staff report that goes before council Oct. 20. “More importantly, what this does is free up density for the city. The city is able to achieve a significant amount of new area for development, which will be going to housing, or can be sold off.”

The city released the staff report Wednesday but it does not provide a clear breakdown of how much density will go to Concord. The report does, however, state that previous agreements between Concord and the provincial government, which sold the lands to Concord, are a factor in future development of the lands.

"Staff will be undertaking extensive negotiations with the landowner and the Province over the coming year related to these matters, and may need to report to council for the appropriate authorities with respect to related transactions," the report said.

Jackson said the city is preparing an amendment to the official development plan for the area and could allow Concord and other developers with land in the neighbourhood to build 2,500 new housing units —with the viaducts gone. Provincial Crown corporation PavCo and the Aquilinis, which own the Vancouver Canucks, also have property in the area. Another 750 to 1,000 units could be freed up on two blocks of city land near Main Street, the likely spot for social housing.

Concord is the same developer that owns a large piece of land that runs from the northern edge of Science World and wraps around False Creek to the Edgewater Casino, near B.C. Place Stadium. Over the years, Concord has leased the land to the Molson Indy, Cirque du Soleil and the Maison du Quebec during the 2010 Winter Olympics.

It is the same property where Concord promised more than 20 years ago to build Creekside Park, which would be an extension of the green space that already exists adjacent to Science World. But the developer has previously told council the property needs to be used as a dumping and sorting site of potentially contaminated soils from other land — that has yet to be developed — before it can proceed with the park.

Though Malcolm Bromley, the general manager of the park board, said the demolition project would speed up construction of the park, neither he nor Jackson could provide a definitive date when the entire 13.8 acres would be built. But Jackson said residents can expect to see small sections of the park and adjoining seawall developed within five years, if council approves the recommendation to demolish the viaducts.

“For all 13.8 acres, we cannot give a date when every single piece of the park will be available,” Jackson told the Courier after the news conference. “But we’re going to be attacking it on an incremental basis, which has never been contemplated before as part of previous agreements. But it’s something Concord is agreeable to.”

Bromley noted in his remarks that one of the first emails he received upon taking the job in 2010 was from the False Creek Residents’ Association, saying his legacy would be measured on the delivery of the park. Fern Jeffries, co-chairperson of the residents’ association, said she was disappointed city officials gave no assurances on a deadline for completion of the park but added she was glad Bromley remembered the email.

“We did welcome him to the city with an opportunity to make history with Creekside Park,” said Jeffries, who attended the news conference. “We’re really pleased that he hasn’t forgotten that and we hope that he will be able to feel good about that.”

If city council approves staff's recommendation, the viaducts could be gone and a new road network built within five years. City officials said revenues and development costs gained in the demolition will make the project cost-neutral. More details can be viewed in the staff report posted today on the city's website.