Quinn Hughes a big boon to Canucks defence, but bottom pairing holding them back

Defencemen paired with young rookie have excelled all season.
Jan 16, 2020 10:12 AM By: Daniel Wagner 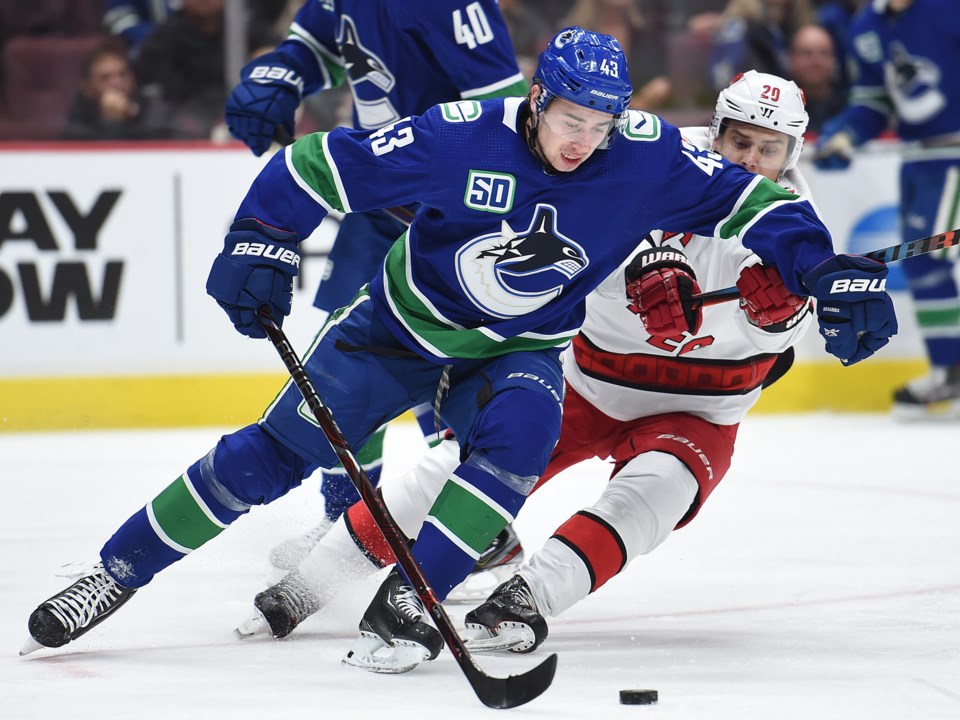 The Canucks have significantly revamped their defence corps over the last year. General manager Jim Benning evidently made a New Year’s resolution for 2019: let go of past mistakes and move forward.

That meant moving on from several defencemen he acquired, like Michael Del Zotto, Erik Gudbranson, and Derrick Pouliot. Gudbranson, in particular, was a big move. The Gudbranson trade with the Florida Panthers was a signature move for Benning, but he stopped throwing good money after bad and instead finagled Tanner Pearson from the Pittsburgh Penguins in exchange for the hulking defenceman.

The Canucks also let Ben Hutton and Luke Schenn go in free agency, then traded Alex Biega to the Detroit Red Wings after he didn’t make the team out of training camp. That’s a lot of turnover, though the Canucks retained long-time veterans Alex Edler and Chris Tanev and 25-year-old Troy Stecher.

Of the four new defenceman, Hughes is undoubtedly the most important. The 20 year old is already the quarterback of the Canucks’ first power play unit, easing the ice-time burden on Edler, and is one of the top-scoring defencemen in the NHL. He’s on-pace to set a new franchise record in scoring from a Canucks defenceman and could even threaten Elias Pettersson’s franchise record in rookie points set last season.

Hughes’ importance to the Canucks is readily apparent on the ice, where his thrilling rushes and dangerous dashes have made him a key component of the Canucks’ offensive attack. Beyond just the offence, however, Hughes is eating up big minutes — he leads all rookies in ice time with over 21 minutes per game — because his coaches know they can trust him defensively.

We can see the impact of Hughes on the Canucks by taking a peek behind the curtain at his underlying numbers. In this case, we’re going to look at Expected Goals, a statistic that aims to find how many goals a team or player “should” score given the quantity and quality of shots they create.

If we look at the Canucks’ defence pairings that have spent at least 20 minutes together at 5-on-5 this season and rank them by Expected Goals Percentage (xGF%), we immediately see a pattern. An xGF% over 50% means the Canucks have out-chanced their opposition with that pairing on the ice — the only three pairings about 50% all have Quinn Hughes on the left side.


After Hughes, there are three pairings with Alex Edler. The Canucks’ franchise record holder for points from a defenceman has been supplanted on the power play by Hughes, but still plays big and difficult minutes. He starts more often in the defensive zone than Hughes and has played less with the Canucks’ top line, so it’s still impressive that his pairings this season are hovering near 50%.

The bottom pairing, on the other hand, has struggled. The signing of Benn in the summer was meant to shore up the bottom pair, but instead, he’s sunk it, significantly dragging down the performance of his defence partners. It’s a far cry from how he performed with the Montreal Canadiens last season, where he was frequently relied upon to play up the lineup and more than held his own.

Benn has been a frequent healthy scratch of late in favour of Fantenberg, who saw some early success when he entered the lineup. Fantenberg is a quieter and safer defenceman, but as he’s played more games, the flaws have started to show. Too often Fantenberg and his defence partner get pinned in their own end of the rink for long stretches and eventually get burned.

The Canucks have had defensive troubles beyond just Benn and Fantenberg, and have been a little too reliant on goaltenders Jacob Markstrom and Thatcher Demko to bail them out of tough jams. The issue is that none of the Canucks’ right side defencemen seem to mesh well with either Benn or Fantenberg, which makes it tough to rely on the bottom pair for regular minutes.

That means turning to Hughes more and more. Fortunately, Hughes has answered every call.

A tap of the stick to Elias Pettersson, Quinn Hughes, and Jacob Markstrom, who will represent the Canucks at the 2020 NHL All-Star Game next weekend. It’s a well-deserved honour for all three.

A big stick-tap to Tyler Motte, who bravely shared his story of dealing with anxiety and depression heading into the Canucks' Hockey Talks game on Thursday against the Arizona Coyotes.

28 - Tanner Pearson had just 6 points in his first 18 games. Since then, however, Pearson leads the Canucks in scoring, with 28 points in 29 games. Pearson is currently on-pace for 59 points, which would crush his career-best 44 points from the 2016-17 season.