Quinn Hughes could still play in a Canucks jersey this season 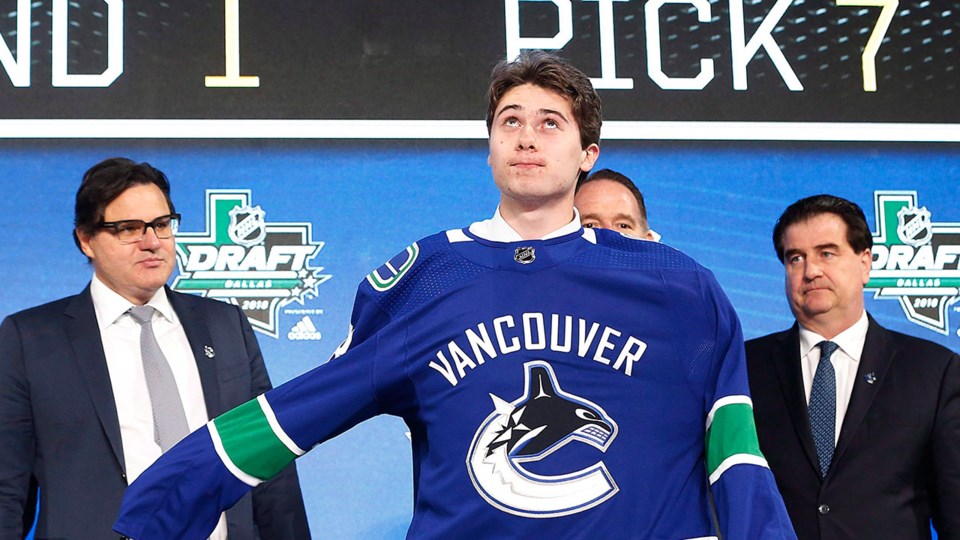 On Saturday, Quinn Hughes and the Canucks announced that the seventh overall pick would head back to the University of Michigan for his sophomore year.

It wasn’t really a surprise, though it’s a blow to the Canucks’ marketing efforts for next season. The addition of Hughes to the Canucks lineup, along with Elias Pettersson and other young players, would have provided an immediate hook for fans to attend games and see the future of the team.

Canucks fans could still get a chance to see Hughes in Vancouver this year, however, just not in October for the start of the season. Instead, he could show up in both January and April.

Hughes will play a key role for Team USA at the 2019 World Junior Championship. USA will be in Group B, which will play their round robin games in Victoria, but Hughes and Team USA will play in Vancouver if they make the semi-finals.

Of course, fans want to see Hughes in a Canucks jersey and not a USA one. That is also a possibility, but things would have to go extraordinarily well for the Canucks or extraordinarily poorly for Michigan.

The 2019 Frozen Four tournament takes place April 11th to 13th, which is after the end of the NHL regular season. In order for Hughes to play for the Canucks, the University of Michigan would have to be eliminated prior to the Frozen Four in the Northeast Regional at the end of March. That would give Hughes the chance to play a few games with the Canucks at the end of the season.

The other possibility? The Canucks make the playoffs and Hughes makes his Canucks debut in the postseason. Let’s be realistic, here: that’s unlikely.

Ultimately, this was the right move. Another year in college gives Hughes a little more time to develop, particularly in the weight room between games, and also gives him an opportunity to dominate the NCAA.

“I was heartbroken when we lost to Notre Dame in the Frozen Four last year,” said Hughes. “I have never really been on a team that cares so much about each other, and I think that’s a big reason why I’m coming back, because I love my teammates.”

That type of loyalty likely appeals to the Canucks on a character level — it’s similar to the commitment seen from Jonathan Dahlen to his Allsvenskan team last year — and it probably made Hughes going back to Michigan an easier pill to swallow.

Hughes going back to college is what’s best for the Canucks as well. The team isn’t all that close to making the playoffs and the addition of Hughes to the blue line would make them better, but not playoffs-better. Instead, his addition would likely just move the Canucks further away from drafting his brother, Jack Hughes, the presumptive first overall pick in 2019.

There was also the issue of how the Canucks would make room for Hughes. Ideally, they would have found a way to move Michael Del Zotto, a veteran with one year left on his contract and little place in the Canucks’ long-term plans. It’s more likely, however, that they would have moved Ben Hutton, a player that could still bounce back and be a part of the Canucks defence corps in the future.

Benning promised to make room for Hughes if he signed, but also suggested that Hughes could start in the AHL with Utica. The last time Benning said he "made room" for a young defenceman, it was Troy Stecher, who started the season in the AHL until injuries opened up a spot on the Canucks. That likely didn't appeal to Hughes.

Whether this was a decision made solely by Hughes, his family, and his adviser, or one made in conjunction with the Canucks, it’s ultimately what is best for both sides.

Hughes’ dad, Jim Hughes, specifically referenced Zach Werenski and Charlie McAvoy when he talked about their decision-making process. The two players are interesting comparables to Hughes.

Like Hughes, Werenski and McAvoy both played in the NCAA in their draft years as 18-year-olds. Both were first-round picks, but went back to college instead of making the immediate jump to the NHL. Both had fantastic post-draft seasons, both in the NCAA and at the World Junior Championship.

Werenski is the most intriguing comparable, both because he also played at the University of Michigan like Hughes, but also because he put up a similar number of points to Hughes in his freshman season. Hughes had 5 goals and 29 points in 37 games, while Werenski had 9 goals and 25 points in 35 games.

Werenski went on to put up a point per game in his sophomore season, with 11 goals and 36 points in 36 games, good for second among NCAA defencemen behind the much older Ethan Prow. That kind of production seems eminently attainable for Hughes, though he’ll have to step up his goal-scoring significantly.

At the 2016 World Junior Championship, Werenski was a beast, leading all defencemen in scoring with 9 points in 7 games. He was named the tournament’s best defenceman as he captained Team USA to the bronze medal.

Hughes will be joined by his younger brother Jack on Team USA and they have a strong chance of winning gold in Hughes’ soon-to-be home.

Hughes and Canucks fans alike would love to see him follow in Werenski’s footsteps in the NHL. Werenski had 47 points in his rookie season, and a solid 16 goals and 37 points last year. That’s the kind of production from the backend that the Canucks desperately need.