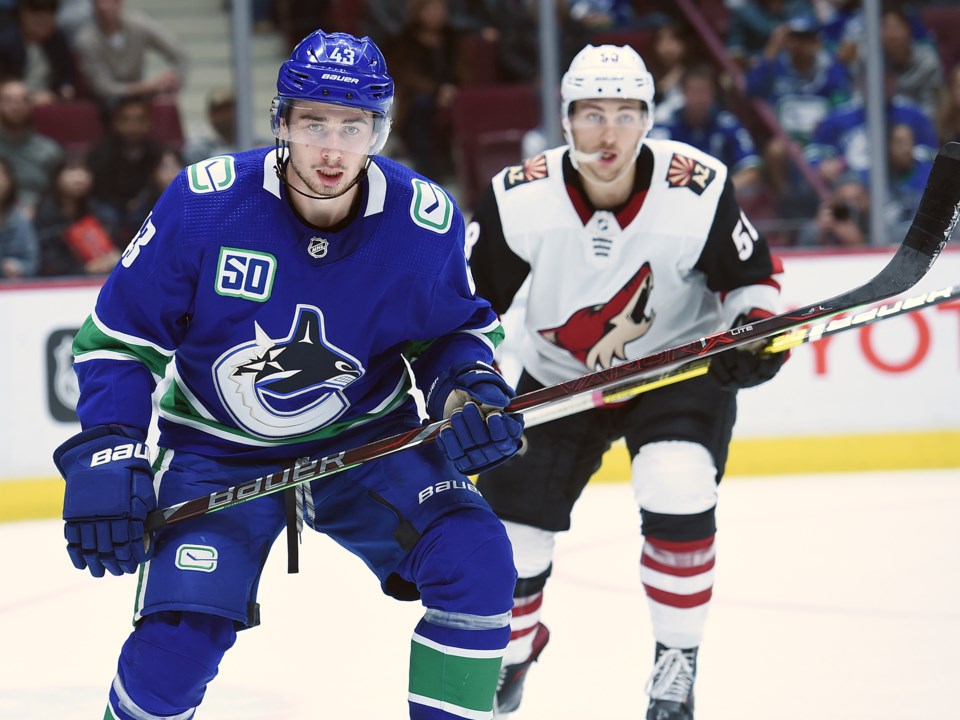 Quinn Hughes captivated Canucks fans at the home opener on Wednesday, scoring the first goal of his NHL career with a rocket of a slap shot.

It wasn’t his only standout moment on offence: he gifted his defence partner Chris Tanev with a goal when the two of them jumped up in a 3-on-2 rush with Brock Boeser. Tanev went to the net with his stick on the ice and Hughes banked the puck off Tanev’s stick into the net with a perfectly-placed pass.

Hughes’ offensive ability has come as advertised: he’s dynamic with the puck, tremendous vision and passing, and has quickly erased any concerns about his shot. So far this season, he’s already broken Adam Larsson’s foot and beat Jonathan Quick cleanly over the glove, so his shot appears to be just fine.

The offence shouldn’t come as a surprise; what is surprising is how quickly the Canucks coaching staff have trusted Hughes in tough matchups against, quite literally, the best forwards in the NHL.

It started right from opening night, when Hughes led the Canucks in ice time at even strength and played a total of 23:07 in all situations. That’s a stunning amount of trust for a 19-year-old defencemen, particularly from a coaching staff that loves to match checking lines and shutdown pairings against the best the opponent has to offer.

What’s more impressive is who Hughes was matched up against: Connor McDavid. More than half of Hughes’ even-strength minutes came against the two-time Art Ross winner and no Canucks defenceman spent more time on the ice against McDavid at even-strength than Hughes. That doesn’t happen by accident.

Sure, McDavid victimized Tanev and Hughes in that game off a turnover by Brandon Sutter, but that’s just what McDavid does, even to the best defencemen in the NHL. And, to Hughes’ credit, he got his stick on the puck and nearly knocked it away to negate the chance.

Against the Calgary Flames, Hughes once again racked up minutes: his 17:45 at even-strength was second only to Tyler Myers. A big chunk of those minutes came against one of the best forwards in the NHL: Johnny Gaudreau. No one played more against Gaudreau at even-strength than Hughes in that game.

The story was slightly different at home against the Los Angeles Kings. Hughes played just 16:25 against the Kings after two games over 20 minutes and was primarily matched up against the second line of Adrian Kempe, Jeff Carter, and Ilya Kovalchuk. That, however, seemed more a reflection of the state of the game. Hughes was on-pace for another 20+ minutes after the first period, but the Canucks were careful to distribute minutes more evenly as they started to run away with the game.

Even with the lower ice time against the Kings, Hughes is still leading all rookies in average time on ice through the first few games of the season, and he’s giving the coaching staff little reason to shelter him from tough opponents or lower those minutes.

“I think he’s played three quality games,” said Canucks head coach Travis Green after practice on Friday. “I thought he was probably as good in the first two games as he was in the last game, just people hadn't seen it live and in person.”

Green seemed to be just as satisfied with Hughes’ play in the defensive zone as he was impressed with the “special things” he’s capable of doing offensively.

“He's a good skater, he's smart, he angles well, takes away time and space with his skating, especially through the neutral zone and on the rush,” said Green. “I think originally, you'd probably be worried that he'd maybe lose some puck battles in our zone, but a lot of times when you're playing against top lines, they're not necessarily the heaviest lines.”

“He's also shown that he can adapt to things,” Green added regarding puck battles, “and I think he's been fine in that area in the three games.”

An example of Hughes adapting to a top player that is heavier came against the Edmonton Oilers on opening night. A pair of plays against Leon Draisaitl showed how Hughes could adjust even in the course of a single game.

On the first play, Hughes tried to lean on Draisaitl with his shoulder, squeezing him off against the boards. It doesn’t work, as Draisaitl uses his left arm to throw the smaller Hughes to the ice.

Hughes didn’t get beat like that again, using his skating, gap control, and stick to divest Draisaitl of the puck instead of trying to make a physical play.

It’s a small example of a larger trend in Hughes’ play worth keeping an eye on: at times Hughes stops skating defensively, which is unusual for a player that skates as well as he does, though less unusual for a rookie. That's what happens on the first play against Draisaitl: he stops moving his feet and tries to lean on the larger forward. The second play, he keeps his feet moving and focuses on using his stick, rather than his body, and makes a better play.

As Hughes adapts to the NHL, he'll learn more and more to lean on the strength of his skating to make defensive plays and you can already see him making those adjustments.

While Hughes has obviously put a lot of work into all areas of his game, the defensive end of the ice has never caused him too much concern.

“I’ve never worried about my defensive game, it’s always been the media questioning my D game,” said Hughes on Friday. “As a 5’10” defenceman, that’s just the thing to do. I’ve always felt comfortable with my D game. For me, I’ve just got to keep playing hard and strong.”

The trust that Green has shown Hughes early in the season, playing him big minutes against tough opponents, has only boosted his confidence.

“It feels really good just to know that they trust me,” he said. “I’ve just got to keep building that trust and keep getting better.”

He’s got no issue going up against the likes of McDavid and Gaudreau in the future.

“There's a lot of good players in the league,” he said, “and you know, it's fun to go up against really good players.”

As he continues to improve game-by-game, it’s going to be less and less fun for opposing players to go up against Hughes.