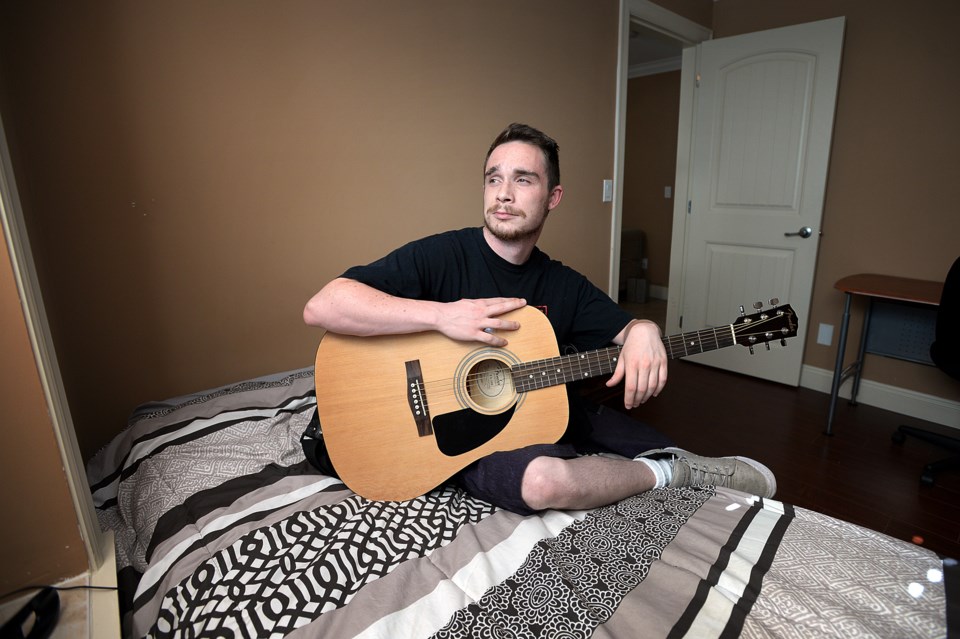 David relaxes in an apartment of his own, which RainCity helped him secure under its LGBTQ2S youth housing project. Photo Jennifer Gauthier

It wasn’t his bisexuality that estranged David from his family but his father’s drug and alcohol problems and David’s own abuse of these substances as a teenager.

“I started living by my own at 16 years old,” the 23-year-old said. “I had some help and support from my grandma at the time, but she unfortunately died when I was 18.”

He lost his job, his relationship ended and he found himself homeless, so David travelled from Montreal to Toronto and then Vancouver.

He stayed at Covenant House and at RainCity HEAT shelters.

He was homeless on and off for six years until RainCity gave him a room in January and then helped him secure a market apartment in April. That was made possible with the help of a rent subsidy from B.C. Housing, under RainCity’s LGBTQ2S youth housing project.

RainCity Housing and Support Society is operating a housing and support program specifically for chronically and episodically homeless lesbian, gay, bisexual, trans, queer and two-spirited youth — the first program of its kind in Canada. RainCity has helped 11 such youth, aged 18 to 24, secure housing.

Research reveals that 25 to 40 per cent of homeless youth in Canada are LGBTQ2S, the identity of approximately 10 per cent of the general population.
David chose to reside on his own while other youth live with more structure in a communal house.

RainCity first helped David with a shelter bed, then with referrals to counselling and drug and alcohol abuse recovery services. He remained homeless until they gave him a room.

“I could go for a date and after that I can go home instead of going into a shelter,” he said of his situation now. “I can go to work because if somebody calls me and wants to give me work tomorrow, I’m able to go to sleep early because I have a home to go back to.”

David collected social assistance when he was living in shelters.

“I swear to you I tried to find work, but when your main address and phone number is a homeless shelter… it’s kind of difficult,” he said.

(Aaron Munro, community development manager for RainCity, requested the Courier not use David’s surname to prevent him from experiencing stigma at work. David didn’t want to share his last name because he didn’t want to hurt his father.)

David has recently worked cutting metal and in warehouses. RainCity has now hired him to be a part-time front desk worker.

While David’s family didn’t judge him for his sexual orientation, he struggled to accept himself, shared little of himself with others and missed opportunities for connection.

“I don’t think it’s as simple as we’re all a cheque away from being homeless,” Munro said. “The more people we have around us, the safer we are in the world. My dream for this project is to build as many connections for these young people — safe, good connections — where they can work through the trauma of having not had housing or not being accepted in their family of origin, so that they’ll never be homeless again.”

The social events have convinced David that people aren’t always judging him. He’s learned to appreciate the struggles that others face with their gender identity.

David is in touch with his family now. His mother visited him in Vancouver to see him and his new apartment. She’s happily remarried and David’s father is in therapy and recovery.

“It was a separation that lasted years but at the end, everybody worked through their own stuff and we all came back to be better with each of ourselves at the end,” he said.