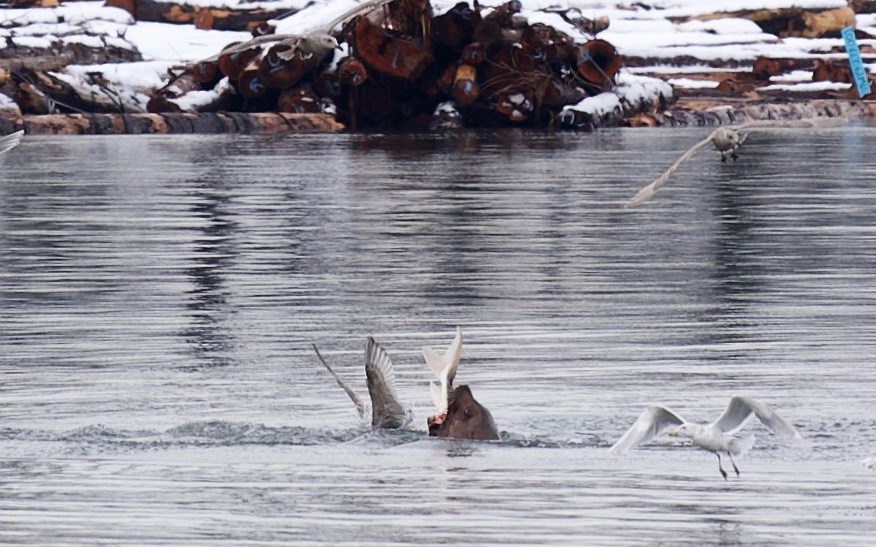 The sea lion chomped the sturgeon in half.Gina Gerl Imaging

Wildlife photography is all about being in the right place at the right time, and this was the case for one Vancouver photographer who managed to capture a rare sight of a sea lion chomping a sturgeon in half for breakfast.

The right place happened to be the back deck of her home, which overlooks the Fraser River near Jellicoe Street in the River District.

Gina, who did not want her last name published, told the Courier she was left “flabbergasted” after snapping the photos.

She said she was looking out from her window at the river about 10am on Saturday, Feb. 16, when she spotted thrashing in the water at quite a distance and ran to grab her camera and a coat off the coffee table.

At first, all she could see was a large black figure rounding in and out of the water at a variety of heights and directions.

Having recently been out taking photos of eagles, Gina’s camera was luckily already set up with a zoom lens (Nikon D750 with a 1.8 70-200mm) and she could start clicking right away.

“By the time I grabbed a coat and camera the scene had calmed down somewhat,” she said.

“I moved closer and through my lens I could see I was watching a sea lion and a large black and white patterned fish.”

Gina estimated the white sturgeon, an endangered fish which is strictly catch and release, was about 4 to 4.5 feet long.

The Department of Fisheries website states the white sturgeon "is the largest and longest lived freshwater fish species in North America, with some individuals reported at over six metres in length and 100 years of age."  The DFO site also says white sturgeon are found only in western North America, and within Canada they are unique to B.C., and are found in the Fraser and Columbia river systems.

Gina watched on and captured the moments of the sea lion biting the sturgeon in two and tossing it into the air like a kitten with a toy.

“I followed and photographed the pair tussling and travelling westward toward Knight Street Bridge for about half a kilometre. By then, there was not much left of the fish,” she said.

After the sea lion was done eating, she said the eagles and seagulls swooped in for the scraps.

“The gulls did manage to scavenge a few morsels, but the eagles flew off hungry,” she said.

Gina said she had lived in the River District for over two decades and had never seen a sea lion in the river, but sometimes noticed large fish jump out of the water.

“I was just looking out the window and I saw something really cool,” she said.

“I’ve lived here for about 23 years and it’s the first time I’ve seen anything like it.”

Having extensively travelled, Gina said she enjoyed the thrill of wildlife photography.

“It’s really exciting. Scenery shots are great, but you just look at them once and there’s nothing to them. These images really get your blood going,” she said.

“It’s very challenging and something like that is so primal and it just reminds us of the cycle of life.”

Gina said the Department of Fisheries and Oceans had shown great interest in her images.

“Department of Fisheries and the scientists are really excited about it,” she said.

“It is more rare than I realized.”

DFO have been contacted for comment. More of Gina's images can be found at Gina Gerl Imaging.

See the images below: