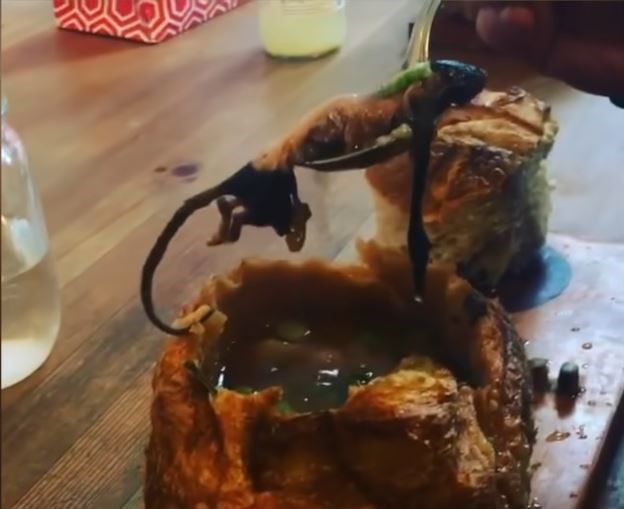 A rat was found in a bowl of soup at a popular Vancouver restaurant.pisun_ne_ne / Instagram

A woman has posted a video of a cooked rat in a bread bowl that she was served at Crab Park Chowdery to her Instagram account.

Since posting the video the restaurant has received an onslaught of calls and messages, and Vancouver Coastal Health is conducting an ongoing investigation. What’s more, a second eatery, Mamie Taylor’s, will be shut down as a result of the incident.

Vancouver Is Awesome spoke to Ashton Phillips, the owner of Crab Park Chowdery, who says he is at a complete loss as to how this happened.

“We’re continually trying to figure out how this transpired. We ensure that everything is clean and we have adhered to food safety measures laid out by Vancouver Coastal Health,” he said.

“She posted the photo at 3 or 4 pm yesterday, but she did so after we gave her a $100 gift certificate. We spoke immediately after she found the creature and it seemed as though we were on amicable terms – since then I haven’t been able to get a hold of her.”

So i am going to talk about this place @crabparkchowdery . Today my friend ordered Manhattan clam chowder and had a little surprise in it - A RAT. Well i don’t know what else to say about it.... this place just need to be closed or at least people have to be aware about this situation. The cafe is kinda popular though... I’m just trying to help people to avoid places like that. Its an awful feeling, it’s not a fly or a bug it’s a fucking big fat rat boiling in the soup pot, which means my friend was not the only who had a chance to try it. Thank you for you attention. #crabparkchowdery I do not force anyone to believe. This is my personal experience that I shared. Thanks for attention again. My main page is @adelaiiine ;)

He also remarked that the cook who was working at the time of the incident is extremely distraught.

“I completely trust her – she’s been here for a year and she’s amazing. Furthermore, the ladle we use to scoop is an eight ounce ladle – that rat was around six inches long and it just doesn’t add up.”

Phillips adds that the negative reaction to the video has been incessant, with people giving one terrible review after another.

Vancouver Is Awesome also spoke with Tiffany Akins, Communications Leader, Vancouver Coastal Health who explained that the soup itself wasn’t made at Crab Park Chowdery.

“The establishment has been closed and will remain closed until it is brought up to standard. Crab Park Chowdery will remain open, however.”

While Crab Park Chowdery will not be able to use Mamie Taylor’s to make their chowders, they do have a food truck that they are permitted to cook in. With that in mind, the restaurant stated that they are currently looking for another commercial kitchen to use.