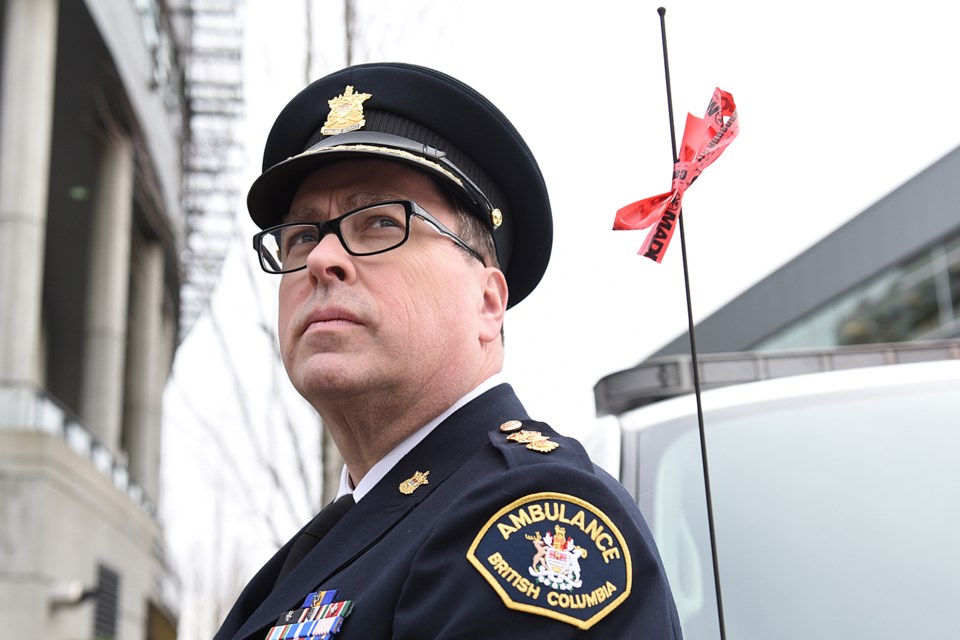 Paul Richards, whose brother was killed in an accident with a drunk driver, ties a red ribbon around the antenna of his vehicle. photo Dan Toulgoet

Thirty years ago, David Richards was driving a bus in Edmonton when he died after being hit by a drunk driver.

His youngest brother, Paul, was 20 at the time.

“An impaired driver slammed into his bus and threw him into traffic and he was subsequently killed,” said Paul Richards, now the area director of B.C. Emergency Health Services. “The wreckage that it causes within families leaves people scarred for the rest of their lives. You’ve lost a loved one and it was totally pointless. There’s no reason why people have to be lost like this.”

The Richards family grew up in the Mackenzie Heights area of Vancouver, where David graduated from Lord Byng secondary school. He was 30 when he died and left behind a wife and two children.

“Until my mother passed away, there wasn’t a day that she didn’t think about him,” said Richards, who shared his story this month as the Metro Vancouver chapter of Mothers Against Drunk Driving launched its annual red ribbon campaign to prevent impaired driving.

It’s the 27th year that MADD is urging people to tie a red ribbon to their vehicles, key chains, purses, briefcases or backpacks to symbolize a person’s commitment to drive safe and sober during the holiday season. The ribbon also serves as a reminder to other motorists to do the same.

Richards joined Police Chief Jim Chu and Mayor Gregor Robertson at a press conference outside the Vancouver Art Gallery where the trio attached red ribbons to a police car and a hearse to show support for the campaign.

Every year, between 1,250 and 1,500 Canadians are killed and close to 64,000 are injured in impaired driving crashes, according to MADD.

“Unfortunately, the realities of impaired driving will turn happy, holiday celebrations with the excitement of family and opening gifts into sadness, sorrow and the closing of a loved-one’s casket,” Khan said. “Please don’t let this be your family.”

The red ribbon campaign coincides with the Vancouver Police Department’s CounterAttack roadblocks set up around the city to catch impaired drivers. On the first night of the VPD’s campaign, Chu said officers conducted 67 roadside tests on motorists and removed nine impaired drivers.

“These are nine drivers that put everyone’s safety at risk by making the choice to drive impaired, either by consuming drugs or alcohol,” said the chief, noting more than 80 people a year die in B.C. in collisions involving an impaired driver.

“More concerning is the fact that several people made the decision to get into a vehicle driven by an impaired driver.”

Added Chu: “You can make the choice at the end of the evening to take a taxi, or go home in a police car, or an ambulance, or even a hearse.”

Over the weekend, 46 drivers in Vancouver received suspensions under the Motor Vehicle Act for deciding to operate a vehicle after consuming alcohol or drugs. Police conducted 237 alcohol screening device tests.

Before Richards became a paramedic, he was an RCMP officer, responding to collisions involving an impaired driver. Such a call, he said, is made more difficult when thinking of what happened to his brother.

“You hope that through campaigns like this that you can appeal to people and have them choose wisely and be responsible when they’re drinking — and not to get behind the wheel of a car,” he said.