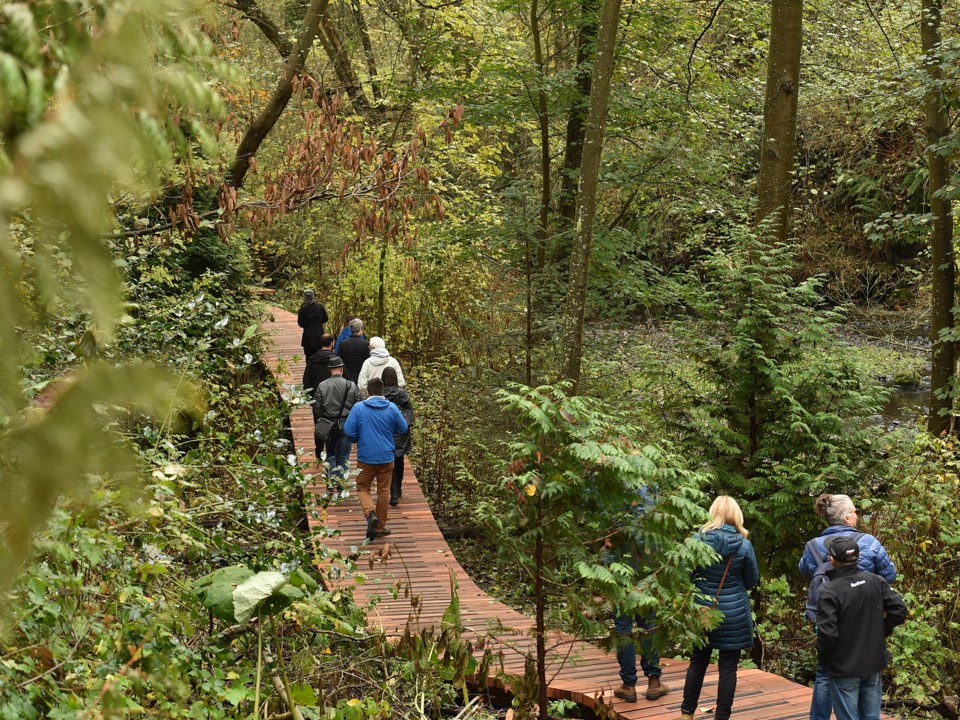 Renovations making Renfrew Ravine Park more accessible to the public include a staircase and an elevated board walk. Photo Dan Toulgoet

One of the city’s hardest to get to parks just got a lot more accessible.

A renovated Renfrew Community Park and Renfrew Ravine Park are open to the public, and more members of the public will now be able to access both parks. The $1-million project includes staircases with better access to trails, enhanced trails and wayfinding, fencing and benches, and two bridges across Still Creek — the longest visible creek in Vancouver.

Still Creek runs through both parks with almost one kilometre, about 65 per cent, still visible. In 2012, spawning salmon returned to the creek for the first time in 80 years.

Renfrew Ravine Park, which was previously only accessible through a space in the trees and a makeshift trail down the steep ravine, now features a staircase and an elevated boardwalk that runs along a portion of the creek.

At the community park, improvements to the trails have made the park more accessible for people in wheelchairs, scooters, or using other mobility aids, or people pushing strollers.

Albert Lee, vice-president of the Renfrew Park Community Association, noted that the improvements not only make the park safer and easier to use, it also means he will now be able to walk the trails with his wife, who uses a wheelchair.

Alex Man-Bourdon, a park board landscape architect, said the vision for revamping the parks started in 2013 with a master planning process that included public engagement and collaboration with local residents, the Renfrew Park Community Association and other community groups like Still Moon Arts Society, which hosts an annual lantern festival in Renfrew Community Park.

Tuesday’s event marking the opening of the renovated parks included class of Grade 2 students from nearby John Norquay elementary school parading into the park on the new trail carrying large lanterns.

The master plan includes a total of about $9 million in upgrades for the two parks, which combined are about 11 hectares in size.

“That is a lot to take on at once, so we phase these things and roll them out in smaller chunks,” Man Bourdon said.

The recent renovations, which also include a new dog park at the community park near Renfrew Street and 22nd Avenue, are just the first phase.

“One of the things that the community identified as being the most important was better access to trails, biodiversity, naturalized areas, as well as the dog park, so those are the phases that we brought on first,” he said.

The project was unanimously approved by park board commissioners back in February.