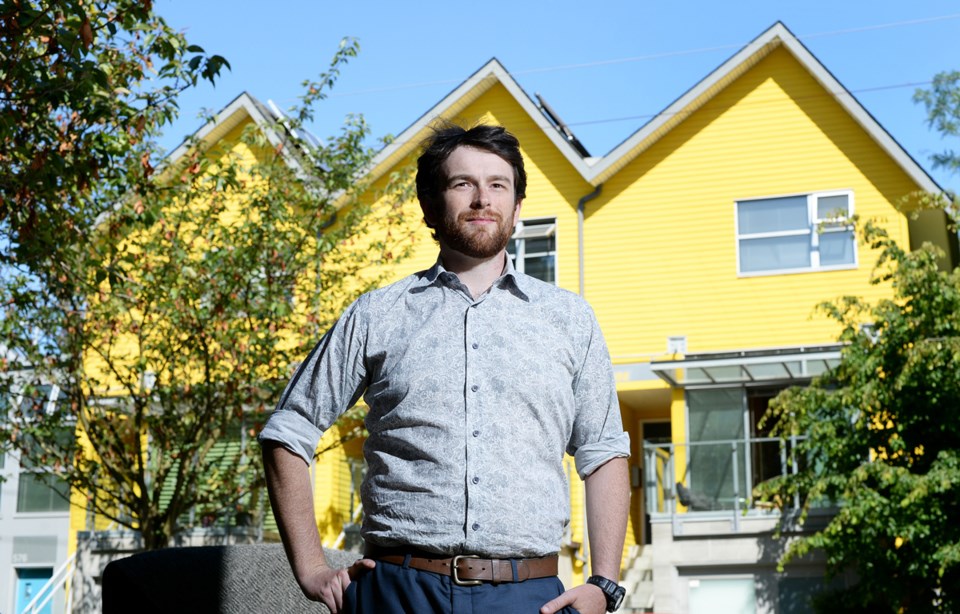 Brendan Dawe of Abundant Housing Vancouver stands in front of a row of townhouses in the Strathcona neighbourhood. The group would like to see more multi-family developments allowed alongside single-family homes. Photo Jennifer Gauthier

Discussing the state of rental housing in the city has become a regular pastime for many Vancouverites, but one group has decided to take that discussion to the people who have the power to do something about it.

Abundant Housing Vancouver started a little more than a year ago. Founding member Brendan Dawe said it all began with several people, mostly renters, commiserating over the lack of affordable rental units in the city. They decided, however, that just talking amongst themselves wasn’t going to do much to change things.

“We said, ‘Why don’t we all show up at the next rezoning meeting,’” Dawe said. “Help bring that sort of presence to bear on city council.”

And that’s what they did.

Today the group has about 20 members and another 1,000 that follow them online.

While Vancouver has a variety of issues around housing, Abundant Housing Vancouver has decided to focus on the rental market, which currently has a 0.7 per cent vacancy rate and rapidly increasing rents.

“The city needs to have more rental housing,” Dawe said. “We aren’t planning for affordability —  it’s not the priority that it needs to be.”

According to the group, under the current regulations, apartments are illegal on 81 per cent of Vancouver land, which severely restricts where those more affordable, multi-family units can be built.

“We do not believe that supply is the whole answer, or the only answer,” the group states on its website. “But we do believe that zoning for expensive, low-density housing is part of the problem.”

Zoning changes would allow the construction of a variety of housing types in more neighbourhoods in the city. Why not put a small, three-storey apartment building on a street with single-family homes? Dawe asks.

This mix of housing types can be seen in some of the city’s older neighbourhoods — Hastings-Sunrise, Mount Pleasant, Commercial Drive — where there are smaller multi-family buildings built alongside single-family homes.

Prior to 1928, the city had no zoning bylaws. That year, American urban planner Harland Bartholomew came to town. He was hired by the Vancouver Town Planning Commission in 1926 to draft the city’s first comprehensive town plan.

Dawe said the plan set out to keep apartments and single family homes separate — using zoning to help keep “undesirables” out of family neighbourhoods. While there have been changes to the city’s zoning regulations, and the reasons for them, the divide between single and multi-family developments remains.

In addition to advocating for more multi-family units in the city, Abundant Housing Vancouver also works to educate and facilitate discussion among residents, hosting walking tours and coffee chats. As well, the group tries to help others have their opinions heard.

“I think they need to stop trying to squeeze everything into the smallest area of the city,” Dawe said.

“We need to plan for affordability, make that a priority.”

Read our interview with the Vancouver Tenants Union here.