Report: Elias Pettersson on Team Sweden’s radar for the 2018 Olympics 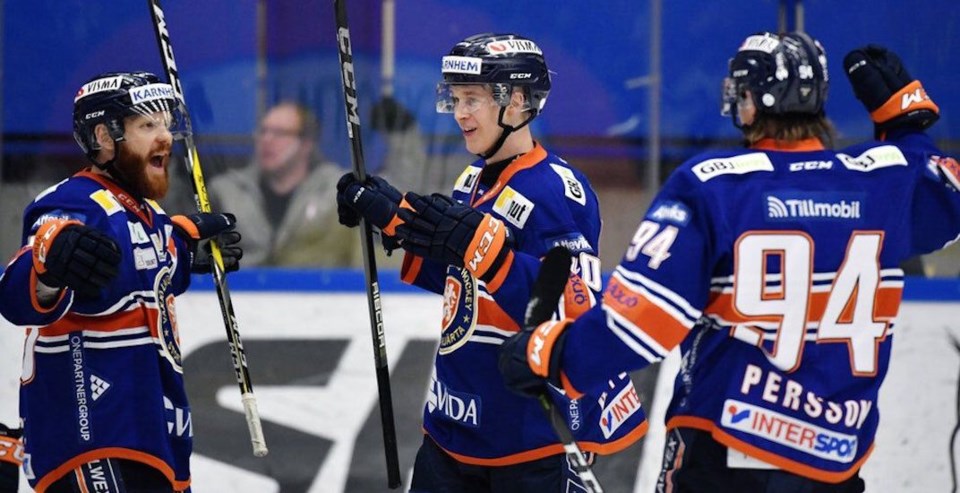 A couple weeks ago, we were talking about Elias Pettersson outperforming the reasonable expectations one might have had for his post-draft season in the Swedish Hockey League. At the time, he had seven points — all assists — in eight games. That in itself was impressive, placing him among the top under-20 players in the SHL in recent memory.

Then Pettersson blew those reasonable expectations right out of the water.

In his four games with the Växjö Lakers since I wrote that article, Pettersson has scored five goals and seven points, including a dominant five-point game on Thursday in which he scored a hattrick. He now has 14 points in 12 games, which leads the Lakers in scoring and places him fifth in SHL scoring.

Pettersson scored in three entirely different ways for his hattrick. He started with a penalty shot goal, where he notably did not go with his “usual” move. Then he blasted a one-timer from the right faceoff circle on the power play. Finally, he ripped a wrist shot top corner at even-strength.

It was a breakout performance for Pettersson, which is remarkable because he was already outproducing every other junior player in the SHL by a wide margin. His performance didn’t just catch the eye of Canucks fans; it also caught the eye of Rikard Grönborg, the head coach of Team Sweden for the 2018 Winter Olympics.

Uffe Bodin, a Swedish hockey writer who covers the SHL, appeared on Sportsnet 650 with Satiar Shah and Jawn Jang and reported that Pettersson is on the radar for Team Sweden.

“Funny thing, actually, the Swedish head coach Rikard Grönborg was at the game last night and saw what Elias Pettersson did,” said Bodin. Grönborg was asked after the game if Pettersson had a chance to make the Olympic roster. “He said definitely, but first and foremost it’s the World Juniors for him in Buffalo right after Christmas. That’s the first step for him, but if he continues to play like this he’s obviously going to be in the conversation.”

NHL players won’t be heading to the Olympics and that includes player who are not currently in the NHL but have an NHL contract. The Canucks chose not to sign Pettersson to an entry-level contract after the draft, perhaps with this exact scenario in mind, so Pettersson is available if Team Sweden comes calling.

“I don’t think anyone ever imagined he would be good this fast in the SHL,” said Bodin. “It’s a faster league, he’s playing against better players, but he’s been exceptional. Last night was just… he dominated every shift he was on the ice. He had two breakaways he missed, so he could have had five goals easily in that game, it was insane.”

“If you look at SHL history, there’s not a lot of junior players at that age that have produced a point per game,” said Bodin. “The only two guys that had a higher pace in their production before Elias — and of course it’s early in the season, so you’re not going to draw any fast conclusions here — but that’s Peter Forsberg and Kent Nilsson, and we all know what they did during their careers.”

Of note, right behind Pettersson in all-time points-per-game from under-20 players in the SHL is none other than Canucks legend Thomas Gradin. Bodin made a comparison to a different Swedish great, however.

“He played with Timra last season, he wears the number 40 on his back, and a certain captain of the Detroit Red Wings has the same history,” said Bodin. “So Henrik Zetterberg is the obvious answer for me. I mean, Zetterberg is such a good two-way player and I think Pettersson is only 18, so he’s not there yet, but from what I’ve seen, the smartness and the on-ice IQ, he has everything that Zetterberg has.”

There are some concerns, however, and they’re the obvious ones when it comes to Pettersson: size and strength. That’s what makes the upcoming World Junior tournament so important for Pettersson: can he continue to play at an elite pace when the games get more intense and more physical? That may ultimately decide if he plays for Team Sweden in the Olympics.

“That’s the only thing I’m concerned about,” said Bodin. “Especially internationally, when the games get more physical, he seems to...I don’t know if he’s intimidated, I think that’s to stretch it a bit, but in games where there’s more physicality, he tends to disappear.”

“I saw this at the World Juniors in Montreal last year,” Bodin continued. “We had high expectations of him, but he couldn’t get it going and I think partly it was the opponents played a pretty physical game against him. Same thing this summer at the World Junior Showcase in Plymouth, Michigan. He kind of disappeared, didn’t have any points in the games he played there. A big, big thing for him and his development going forward is he’s going to need to get stronger and bigger.”

When you see Pettersson in person, his slight frame stands out immediately. He’ll likely never have an incredibly strong upper body, but if he can develop his core and legs in the same way the Sedins have, then he’ll be a lot harder to push off the puck. Combine that with his skill and he could be a dynamic franchise centre for the Canucks.

“He has all the skills,” said Bodin. “The things he does with the puck, the way he thinks the game, how fast he reacts out there, I think it’s safe to say that he has elite talent.”