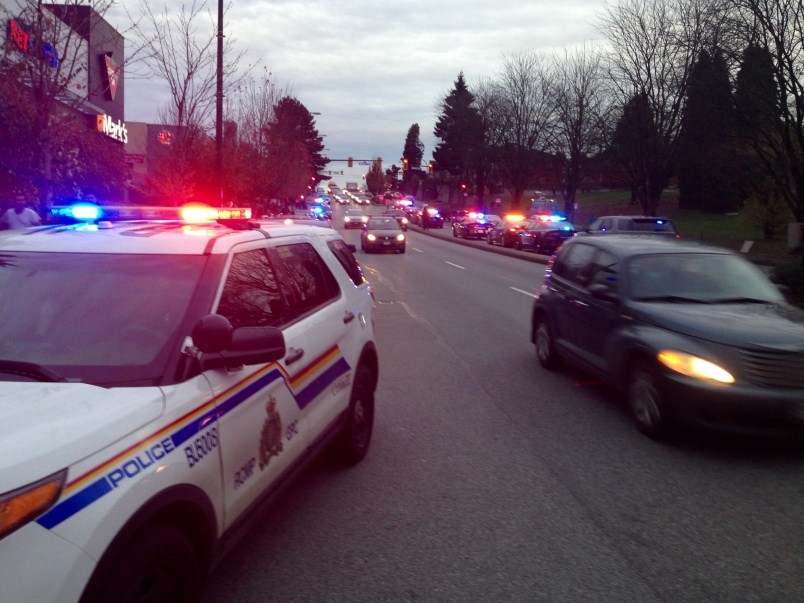 Dozens of police officers from Vancouver and the RCMP rushed to a Canadian Tire store on Grandview Highway Nov. 10, 2016 to respond to reports of a man robbing the store. Police killed the man outside the store’s front door. Photo Mike Howell

The Independent Investigations Office has cleared Vancouver police officers of any wrongdoing in the November 2016 shooting death of a 430-pound man who stabbed a police officer and a store clerk while attempting to steal a rifle at a Canadian Tire store on Grandview Highway.

The agency released its decision Feb. 1 and the report reveals a chaotic scene in which officers struggled to subdue Daniel Peter Rintoul after he emerged from the store armed with a knife and a large can of bear spray on the afternoon of Nov. 10, 2016.

Rintoul, who was 38 at the time of his death, isn’t identified by name in the report. But the BC Coroners Service confirmed four days after the shooting that Rintoul was the man shot by police outside the Canadian Tire on Grandview Highway, near Renfrew Street.

Three officers—identified only as officers 1, 2 and 4 in the report—fired 10 bullets from their pistols at Rintoul, with nine of the rounds hitting him. Rintoul was also hit twice with a Taser, five “rubber bullet” rounds from an Arwen gun and pepper spray. He died at the scene.

“The objective evidence demonstrates that [the man] posed a threat of deadly force to members of the public, who may have been in the store and possibly coming out, and to the lives of the officers present who later gave statements regarding their individual threat assessments,” said the report signed by Chief Civilian Director Ronald J. MacDonald and lawyer Clinton J. Sadlemyer of the investigations office.

“All of that evidence supports the reasonableness and necessity of the decisions by officers 1, 2 and 4 to shoot. Officers 1, 2 and 4 acted as required by their duties and in accordance with the law. The evidence collected does not provide grounds to consider any charges against any officer.”

The force used by police occurred outside the store. Inside, Rintoul had already sprayed mace at a 53-year-old store clerk at the “gun desk” and cut his face and head with a knife. The store’s video surveillance showed Rintoul “breaking open the glass gun case and trying to load a long gun,” the report said.

‘Just do what I say’

He left the desk without a gun but was carrying a can of bear mace. A customer in the store said he saw the man coming down an escalator. He told investigators “the next thing, he had his arm around me and he showed me his knife [and] said…’Just do what I say, and you won’t get hurt.’”

Store video shows the customer being guided by Rintoul, who was holding a knife on the customer’s shoulder. On the day of the incident, which began just after 3 p.m., Vancouver police issued a news release saying an 82-year-old customer had been taken hostage.

The report doesn’t give the customer’s age, but said he was left unharmed by Rintoul moments before he left the store to be met by officers 1 and 2, one of whom was armed with a rifle (which investigators learned later wasn’t loaded).

The officers identified themselves as police, told Rintoul to “go down” and that if he had a weapon, he should “drop it.” Rintoul started to spray the officers with mace as officer 2 fired his Taser at him. He “went down,” the report said.

Witness accounts, including one from a person who kicked Rintoul in an attempt to help with the arrest, said officers got on top of Rintoul but were unable to handcuff him. One witness questioned, “How can anybody be that strong?” The same witness said it looked like Rintoul was trying to get away.

“The video makes it clear that [the man] could not be controlled, likely because of his size,” the report said. “It appeared as though the few body blows the police were using to control him had no effect at all. The [man] took hold of officer 1 and started stabbing his face and shoulder. Officer 1 pushed [the police] rifle away slightly with his foot and [the man] rolled on top of him. As officer 1 struggled to get free from [the man’s] grasp, he stabbed his stomach.”

The officer then rolled away, stood up and unholstered his pistol. So did his partner. Both officers fired shots at Rintoul until he went down. Officer 1 “staggered slightly and fell to his knees.” Seconds later, he collapsed onto his back, the report said.

At this point, Rintoul began repeatedly shouting “finish me off” as officer 2 continued to point his pistol at him. Between them, the officers had already fired seven shots at Rintoul. More officers arrived on the scene, with one spraying a small canister of pepper spray at Rintoul.

Rintoul was still yelling to police to “finish me” and spraying bear mace at officers. He started to roll his body towards the line of officers and it appeared he was attempting to stand up, the report said. While this was happening, two officers took hold of officer 1’s arms and dragged him several metres from Rintoul, “leaving a trail of blood.”

An officer--identified as officer 4 in the report--fired another round from a pistol at Rintoul. Another officer fired three rounds from an Arwen gun. Rintoul continued to spray bear mace at the officers. Officer 4 fired two more shots at Rintoul, whose “left leg came over his right leg and he was fully face down and motionless.”

An officer then used his Taser on Rintoul and put him in handcuffs. He died at the scene.

The Courier attempted to reach Rintoul’s mother in Calgary to comment on the report’s conclusions, but she did not return a call before this story was posted. Vancouver police declined to release the status of officer 1, who was stabbed in the incident until a later date.

The report noted the completion of the investigation was delayed because of court action that related to “a difference of opinion that arose between the VPD witness officers and the IIO.” The main issue was over an interpretation of a clause in the Police Act, which mandates that a witness officer must fully cooperate with an IIO investigation.

“The officers’ position was that they should be entitled, among other things, to review third party video of the incident prior to being required to give a statement,” the report said. “The IIO took the position that it was up to an investigative body, in this case the IIO, to determine when video would be shown to a witness, if at all.”

The IIO commenced court action to require witness officers to give statements without conditions. In October 2018, a B.C. Supreme Court decision ruled in the IIO’s favour and ordered seven officers to attend for interviews with investigators.

The report, however, notes officers 2 and 4—who were two of the officers who shot Rintoul with their pistols—declined to provide “statements, notes, reports or data, as in their right.” A memorandum of understanding between the IIO and B.C. police agencies, and consistent with the Canadian Charter of Rights and Freedoms, states that officers who are subject of an investigation are not compelled to provide a statement.

A total of 68 civilian witnesses were interviewed in the case.