A grey whale enjoyed a swim in False Creek between the Granville and Burrard bridges in 2010. Last year, a beaver in Olympic Village took a nap in the sun and herring spawned around Habitat Island.
Jul 31, 2014 11:53 AM By: Christopher Cheung 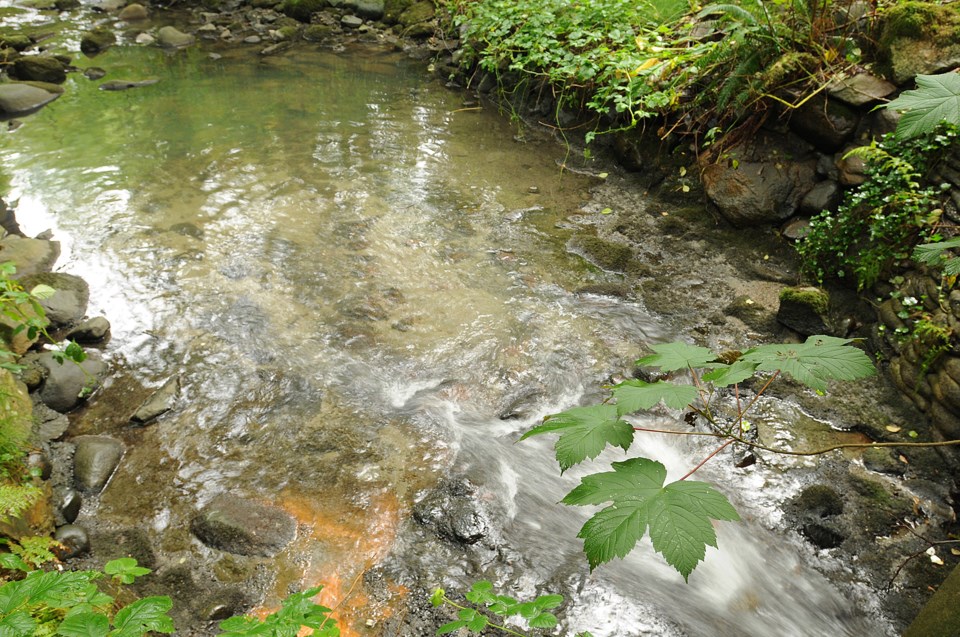 The Renfrew Ravine is one of 28 biodiversity hot spots identified in the "Rewilding Vancouver" plan due to the old, diverse forests alongside the ravine. Photo Dan Toulgoet

A grey whale enjoyed a swim in False Creek between the Granville and Burrard bridges in 2010. Last year, a beaver in Olympic Village took a nap in the sun and herring spawned around Habitat Island. Park board efforts to develop a greener city have been in motion and the board now turns to educating Vancouverites to better engage with the green spaces around them.

The “Rewilding Vancouver” plan was approved unanimously July 21. Contributors include members of the Environmental Education and Stewardship Task Force, a combined effort of park board members with educators and environmental workers in the city.

The plan’s 49 actions focus on working with partner organizations and non-profits over the next five years to develop a catalogue of available community resources and information on 28 identified biodiversity spots in the city that should be maintained and protected. The main goal is to encourage ecological literacy.

Some partnerships mentioned in the plan are community centres, Vancouver Public Library, the school board and post-secondary institutions. The plan also calls for more volunteering opportunities, youth programs, workshops and guest speakers.

Patricia Thomson, executive director of the Stanley Park Ecological Society and a task force member, stressed the importance of the city connecting with community groups. “City resources have arborists and horticulturalists, but they don’t have educators and such,” said Thomson. “We are engagers… All these need to fit together hand and glove and the dream is to build a broader support network.”

Joseph Lin is also a task force member and the president of Green Club, a non-profit started in 1999 to educate the public on conservation and biodiversity with a special focus on Asian immigrants. The club organizes free walks to highlight nature in the city with different seasonal routes.

“For lots of new immigrants or new Canadians who just came in recent years, or in the near future, they might not know about [these issues],” said Lin, an environmentalist from Taiwan and retired family doctor. “So that’s why we need those two components emphasized in the report. One is stewardship, but the other is environmental education.”

Park board commissioner Niki Sharma shared her dream for the city in the plan’s report: “This work is ultimately inspired by the resiliency and beauty of the natural world that finds spaces to thrive even in the harshest urban environments. We believe that every Vancouver resident should be able to witness the magic of seeing salmon in their local stream, whales in the harbour, and eagles above them.”

When asked about individuals skeptical about such a grand vision for Vancouver, Thomson noted the importance of connections.

“They just need to clue into a group,” said Thomson. “We [Stanley Park Ecological Society] have been doing the work to restore and enhance Beaver Creek and by this time next year, that creek… will be stronger yet in a position to receive adult salmon.”

Lin hopes Vancouverites will see themselves as residents of a natural habitat.

“They need to understand before people came here, what [the area] looked like.”