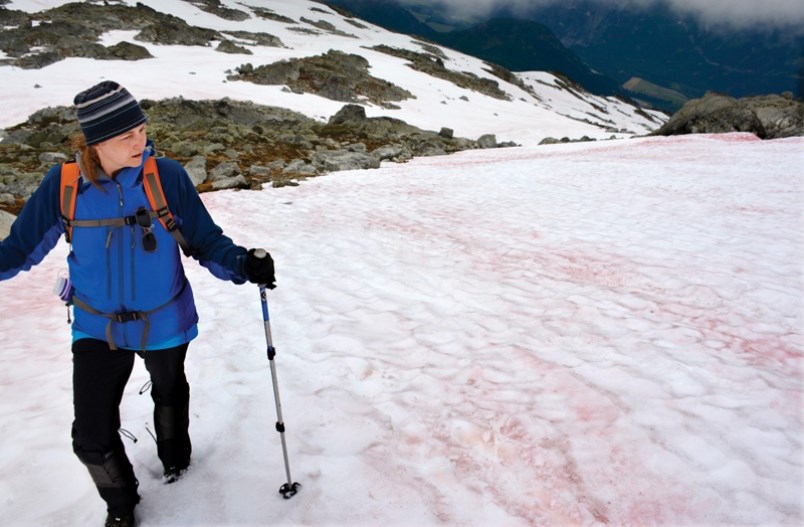 Slashes of pink, red and yellow mark the untouched snow like Arctic graffiti.

At least half a dozen species of candy-coloured algae are in the North Shore mountains, swimming, dividing and spreading in what appear to be dramatically increasing numbers, according to molecular biologist Lynne Quarmby.

“It’s one of the positive feedback loops of climate change,” she said, speaking from her lab at Simon Fraser University.

As red algae divides and stretches, the snow doesn’t reflect light, it absorbs it.

In the Arctic, that absorption has resulted in a dramatic increase of melting ice, according to a 2016 study conducted primarily by scientists from the University of Leeds in England.

In 2016, Quarmby and a team of citizen scientists tried to remedy that ignorance by collecting algae from Hollyburn Mountain, Goat Ridge and West Lion, as well as other B.C. mountains.

While Quarmby and a handful of undergraduate students managed to cultivate a few species in her lab, the work is still in its formative stage. “I don’t even have a grant to fund the work yet,” Quarmby said.

While the algae can be relied on to bloom each spring, scientists are uncertain if it’s deposited by wind or snow, or if it swims to the surface.

There’s also uncertainty around how the unicellular organisms spread. In a temperate region, the algae population can increase 16-fold in a day.

“Some of these guys have really cool cell division processes that we don’t understand at all yet,” Quarmby said.

Quarmby is hoping the Natural Sciences and Engineering Research Council of Canada will fund her work with about $30,000 a year for the next five years.

The money could mean a stipend for some graduate students as well as access to “very expensive” genetic sequencing that could help determine how the red algae forms.

“Maybe way down the road we can have some sort of an impact,” said Vista Namdarian, an undergraduate student working with Quarmby.

The algae’s role in raising atmospheric temperatures was enough to make Namdarin volunteer in the lab.

“It could have the same effect in our local regions,” she said. “It’s important to explore that potential.”

The work on the algae in the snow is exciting because it’s “something that no one’s ever done before,” said Namdarin.

“On the one hand we don’t have any of the tools, we don’t know how to study these guys,” she said. “On the other hand, everything we discover is new.”

The algae is truly revealed under the microscope, according to Quarmby. Scientists can study life cycles, differentiate species, and determine how algae survives an environment that appears to offer cold temperatures and little else.

Quarmby said the impetus for her work is concern and curiosity.

“Some of the greatest discoveries through human history have come unexpectedly through curiosity-driven research,” she said.

Quarmby previously delved into the parallels between people and pond scum, with surprising results.

“It’s not a keystone species… it doesn’t have any importance per se, but its importance is that it’s life, and all life is related.”

Because humans and pond scum share an ancestor, Quarmby’s lab was able to extrapolate the genetic causes of polycystic kidney disease.

However, Quarmby is clear that her investigation of the North Shore’s neon snowbanks is also rooted in the 2009 United Nations Climate Conference.

More than 100 world leaders gathered to discuss climate change in Copenhagen, Denmark. The conference ended with a non-binding agreement to “take note of” an accord that failed to include a specific target for emission reductions.

“It hit me like a punch in the gut that our governments were not going to step up,” Quarmby said. “Because I’m a biologist and really feel a deep connection to nature, I see the importance of the big environmental issues because I know how ultimate that is in terms of human well-being.”

The former Green Party candidate rejects the notion that her activism somehow detracts from her scientific research.

“Science is in crisis right now and part of it is our neo-liberal politics, but part of it is a lack of activism on the part of scientists,” she said. “We’re citizens, too. We need to have a political voice, we need to let people know why what we’re doing matters.”