A team from the Vancouver Aquarium helped rescue two sea lions entangled in plastic pollution in the water off Vancouver Island.
Mar 21, 2018 9:54 AM By: Courier Staff 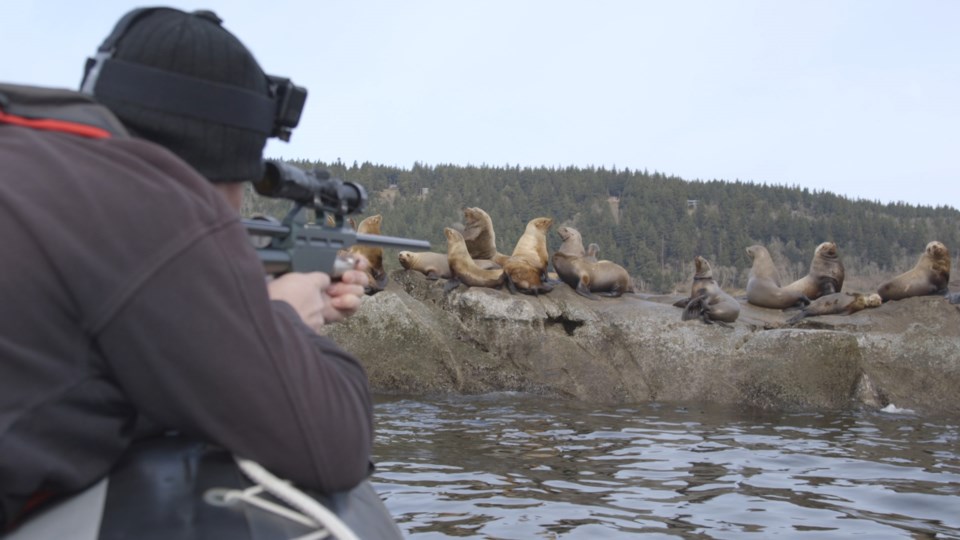 A team from the Vancouver Aquarium helped rescue two sea lions entangled in plastic pollution in the water off Vancouver Island.

Over the weekend a team from Vancouver Aquarium’s Marine Mammal Rescue Centre was called in to save a Steller sea lion near Fanny Bay from a nylon rope that was cutting deeply into her neck. The team was able to temporarily immobilize the sea lion shooting it with a dart containing a sedative. Once the sea lion was sedated, the team, which included support from Fisheries and Oceans Canada (DFO), was able to cut her free.

The team attempted to rescue a second young Steller that was entangled in a plastic packing strap, but the animal bit out the dart carrying the sedative before the drugs could immobilize it before bolting into the ocean.

“We’re happy we were able to save the female,” said Dr. Martin Haulena, head veterinarian at the aquarium. “The rope was cutting in quite deeply and she was suffering badly and would eventually have died.

“Of course, we would like to have had two successful rescues today, or more than two — we know there are hundreds of animal entangled in trash and plastic on our coast, and unfortunately we just can’t get to them all.”

Haulena is the only professionally trained veterinarian in the country able to disentangle sea lions from marine debris. Over the last 20 years, he has helped develop a precise drug combination to temporarily immobilize a sea lion so it can be carefully handled.

The procedure often takes place in the water with the team working on a floating animal from a boat, and requires specialized equipment, expert staff and boat support from DFO. Just one rescue costs about $2,000, including staff, gear and immobilization drugs.

“The problem of plastic pollution in our oceans is becoming a crisis, and it’s one that we all need to take more seriously in our daily lives,” Haulena said. “From debris that causes entanglement of entanglement of marine mammals like these, to smaller plastics that get ingested by fish and animals at the bottom of the food chain, our single-use plastic waste is having a huge impact.”

The nylon rope will be analyzed at the Ocean Wise Ocean Pollution Research lab so researchers can determine exactly what kind of plastic it’s made from. The team hopes to begin identifying sources of marine debris that entangles aquatic animals and encourage the public, industry and government to reduce plastic use.

Last week, Ocean Wise launched its #BePlasticAware pledge campaign, which aims to raise awareness about ocean plastic and build collective action by asking people to reduce their plastic waste from single-use items and other sources. Pledge participants receive monthly lifestyle challenge to help reduce the use of single-use plastic over the course of a year.