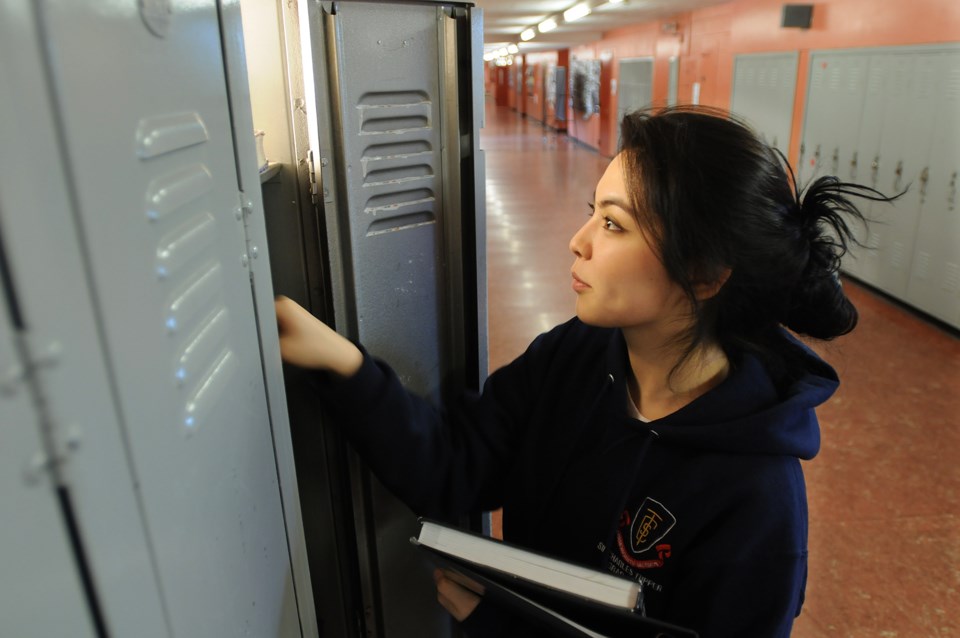 Somaya Amiri: “Whatever I did at school or in the community it was just because I loved it. And just getting recognized for that was, for me, a huge honour.” Photo Dan Toulgoet

Sir Charles Tupper secondary student Somaya Amiri has accomplished something only 30 Canadian teens this year can boast. She’s been named a Loran Scholar and will receive up to $100,000 over four years to attend university.

Just over three years ago, Amiri couldn’t speak English beyond “hi” and “bye.” She also couldn’t write English script — in Afghanistan she wrote in Dari right to left — and she recalls leaving her Vancouver School Board district placement test blank.

The lack of language skills left Amiri feeling “super nervous” to start her first day of Grade 9 at Tupper in December 2011. But her excitement to attend school superseded any anxiety.

“Coming to school, having my notebook, writing stuff down, holding the pencil, little things, it was so joyful,” the 17-year-old told the Courier Tuesday afternoon.

Amiri had stopped dreaming she’d be able to attend school when she lived in Afghanistan.

Her family had lived far from the closest school in Behsood and she said getting there “was kind of unsafe.”

Her older brother attended school, but she learned to read and write at a mosque.

“A lot of girls can’t even go to the mosque and can’t even read and write,” Amiri said. “So I was really fortunate for that.”

Fed up one day, Amiri slid a pencil in her pocket, slipped out the door and followed her brother to school, only to encounter her furious father there.

“He takes her home in disgrace,” Burnell said. “But then when she gets home, her mom and other female members of the family are all crying, and she just doesn’t really get it. And then they point out to her that they thought that she might die on the road because she’s a female trying to get education…

There were people around, the Taliban and others, who did not believe in a woman’s education and who would certainly have harmed anyone who had the audacity to do that.”

Amiri’s family are Hazara, the least populous of the four main ethnic groups in Afghanistan, and Shia, whereas most of the Muslims in Afghanistan are Sunni. She says they are members of the minority that faces ethnic cleansing.

Amiri’s family sold everything and joined her uncle in Pakistan when the situation became intolerable. Life there wasn’t any safer, so Amiri’s father decided they should relocate to Canada.

The family arrived as refugees under perilous conditions.

They lived at Kinbrace community housing for refugees near Commercial Drive. Britannia was the closest school but school board staff suggested Amiri attend Tupper, on East 24th Avenue near Fraser Street, which provides extra supports to newcomers.

“She actually got the award for top scholar the first year she was in mainstream,” Burnell said.

“She was so anxious to learn and she was absolutely ravenous for more,” said ELL teacher Sally Ringdahl. “A lot of students who haven’t had formal education find it pretty overwhelming, and no matter how much of any sort of topic or experience or activity, she wanted more.”

Amiri explains her hunger this way: “When you want something, and it’s so hard to have it, it becomes more precious to you.”

She memorized 40 new words each morning before school.

“I would go to school and I just felt so confident and I was going to use all these words. Some of the words weren’t even useful because it was, like, a picture dictionary and then there was like toys and stuff, like babysitting vocabulary,” she said with a laugh.

Amiri was the first at homework club and the last to leave. To practise her fledgling English speaking skills, Amiri participated in the VSB’s Engaged Immigrant Youth Program, or EIYP, socializing with other newcomers and getting connected to the community.

When Amiri felt English language learners needed even more time and space to practise their speaking skills, she and another student, with the help of EIYP program coordinator Jennifer Reddy, wrote a grant proposal to the Vancouver Foundation and secured their first $5,000 for a weekly club.

“Three of the students that joined the program at the beginning are now taking the leadership to lead the club,” she said.

“One of the stuff that we did was having a penny drive for clean water in India,” she said. “Helping building a school, that was our theme last year. It was just like stuff I could really connect to.”

With encouragement from Burnell, Amiri learned to express her ideas clearly on a school debating club. She recently joined the Vancouver Foundation’s youth advisory team.

The teen has accomplished all of this while commuting to Tupper from Surrey and now New Westminster. A stint at a school in Burnaby lasted only three weeks.

“I’m pretty sure I wouldn’t be able to be where I was today without having the support of [Tupper] and the community that I have,” she said.

Amiri learned about the Loran Scholars Foundation through her own research. She was one of 3,800 applicants and one of 76 semi-finalists selected for their character, commitment to service and leadership potential. She passed a local selection process and Loran flew her to Toronto earlier this month for interviews.

When Amiri saw other students being vetted, she figured she had no chance.

“They’ve been, like, doing amazing sports, know how to play different types of instruments,” she said.

But she learned Feb. 8 she had been selected.

“Three-and-a-half years ago, I didn’t know how to speak English,” Amiri said. “And whatever I did at school or in the community it was just because I loved it. And just getting recognized for that was, for me, a huge honour.”

She shook her head side to side and widened her eyes when asked what her winning the scholarship meant to her parents.

“It means so much for them. It wasn’t easy for them to bring us here… There was pain and hardships coming, but then at the end, it was worth it,” she said.

Amiri’s interest is science and medical school, but her passion is for humanitarianism, so she’d like to combine the two.

“Not all Afghan girls or girls in developing countries get opportunities that I got… I’ve lived two such different lives… I just want to use that,” she said. “It’s not fair how geography plays so much of a role in how much you’re exposed to opportunities.”