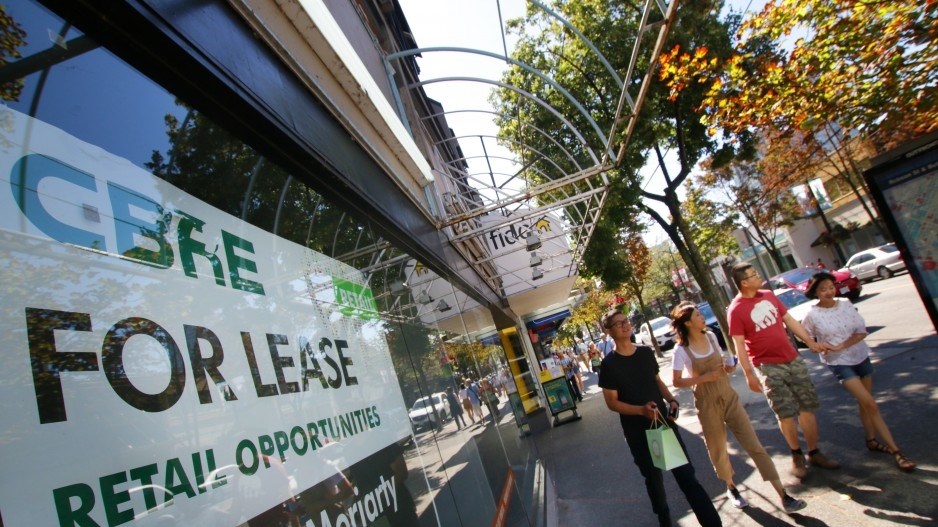 Empty storefronts in the 1100 block of Robson Street, where average rents are the second-highest in the city. Photo Rob Kruyt

Empty storefronts pockmarking Vancouver strolls such as Robson Street, Denman Street and south Main Street are the result of a mix of higher rents and taxes, development pressures and storeowners following their customers to the suburbs, analysts say. Small retailers are the most affected.

Craig Patterson, editor of Retail Insider, who has been consulting with the City of Vancouver on the issue, pointed to the 1100 block of Robson, parts of Denman Street and the Punjabi market area around Main Street and East 49th Avenue as retail areas that are struggling.

“Certain areas of Vancouver are hollowing out,” Patterson said.

On Denman and Robson, he suggested it is due to higher rents, some of which is tied to rezoning potential.

“Some landlords don’t want to lower [retail] rents because it reduces the value of their building,” he said. “They would rather leave [storefronts] empty.”

Retail lease rates on Robson Street range from $120 to $250 per square foot, the second highest in the city behind Alberni Street, according to a recent survey by Cushman & Wakefield.

B.C. Assessments values a commercial building for its best use, which means that a retail site that is re-zoned for higher-density development could see a substantial increase in its assessed value, with the subsequent tax increase often passed on to the retail tenant. Vancouver businesses pay 4.87 times the residential tax rate – the highest multiple in Canada — according to Altus Group and Real Property Association of Canada.

On south Main Street, the increasing number of vacancies is due to retailers following their customers to Surrey and other parts of the Fraser Valley, Patterson said. However, he noted some Vancouver retail strips are booming, including West Fourth Avenue, South Granville and Commercial Drive.

Commercial real estate agencies suggest the current vacancies being seen in Vancouver retail could be a localized, short-term cycle. They note that Metro Vancouver retail spending in May reached $3.4 billion, up 5.4 per cent from May of 2017 — the second-highest annual increase among major Canadian cities. Vancouver’s retail vacancy rate is 1.7 per cent and it is 2.5 per cent in the downtown area, both among the lowest in the country.

“Despite all the doom and gloom surrounding mid-level retail stores closing, both high-end and low-end retail, as well as food-service locations, continue to perform well,” noted Andrea Wellburn, manager of information and research for Cushman & Wakefield in Vancouver.