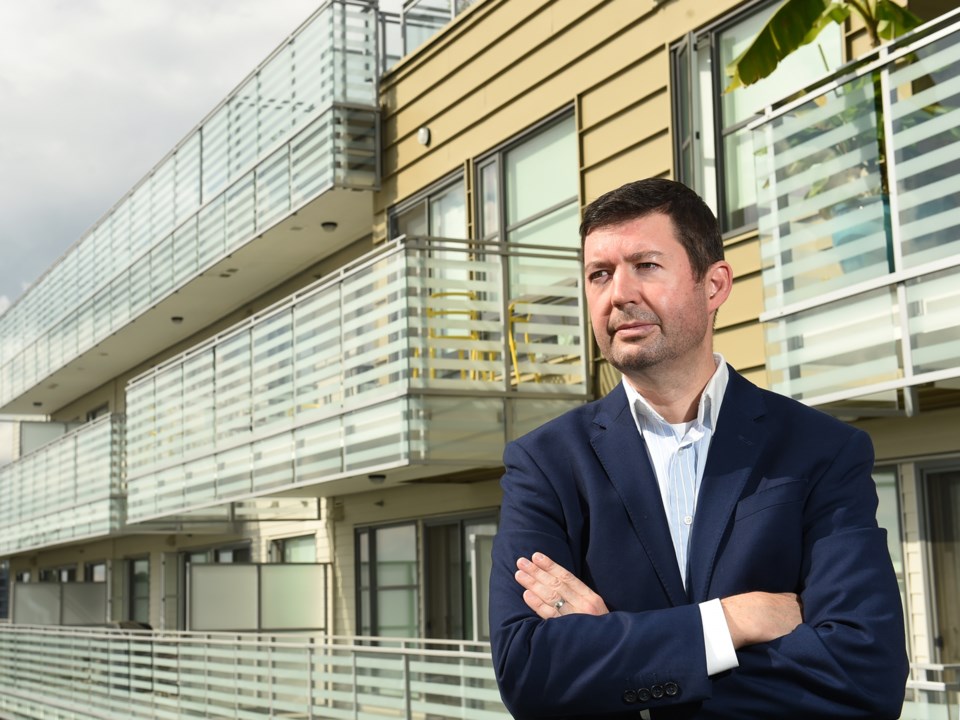 Todd Skene on his balcony, about 20 feet away from where a risqué photoshoot was seen by his four-year-old son.Dan Toulgoet

Todd Skene hadn’t planned on having the birds and the bees talk with his four-year-old son.

Two women wearing next to nothing were bumping and grinding on an apartment balcony 20 feet from his son’s window.

“It’s nothing you can prove, but even just the nuisance of seeing what was going on on the balcony where they were humping chairs, getting into sexual poses and doing lap dances and all that — you knew what was going to be going down,” Skene said.

The photo shoot was a symptom of a much larger problem for Skene and his neighbours in southeast Vancouver. They suggest their condo complex in the River District is rife with illegal short-term rentals that consistently skirt the city’s bylaws.

And due to the short-term nature of those stays, parties, smoking, noise at all hours and drug use are allowed to happen with little recourse, says Skene.

“It’s all great for the people staying there, it’s not good for us,” Skene said. “For the most part, it’s been fairly quiet. But sometimes, there’s no control. You get these yahoos in there and you don’t know what they’re going to do.”

Leigh Parker lives next to the suite in question along with his wife. He’s a bit more forgiving than Skene and usually waits for the wafts of pot smoke or loud parties to subside. That’s in large part due to the fact he doesn’t have kids.

Parker didn’t see Saturday’s incident, but another neighbour did. Parker has since seen the photos Skene took of the photo shoot.

“That’s way beyond the line,” Parker said. “It’s not fair. I agreed with him there.”

The city’s bylaws around short-term rentals require a business licence and proof that rentals take place in a permanent residence. Those rentals cannot exceed 30 consecutive days, and non-compliance can result in fines of up to $1,000 a pop. Short-term rentals are only permitted in secondary homes or basements suites if the operator lives there full time.

That’s where Skene and Parker get agitated.

Their complex opened in August 2018 and they’ve since seen the owners of the suite three times.

Parker spoke with the owners last year and was told they live on one of the Gulf Islands. He suggested one of the owners is a realtor and therefore knew that bylaws were being broken.

“They told us, ‘Oh yeah, we’ll be using it on the weekends or for business when we’re over,’ but they’re not,” Parker said. “They had this plan right from the beginning.”

The Airbnb listing for the apartment was removed by Wednesday morning. Prior to it being removed, it was listed as a rooftop setting, ideal for an artsy couple. User reviews were uniformly positive from travellers across the Pacific Northwest. The suite was listed for $299 per night.

Airbnb spokesperson Lindsey Scully said the suite owners had a business licence. A city staff member told the Courier the suite is under investigation.

“Airbnb takes reports of violations of our Community Standards very seriously and will investigate complaints shared with us through our neighbour tool,” Scully said in a prepared statement issued to the Courier.

Scully said Airbnb is the lone short-term rental company working with the city to provide information that can be cross-referenced for investigations, such as business licences and addresses.

Skene suggests that short-term rental loopholes are happening across the city, particularly in newer developments with new strata councils.

His council’s annual general meeting happens in late October, at which point Skene is hopeful the strata will adopt financial penalties designed to punish those who operate outside the city’s bylaws. His neighbour agrees.

“It’s a new strata and they’re still getting their feet underneath them,” Parker said. “My argument and Todd’s argument is that the city should be doing more.”

Residents can report concerns about short-term rentals by calling 311, via the VanConnect app or online HERE.

A link to Airbnb’s community standards is HERE along with the company’s cancellation policy.