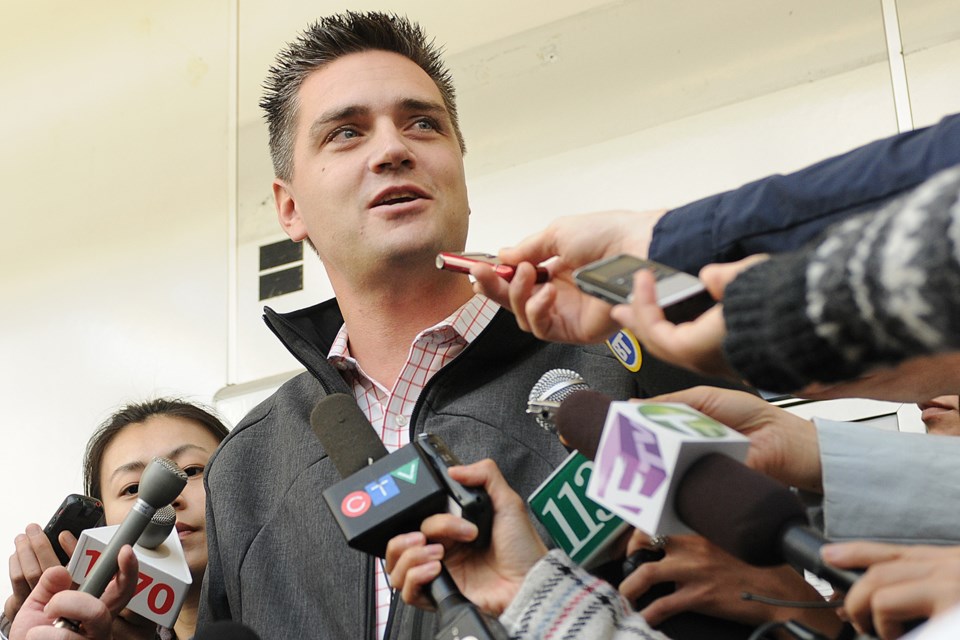 Transportation Minister Todd Stone announced Thursday that he is willing to extend the transportation referendum no later than June 30, 2015. It is slated for this November. Photo Dan Toulgoet

Transportation Minister Todd Stone announced Thursday that he is willing to delay a referendum asking Metro Vancouver residents how and whether to fund major transit expansion projects.

The referendum, originally slated for November, would take place no later than June 30, 2015, said Stone, who also announced his government will introduce legislation to give the region’s mayors “approval powers” over TransLink’s 30-year strategy and 10-year investment plan.

The minister announced the significant developments at a press conference at B.C. government offices at Canada Place and in a letter to North Vancouver district mayor Richard Walton, who is the chairperson of the mayors’ council on regional transportation.

“To ensure sufficient time is available for in-depth public discussion, this extension [of the referendum] depends on the mayors’ council articulating and presenting a regional vision, with specific priorities and costs,” Stone wrote in his letter to Walton.

Stone said that “vision” or plan has to be ready by June 30, 2014 or else the provincial government will look to tying the referendum to municipal elections in 2017.

“The ball will be firmly in the court of the mayors’ council now,” Stone told reporters.

Depending on what unfolds over the next few months, Stone said a referendum could still go ahead in conjunction with this November’s municipal elections.

He warned a delay in holding a referendum — whether it be next year or in 2017 — would mean the mayors’ council would have to rely on existing funding sources to expand transit in the interim period.

Any new funding sources, Stone said, must be generated within the region and not be subsidized by taxpayers in the rest of the province. Also, the government will not permit new funding to be collected from the provincial transportation system.

Stone said government is prepared to pay for one-third of major new rapid transit projects and the replacement of the Pattullo Bridge, which links New Westminster to Surrey.

In June 2013, the mayors’ council announced it wouldn’t support a referendum, predicting it would fail and jeopardize transit projects. The mayors’ council, which includes Mayor Gregor Robertson, noted the replacement of the Port Mann Bridge and other major road projects did not require a referendum.

"While I have always stated that I do not support a transit referendum, if it does proceed it's crucial that it be held at a time when citizens, businesses, mayors and hopefully the province can all focus on making the clear economic and quality of life case for urgently needed transit improvements," Robertson said.

“I don’t think anyone feels it’s the way to make these kinds of decisions,” said Meggs by telephone as he left a forum at Simon Fraser University on transit and the referendum. “It’s not what’s being used to build the Massey Bridge or the Port Mann Bridge or any number of projects.”

Though a delay in holding the referendum gives mayors more time to formulate a funding plan, Meggs believes the mayors will be reluctant “to be handed this bushel of hot potatoes and told to make the best of it.”

Added Meggs: “It’s going to be very interesting to see how all these pieces come together, or don’t. It’s a complicated business and it doesn’t seem to be getting any simpler.”

Robertson has lobbied for a subway — estimated to cost $2.8 billion — to be built between the Commercial Drive/Broadway hub to the University of B.C. Surrey mayor Dianne Watts wants a $1.8 billion light rail system.

The Courier left a message Thursday for Walton, the chairperson of the mayors’ council, but he had not returned a call before deadline.

Ian Jarvis, the CEO of TransLink, told the Courier last fall the transit agency has “adequate resources to provide the level of service that’s there today. What we don’t have is money for expansion.”

Stone is to meet with the mayors’ council Feb. 14.