When Google announced its release of the Google Glass invention, techno geeks and consumers around the world let out an eager cheer for the computer device you wear like a pair of glasses. Paul Mohapel, however, felt his heart sink. Oh, no, he said.
Aug 8, 2013 9:00 PM By: Vancouver Courier Staff 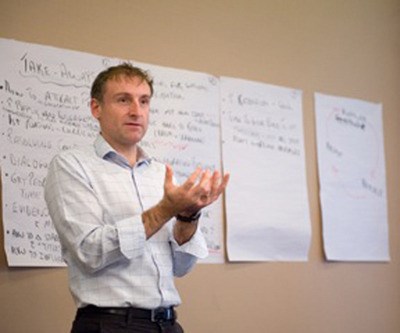 When Google announced its release of the Google Glass invention, techno geeks and consumers around the world let out an eager cheer for the computer device you wear like a pair of glasses. Paul Mohapel, however, felt his heart sink. Oh, no, he said. Could it really be coming to this?

Mohapel, a neuroscientist-turned-psychologist and associate faculty member in Royal Roads Universitys Leadership program, has a special interest in technology; specifically, the impact its use has on the human brain. He thinks all these modern conveniences are, quite literally, easing our brains to mush.

What weve finally discovered is that spending time with technology is causing us to live in a stress state, Mohapel says. The brain cant help itself were constantly scanning our environment for something new, consciously or unconsciously, even when we are not in front of our computers, because weve trained ourselves to live in a perpetual state of distraction.

It might have crept up on you: that overwhelming feeling you get from the volume of daily emails, your trouble concentrating for sustained periods of time, that tick you develop when you spend long periods away from your screens, or how you cant hold a conversation without wondering whose text you just missed.

In the 2013 world, its a little unrealistic to expect people to shut down their Facebook accounts, turn in their passwords to Twitter, and minus Google+ from their lives. But when it comes to the grey-matter impact of spending so many hours on a computer, TV, tablet, or smart phone, Mohapel says were not even having that conversation. The message has been the more you do, the more important and valuable you are, but the truth is that no one is more effective when they multitask. All the research shows it lowers your effectivity by about 50 per cent and businesses are starting to notice.

The Information Overload Research Group (IORG) is a non-profit organization that aims to reduce information pollution and was funded by technology groups in North America when the likes of Intel and other IT companies discovered their employees were beginning to show extreme symptoms of distractibility. In fact, employees had trouble spending more than 11 minutes concentrating on any one task. With what the American Medical Association has strived to term Internet Addiction Disorder (IAD), researchers noticed that people who spent more than 40 hours per week with technology (besides regular workflow) exhibited severe symptoms of dependence, much the way an addict of any substance would: inability to focus, attention-deficit traits, a need to return to the source, irritability, exacerbation of pre-existing conditions like depression or anxiety.

According to a 2008 study by Basex Research Group (hired by IORG), information overload results in the loss of 25 per cent of a workers day.

There was a time when computers were at home and we could at least control our exposure, but if you think of all the time we spend on our iPhones and iPads, that 40 hours is probably gone in a blink, says Mohapel. Imagine what an alcoholic might go through, and the alcoholic is now surrounded by alcohol everywhere he goes.

Part of the problem, Mohapel says, is due to a primal part of our brains that is hard-wired to want stimuli. What many dont realize, however, is that just like nutrition, stimuli comes in high-quality and low-quality forms. Reading a paper book, for example, exercises an entirely different part of the brain (and offers that high-quality stimuli) than reading an e-book on a Kindle, which gives low-quality.

Another techno twist: research has discovered the brain releases pleasure reward chemicals, like dopamine, every time an email or text message bing is heard, adding a true physiological addiction to the substance. And, when study subjects were asked to complete a task while their email was pulled up on the screen, researchers found those subjects IQ went down 10 points, even when no emails arrived. Conversely, subjects who had ingested marijuana and then performed the task lost just four IQ points.

The irony is that while all this technology is supposed to be making us smarter, it is literally making us stupider, Mohapel says

So, whats to be done? For containing the impact technology has on your life, he suggests a mandatory four-hour chunk of quiet time per week, with no technology invited. Some of Mohapels co-workers even have Technical Sabbath Sundays. Next, set limits: check your email/Facebook at designated times during the day, then stay off. For sustaining mental functionality, Mohapel says naps help a 20- or 30-minute power nap can repair brain structure. Also, meditation and mindfulness techniques have been proven to have a significant impact on brain function, giving the brain something present to reflect on, instead of zoning out. Finally, fresh air, a walk and nature are all rescuing sources.