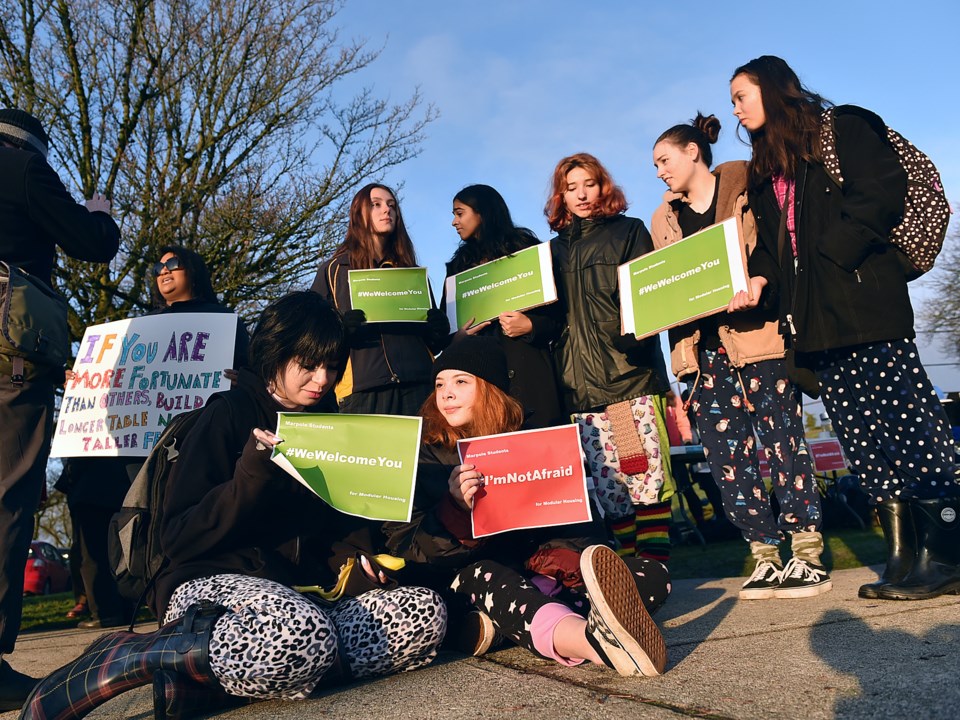 Students from Churchill secondary school held a rally Tuesday to support those who will moving into a Marpole modular housing complex. Photo Dan Toulgoet

A day after the Supreme Court of B.C. granted an injunction against those protesting a Marpole housing project, students from a nearby high school held a Dec. 5 rally in support of those who will eventually live there.

Last week, protesters vowed to stand in the way of the 78 temporary housing units in Marpole until they got a hearing with the City of Vancouver. They were not at the site Tuesday morning after the city was successful in court in stopping their protests, which blocked construction.

On Tuesday morning, north of the proposed site, at 57th Avenue and Heather Street, a growing crowd of roughly 70 supporters, including 30 students from nearby Sir Winston Churchill secondary, held signs in support of the project.

Ishman Bhuiyan, a Churchill student and member of Marpole Students for Modular Housing, said the rally was not about competing against the other protesters, but bringing the Marpole community together and welcoming homeless people. He said the safety concerns voiced by the project’s opponents with respect to the housing units’ close proximity to three schools does not resonate with him and his peers.

“We are not concerned at all,” Bhuiyan said. “All this project does is, it brings a positive sense of change in our community and it’s actually helping people that are outside today that don’t have a home.”

Helen Colliander, a Grade 12 student at Churchill, said that though the supportive crowd may not represent all of the voices at her school, welcoming the homeless into the community is a chance for collective growth.

“Integration is the best way to diminish fear in our community,” Colliander said, while holding a “Marpole Welcomes You” sign. “Having these people around daily and interacting with them and seeing everything that they can contribute, and the wonderful things that they can share as well, I think that will help diminish the fear.”

Though the event was peaceful, a liaison officer from the Vancouver Police Department was present, as were two police cruisers. Half a block south of the high school on Heather Street, a security guard patrolled the area where opponents of the project had been camping out in the week since the city approved it.

In a Tuesday press release, the city said the injunction was filed “to prevent protesters from blocking access to the site and stopping construction from beginning on this urgently needed housing project,” adding that the protests at the site have pushed back the completion date of the housing units.

Paul Mochrie, deputy city manager with the City of Vancouver, said although the protests are legitimate, the way in which they were conducted gave the city no choice but to involve the courts in order to start construction. He hopes the opponents will adhere to the injunction without the involvement of police.

“If there are individuals who are acting in a manner contrary to court order, our first step would be to advise them about it,” Mochrie said. “Beyond that, it becomes an enforcement issue of the Vancouver Police Department.’

In an emailed statement to the Courier, Luo Binshun, spokesperson for the Caring Citizens of Vancouver Society, said they are disappointed with the city’s legal steps and request a sit-down with the mayor to “find a quick and reasonable solution.”

“We are disappointed that Mayor Gregor Robertson and Vision Vancouver are using bullying tactics such as an injunction on a peaceful protest that is requesting for a public hearing and consultation,” the statement said. “This is yet another example of reckless and hasty decision making by Mayor Robertson to bypass democratic rights of Vancouverites.”

The temporary modular housing units in Marpole are the second such project. A pilot was launched on Main Street and Terminal Avenue early this year. The city has also decided on a location for the next modular housing project near the 29th Avenue SkyTrain station at 4410 Kaslo St. Ultimately, the city wants to build 600 units throughout Vancouver at a cost of $66 million.