Sixty students and supporters marched through the University of B.C. campus last Friday night to launch a six-month long campaign that will include YouTube and research projects in response to a spate of sexual assaults on female students.
Nov 26, 2013 11:37 AM By: Jennifer Thuncher 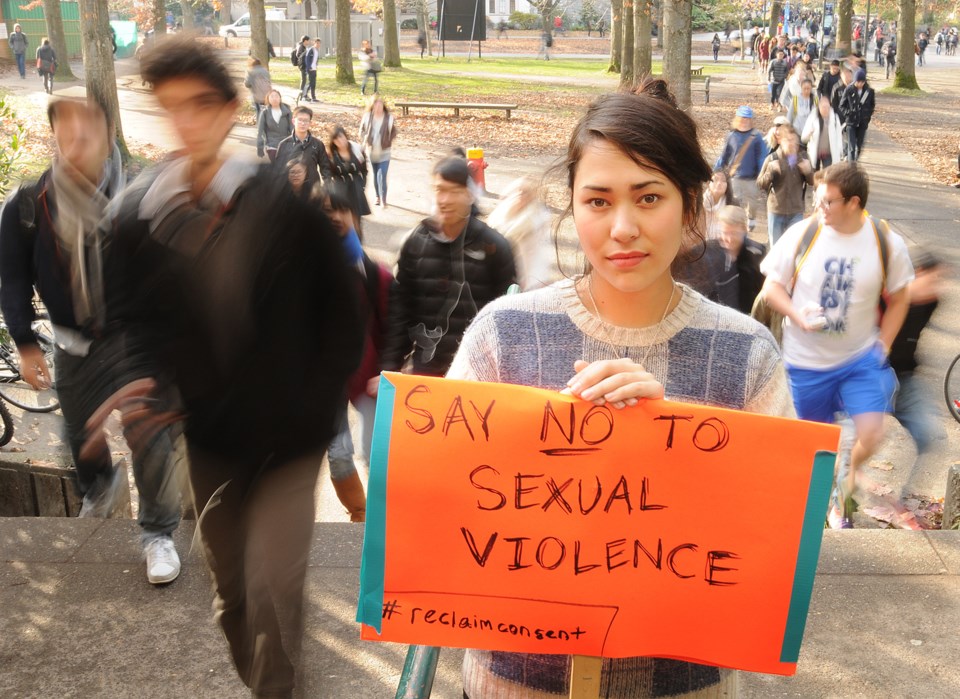 Sixty students and supporters marched through the University of B.C. campus last Friday night to launch a six-month long campaign that will include YouTube and research projects in response to a spate of sexual assaults on female students.

The Campaign to Reclaim Consent, a feminist education and advocacy initiative, was sparked by sexual assaults of at least four female students walking at night on campus and on the way the school. Police responded to the attacks by warning women to walk in groups.

Campaign organizer Laura Fukumoto, a fourth year theatre student, said these attacks and other incidents at UBC, such as the Sauder Business school chant that glorified rape, did not occur in a vacuum but instead reflect cultural attitudes.

“You should be able to walk alone at night… What is the root of these issues?” she said.

Fukumoto hopes the march and planned future events, including, educational YouTube videos, a documentary and research project highlighting past feminist activism on campus, will be part of a wider conversation about gender politics.

“We want to be really mindful of including all the voices which are the quietest,” she said.

Friday’s marchers, a mix of mostly young men and women, chanted, “Hey-hey, ho-ho sexual violence has got to go,” and waved placards that read “Smash Patriarchy” and “Silence Is Not Consent.”

As the march wound its way past student residences someone on a balcony yelled “Shut up.” In reply, the group shouted back in unison, “No!”

Arno Rosenfeld, 19, attended the march and described it as a powerful experience. As features editor for the student paper The Ubyssey, Rosenfeld stirred up controversy earlier this month when a column he wrote criticized a campus Take Back the Night, Women Against Violence Against Women rally attended by many of the same people who organized the march.

In his column he objected to the ideological purity of the organizers and the link made by others between the assaults and colonialism, a wide brush he argued turned off people new to the debate.

“I wanted to see some more effective advocacy,” he said.

Rosenfeld said Friday’s march was more organized and the points effectively made. He wished more of UBC’s nearly 50,000 students had taken part, he said.

The march ended with poetry readings and speeches in front of the campus Goddess of Democracy statue.

Natalie Clark, an instructor in the faculty of social work, spoke of a 12-year-old girl she worked with as a trauma counsellor who had been sexually assaulted and described the assault as her first sexual experience.

“I said to her, that is your first experience of violence on your body, and I hope it is the only one, but it is not your first sexual experience. Rape, sexual assault are not about sex, experience or consent,” she said.

“There needs to be spaces where you can talk about these things.”

Twenty-three year old creative writing student Kyla Jamieson read an open letter to her younger brother about the importance of getting a woman’s consent for any sexual activity.

“Things like … how if a girl doesn’t say no, how it can still be rape,” she said.