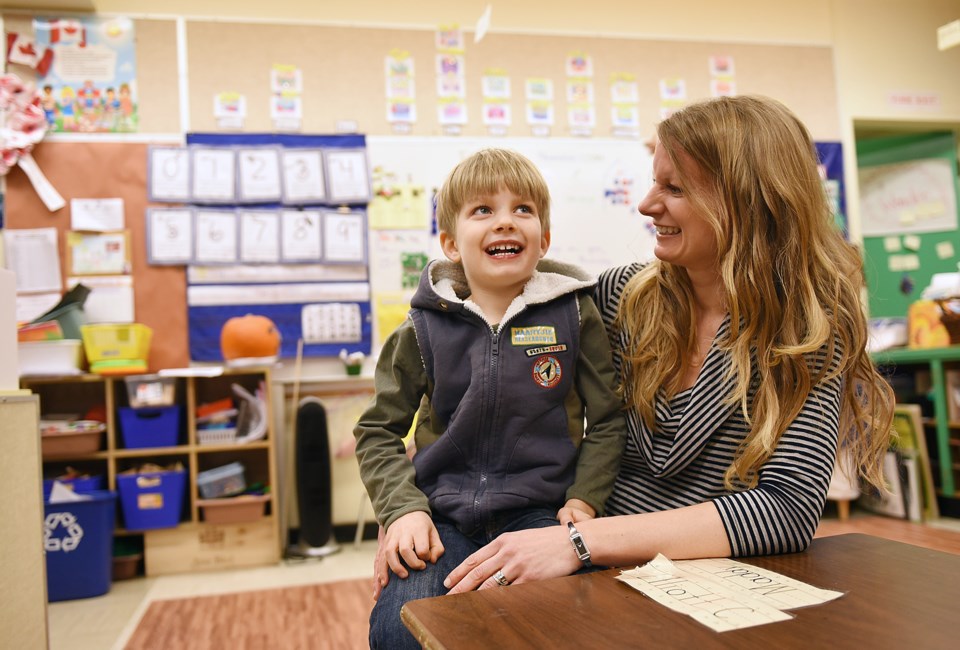 Rachel Pettman hopes her four-year-old son Ryan will be able to attend the oversubscribed Simon Fraser elementary in September. He attends the preschool next door. Photo Dan Toulgoet

He lives nine blocks away and attends preschool next door.

“The whole reason I chose the preschool where I did for Ryan was that he would make friends, he could build relationships in our neighbourhood and he would have friends to go to school with,” Pettman said.

But the school at West 15th Avenue and Columbia saw 88 applications for kindergarten before the end of January last year and only had space for 46.

“And then a third of those were given to the siblings,” Pettman heard.

Pettman submitted an application for Ryan at Simon Fraser as soon as registration opened earlier this month.

Pettman said she and her husband would send Ryan to Wolfe. But district principal David Nelson says Wolfe is too full to accommodate out-of-catchment kids this year.

The Pettmans are considering applying in January for Ryan to attend French immersion.

“Neither my husband nor I have past Grade 10 French so that wouldn’t be particularly ideal for us,” Pettman said.

She is less enthusiastic about Nightingale and Mount Pleasant.

“I just have heard through different teachers in the community that the resources aren’t the same and it’s further from our house,” Pettman said.

The family includes a two-year-old with another child on the way and Pettman wonders whether the siblings will be attend the same school as their brother.

Nelson explained in-catchment kids with a sibling already at a school are placed first. The remainder are drawn randomly and assigned a number on a waitlist and contacted as spaces become available.

The school board approved two portables at Simon Fraser elementary last spring, but most families stuck to the choices they’d already made by then.

Nelson says full schools and the board are monitoring the number of applications they receive by Jan. 30. The board is working on an enrolment management strategy. Challenges and options are being and will be further communicated to parents.

The board is working with a company on long-term enrolment projections until 2028. Nelson said projections point to an excess of 600 students in the catchment that includes Simon Fraser by 2028. The construction of an elementary school near the former Olympic Village would be a long-term solution to the problem.

“It’s certainly an option that the district will have to look at going forward as we see these areas of growth and our pockets where we’re seeing increased density,” Nelson said. “The problem is [the pockets of density] are all together.”

The last major catchment review occurred in 2000, with adjustments to the Grandview-Woodland effective next September.

Simon Fraser is one of 16 schools and annexes that are full or nearly full. Most of the schools are in South False Creek, downtown, Yaletown and border the Cambie corridor.