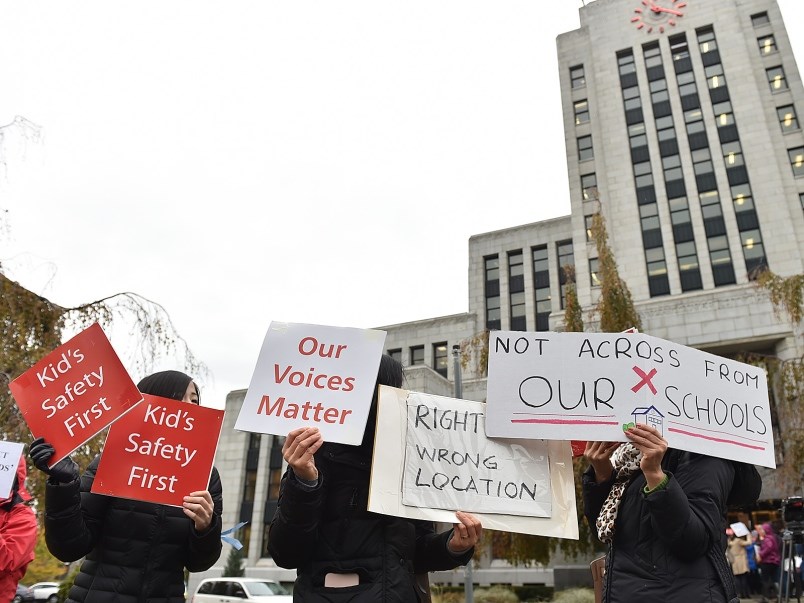 Some Marpole residents held a demonstration outside Vancouver city hall in November 2017 protesting the plans to put a modular housing complex for the homeless in their neighbourhood. Photo Dan Toulgoet

The Supreme Court of Canada has quashed the Caring Citizens of Vancouver Society's bid to launch a final appeal of the construction of temporary modular housing in Marpole.

Opponents of the Marpole complex, which opened at 7430 and 7460 Heather St. in early 2018, have argued it’s too close to a school, there wasn’t enough consultation and there are safety concerns.

The society challenged the development process the City of Vancouver followed to permit the buildings through both the B.C. Supreme Court and the B.C. Court of Appeal, but those cases were dismissed. Then, in May of 2018, the City of Vancouver received notice of the society’s intent to seek leave to appeal the case through the Supreme Court of Canada.

Before an appeal is heard, the person or group wishing to bring the appeal must ask the court in writing for leave, or permission, to do so.

The Supreme Court of Canada posted its decision dismissing the application, with costs, on Jan. 17.

About 600 leave applications are submitted each year, but only about 80 are granted, according to the Supreme Court of Canada website.

"The possibility of succeeding in getting an appeal heard is in general remote.  Each application for leave to appeal is considered carefully by the Court.  The Court never gives reasons for its decisions.  It is important to remember that the Court's role is not to correct errors that may have been made in the courts below," it states.

The City of Vancouver welcomed the Supreme Court of Canada’s decision.

“The City was pleased to learn this morning that the Caring Citizens of Vancouver Society’s application for leave to appeal to the Supreme Court of Canada has been denied, with costs payable to the City,” deputy city manager Paul Mochrie said in a statement emailed to the Courier.

The city's statement acknowledges initial opposition to the Marpole buildings, but it also notes there has been support exhibited by some neighbours who hosted welcome parties and created care packages for the new residents.

The city is still looking into the final costs of the court case. City staff are not aware of any recent complaints from neighbours of the complex, and say it's operating smoothly. The community advisory committee meets regularly to discuss any issues that arise between neighbours and building residents.

The Courier has asked for a comment from the Caring Citizens of Vancouver Society about the Supreme Court of Canada’s decision. This story will be updated if a statement is received.

To date, 502 of 606 approved units of modular housing have been built in the city of Vancouver. Most recently, an opening ceremony was held for the New Beginnings complex at 5077 and 5095 Heather St. Units in those buildings are designated for Indigenous tenants.