Proposed budget sees tax hikes across the board as police transition costs soar and Newton is set to get a new community centre
Nov 18, 2020 4:03 PM By: Graeme Wood 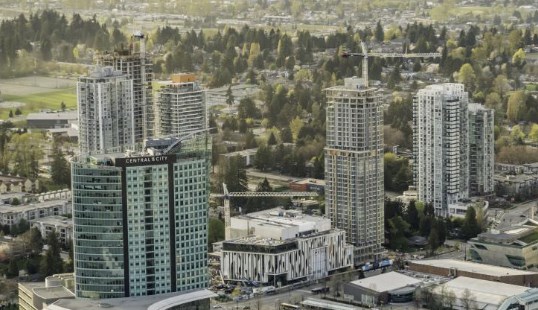 The City of Surrey is proposing an additional $200-per-household “Capital Parcel Tax” on top of a 2.9% property tax hike for 2021.

Some of the new money will go toward the city’s nascent Surrey Police Service as well as various other small capital projects. As well, the city intends to borrow $130 million on top of the tax hikes to pay for two significant projects.

Tripling the existing $100 Capital Parcel Tax will raise $31.7 million, while the property tax hike will raise an additional $11.2 million. Property tax revenue due to anticipated growth will be $1.8 million. After raising close to $45 million, the city will first have to account for a combined $10 million reduction in corporate investment income and casino revenues before dispersing the new revenue.

Balancing the scales will be a $15.1 million spend on added police operating costs. Next year will be the first that taxpayers can anticipate paying for additional costs to operate a new municipal police force. The city is planning on decreasing its contract with the Surrey RCMP by $45 million while adding $62 million to Surrey Police Service operating costs. These costs are in addition to the one-time transition costs, which come from the capital budget and are now projected to be about $64 million, or 40% higher than initially anticipated.

The city also intends to spend $600,000 more on bylaw enforcement and $730,000 for 10 firefighter positions next year, but there are no stated plans to add more police officers during the transition, which is now anticipated to be complete by late 2022.

Furthermore, the city will put $13.6 million toward an increased contribution to the capital infrastructure program.

The total 2021 major capital infrastructure program from anticipated tax revenue will be just under $29 million. The city anticipates starting the Bear Creek Park Athletics Centre, South Surrey Athletic Park track and turf replacement, a new Newton turf and washroom and a Kabaddi facility in Whalley, among many other minor projects, in 2021.

But two bigger capital projects worth $130 million will also get under way, if the budget proposal goes through on November 30 at a special city council meeting.

The larger ticket item will be $90 million set aside for the recently announced Newton Community Centre, including land acquisition. Another $40 million will go to the planned City Centre Sports Complex. This combined $130 million expenditure will be borrowed from the Municipal Finance Authority.

Meanwhile, the previously delayed $50 million Cloverdale Sport and Ice Complex will not see funding until at least 2022 through to 2024.

The 2.9% property tax increase is over four times the 0.7% increase to the Consumer Price Index (CPI). In 2018, Mayor Doug McCallum promised not to raise taxes by higher than the CPI. This could be the second straight year he’s done so, however.

“There is no question that COVID-19 has hit all of us hard economically, and Council recognizes the importance of not increasing the burden to our ratepayers,” said McCallum in a statement Monday.

McCallum also promised not to raise taxes to pay for the police transition. Over the past two years, city council has delayed infrastructure projects, outside of the police force transition, to balance the budget.

Both the proposed operating and capital budgets claim, “The fiscal hardship caused by the COVID-19 pandemic resulted in a significant financial impact to the City of Surrey.”

However, the city’s third quarter financial report shows the city is on pace for a “modest budgetary surplus at year-end of $461,000.”

This, after reporting an anticipated $40 million gross loss earlier in the year.

Coun,. Linda Annis released a statement Monday, saying the tripling of the capital parcel from $100 to $300 means homeowners with a $700,000 home will face a de facto overall tax increase of more than 15%, while a home worth $1 million will see a tax increase of almost 12%.

Annis said all city services and projects have been impacted by budget cuts to accommodate the police transition, which she opposes.

“While we closed pools, rinks and rec centres and laid off staff across the city, that wasn’t the case for the proposed SPD which just kept on spending, including using city staff without properly charging their time to the police transition which helped to hide real police costs,” Annis alleged.

“The city is also borrowing money to build new capital projects and normally that would not be an issue,” noted Annis. “However, with the city increasing taxes, it begs the question about the current state of the city’s finances.”

In addition to the higher property taxes to pay for city services and infrastructure, Surrey households will also face a 3.3% increase to water fees and 5.2% increase to sewer charges. Metro Vancouver largely controls these fees.

City council will discuss the proposed budget in council chambers on Monday, November 30, at 2 p.m. It is suggested by staff that the public provide input to the finance committee through the city clerk's office at 604-591-4132 or by emailing clerks@surrey.ca.