Sven Baertschi could be the Canucks’ biggest wild card this season

The Canucks have made a concerted effort to add top-six forwards heading into next season. Along with Tanner Pearson at last season’s trade deadline, Jim Benning acquired J.T.
Sep 5, 2019 7:40 AM By: Daniel Wagner 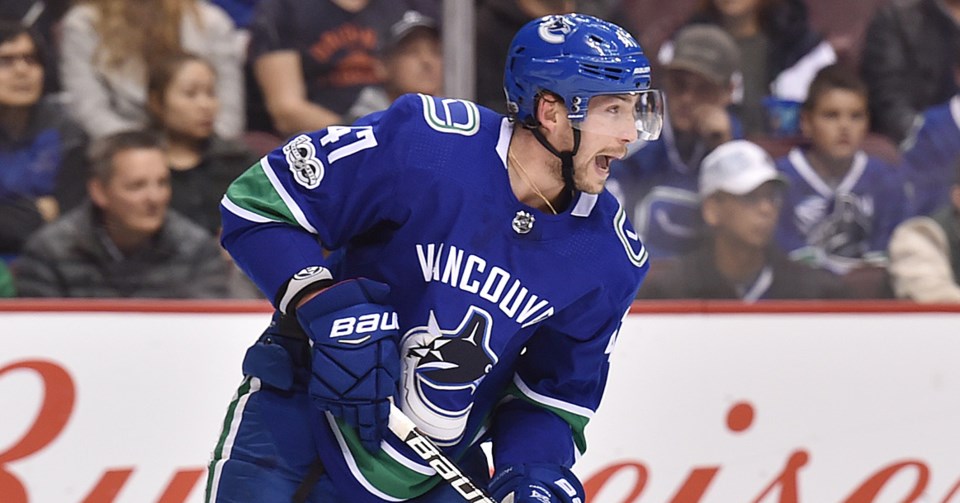 Sven Baertschi calls for the puck while playing for the Vancouver Canucks.Dan Toulgoet / Vancouver Courier

The Canucks have made a concerted effort to add top-six forwards heading into next season. Along with Tanner Pearson at last season’s trade deadline, Jim Benning acquired J.T. Miller in a trade with the Tampa Bay Lightning, and Micheal Ferland in free agency.

Along with those three wingers, the Canucks will be adding another top-six forward to the lineup: Sven Baertschi.

Baertschi, of course, was already on the Canucks roster, but he missed so much time last season that he almost feels like a new addition. That means Baertschi could be the wild card the Canucks need to get them back to the playoffs.

Over the last three seasons with the Canucks, Baertschi has been remarkably consistent with his point production, putting up a little over half a point per game in each of those seasons. That’s a pace of 42-45 points over a full 82-game season, which is high-end production for a second-line winger and bordering on first-line production.

There’s just one issue: Baertschi hasn’t played anywhere near 82 games at any point in his career.

Baertschi has had a litany of injuries in his career, including a broken jaw from a deflected puck and a separated shoulder in 2017-18 that restricted him to 53 games. His injuries that have caused the most concern are concussions, as they can threaten both careers and quality of life after retirement from the game.

In the 2016-17 season, Baertschi took a blindside hit to the head away from the puck from the Nashville Predators’ Cody McLeod. Somehow, the Department of Player Safety decided the ugly and unnecessary hit was an “accidental collision.” While Baertschi missed almost a month of the season, McLeod didn’t even get a penalty on the play, let alone a fine or suspension.

Last season, another concussion kept Baertschi sidelined for months, the result of another blindside hit to the head. Tomas Hyka of the Vegas Golden Knights hit Baertschi from behind in an October 24th game and Baertschi missed over two months after the hit, then returned for nine games before post-concussion syndrome took him off the ice for another two months.

Those were difficult days, though Baertschi credited his teammates for keeping his spirits up.

“They’re the best teammates, man,” said Baertschi after he returned to the lineup in April. “They’ve been unbelievable through this whole process, checking in on me every day and even when the boys were on the road, I got messages from them, guys just checking in every single day, and I never got tired of it. I was just so excited that the guys cared so much.”

Baertschi returned to the lineup for four games to end the season, perhaps as much to prove to himself that he could do it as anything else. In limited minutes as Travis Green eased him back into the lineup, Baertschi proved he still had the scoring touch, firing in a lovely goal against the Dallas Stars.

The final tally? 9 goals and 14 points in 26 games, a 28-goal, 44-point pace over 82 games. Sure, Baertschi would have been hard-pressed to reach those totals even if he was healthy, but there’s no denying the Canucks could have used his production throughout the season.

“I think his numbers don’t lie,” said Bo Horvat after his return. “When he’s been in the lineup, he’s been scoring and producing, so it’s unfortunate that he had that one hit. I think, for him, to go through that adversity and still come back and play as well as he has, I think that shows a lot about him.”

When Baertschi was in the lineup, he played primarily with Brock Boeser and Bo Horvat, but he might not play with either of them to start the coming season. One of Miller or Ferland will line up alongside Boeser and Elias Pettersson, while the other will likely skate with Horvat and Pearson on the second line.

That leaves Baertschi bumped to the third line, but that might not be the worst thing for him or the Canucks. On Wednesday, Jim Benning talked about rolling three scoring lines, emphasizing a top-nine forward group instead of the top-six, bottom-six split they’ve used in recent years. While Benning has said that before, the Canucks do have the personnel on the wings to make that work this season.

Baertschi could line up opposite from Jake Virtanen, Josh Leivo, or Nikolay Goldobin to provide some secondary scoring on the third line. The question is who could centre a scoring third line: Brandon Sutter, Adam Gaudette, or possibly Miller?

Then there’s the biggest question of all: can Baertschi stay healthy for an entire season? So far in his career, Baertschi has never reached 20 goals in a season and has a career high of 35 points, primarily because he hasn’t been healthy. If Baertschi can stay in the lineup, however, he has the potential for 20+ goals and 40+ points, particularly if the Canucks use him on the power play, where he’s been very effective.

In fact, the only Canucks that have scored goals at a higher rate on the power play over the past three seasons are Brock Boeser and Elias Pettersson.

It’s almost impossible to predict whether a player will avoid injuries during the season, but Baertschi’s injury history doesn’t inspire much optimism. For what it's worth, Baertschi's agent reports that Baertschi is 100% healthy heading into camp. If Baertschi can beat the odds and best his career high of 69 games, it would provide a nice boost to the Canucks’ playoff hopes.