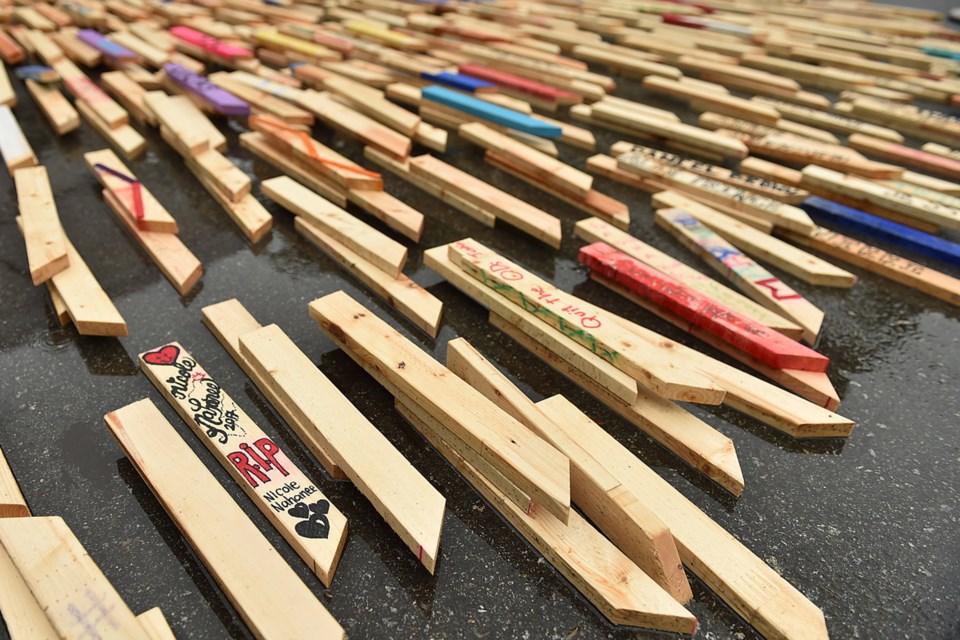 The opioid overdose crisis has resulted in the deaths of 259 people in Vancouver this year. Family and friends of some of the deceased gathered in Oppenheimer Park last week to commemorate the lives lost by placing wooden stakes in the park. Photo Dan Toulgoet

This Thanksgiving Day weekend marks a three-year anniversary that Staff Sgt. Bill Spearn of the Vancouver Police Department isn’t about to celebrate as he and his fellow officers continue to go after fentanyl dealers.

It was on Thanksgiving Day in 2014 when the Insite supervised injection site on East Hastings recorded an unusually high number of overdoses. Police rushed a sample of the drug being used in the area to a Health Canada lab and determined the presence of fentanyl.

And so began what has turned into the province’s worst drug overdose crisis in history and triggered the police department to focus its drug squads’ efforts on busting dealers and getting fentanyl — and now the more potent carfentanil — off the streets.

“We’re three years into this crisis and we still have a lot of people dying,” said Spearn of the VPD’s organized crime section. “But we’ve come a long way in those three years. We’ve got a lot more treatment options available, but it’s not proportionate to the problem.”

Spearn was at city hall Tuesday to listen to an update on the drug death crisis from Provincial Health Officer Dr. Perry Kendall, other health experts and city officials. The news is not good: The first seven months of 2017 saw 876 people die in B.C. of a suspected drug overdose, with 706 of those related to fentanyl.

In Vancouver, data from the VPD and B.C. Coroners Service shows 259 people died of a suspected drug overdose between Jan. 1 and Sept. 24. That number of deaths puts Vancouver on pace to record more than 350 by the end of the year.

Although overall drug deaths in B.C. in July dipped below 100 for the first time since October 2016, Spearn said the death toll is way above average compared to when fentanyl was detected in drug samples taken on Thanksgiving Day in 2014. An average of 31 people per month died of a drug overdose in 2014. It’s now at 125 per month.

“We expect to find it everywhere we go now,” Spearn told the Courier after the meeting.

Earlier this year, Spearn told the Vancouver Police Board the VPD completed six projects aimed at fentanyl traffickers. In one of those investigations, a 53-year-old man was sentenced to 13 years and 144 days for drug offences, largely connected to the possession and selling of fentanyl.

In the last decade, police, city politicians and health experts have requested more treatment be made available on demand for drug users. That treatment includes substitution drug therapy and other alternatives to keep people from using tainted drugs.

Kendall, who has called for a public discussion about the decriminalization of drugs, said health care experts continue to work to increase rapid access for drug users to treatment. He acknowledged more physicians need to be trained to prescribe such therapy.

Kendall noted the provincial government has committed more than $100 million to tackle the opioid crisis. That money will be used for a variety of programs and initiatives, including scaling up treatment and opening more clinics for drug users.

“So the planning that we’ve been engaged in for the last 18 months is now getting the resources behind it, and I’m delighted to see that,” Kendall said.

“It’s kind of a trickle, and it’s not as fast any of us would like it to be, but it’s definitely moving in that direction and building momentum,” said Etherington, noting the goal is to have such therapy offered at all health care clinics in Vancouver. “So that’s the model we’re working towards, as fast as we can.”

Mary Clare Zak, the city’s managing director of social policy and projects, showed council a map of the city to show the ratio of overdose calls responded to by firefighters and the number that resulted in a death.

Zak said those statistics show a need for further services in neighbourhoods outside the Downtown Eastside. That is something the city is working on with the health authority and others to reduce the overdose calls and deaths.

“What [the map] shows, for one thing, is that we need to understand that drug users live everywhere, and they need the similar kinds of supports and services, “ Zak told the Courier after the meeting. “Part of it is connecting people to care, it’s raising awareness. If you were to hear that as a drug user, you could go to an X, Y or Z place and get the help you need — and it’s all confidential and no one is going to judge you — then you might do that.”

Fire Chief Darrell Reid said the wider ratio of calls to deaths in the Downtown Eastside is an indication the department’s new three-person medic unit is having a positive effect on keeping people alive. Reid said firefighters are getting to more calls, and getting to them faster.

“It has definitely made a difference — a measurable difference,” said Reid, noting the work of health providers, community organizations and others have also contributed to the decrease in number of deaths to calls in the Downtown Eastside.