Goaltending battle between Markstrom and Demko could be key to Canucks making the playoffs.
Aug 1, 2019 8:24 AM By: Daniel Wagner 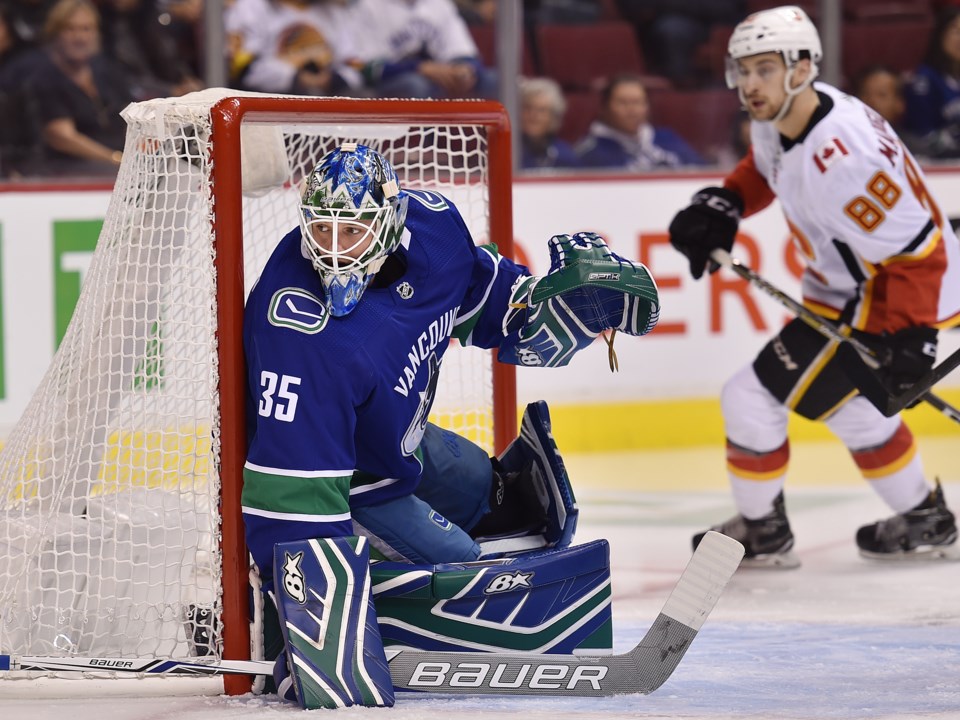 The Canucks acquisitions this off-season seem to be sending a clear message: it’s time to make the playoffs.

That’s the kind of message you send when you trade a first-round pick for J.T. Miller and sign a 29-year-old Tyler Myers for $6 million per year. It’s understandable that GM Jim Benning is pushing for the playoffs: the Canucks have missed the playoffs for four-straight seasons and need to start turning the corner from rebuilding to contending, particularly while their young superstar, Elias Pettersson, is still on his cheap, entry-level contract. Also, Benning is on the final year of his own contract and needs to make a bid for keeping his job.

New veteran additions like Miller, Myers, Jordie Benn, and Micheal Ferland will help, as will rookie defenceman Quinn Hughes and another year of experience under the belts of Pettersson and Brock Boeser. The most important component, however, will be goaltending. And the most important player will likely be rookie Thatcher Demko.

Jacob Markstrom was a workhorse for the Canucks last season, starting 60 games and maintaining a .912 save percentage, two points above the league average. For his efforts, he was named the Canucks’ Most Valuable Player in their end of the year awards over Pettersson, which makes sense: the Canucks would have been in a world of hurt without Markstrom.

That’s because Markstrom’s backup to start the season, Anders Nilsson, had a dreadful year. In his 12 starts with the Canucks, Nilsson had an ugly .895 save percentage, costing the Canucks several games along the way. He bounced back after a trade to the Ottawa Senators, but that was little help to the Canucks.

Making matters worse was a lack of depth in the goaltending position. Markstrom’s worst stretch during the 2018-19 season came in November, when both Nilsson and Demko were injured. Without a reliable backup, Markstrom started all but two games for the Canucks and struggled with the lack of rest. He had an .887 save percentage in November and the Canucks went on a long losing skid, squandering a strong start to the season. They were playing catch-up for the rest of the season.

Demko, however, has the potential to be more than just a strong backup for Markstrom, but a legitimate contender for the starting role. The 23-year-old goaltender has shown continual progression every season of his career, first developing into the goaltender in college hockey, to one of the best starts in the AHL, and now taking the next step into the NHL.

Demko finished the season strong, with a .944 save percentage in his final two games against two of the best teams in the Western Conference, the San Jose Sharks and the Stanley Cup-winning St. Louis Blues. That brought his save percentage for the season up to a strong .913, ahead of Markstrom, albeit in far fewer games.

“Stats are for you guys,” joked Demko when this was brought up. Instead of his numbers, he focussed on the experience, particularly working closely with Canucks’ goaltending coach Ian Clark.

“Especially this year, it definitely wasn’t a numbers thing,” he said. “I just needed to get in there, evaluate where my game’s at, and see where I’ve got to get better...It’s going to be even more work to make sure I come back in and I’m a better hockey player and better suited for the NHL.”

If Demko can take another step forward this off-season, the benefit to the Canucks could be huge. A better-rested Markstrom could improve on his fantastic performance last season, while Demko should provide higher-level goaltending on Markstrom’s days off, giving the Canucks a chance to win every game.

For a team where a lot will have to go right to make the playoffs, it starts with a lot going right in goal.

A tap of the stick to Chris Higgins, who officially joined the Canucks in a player development role. At the very least, Canucks’ prospects should have more highly-toned abs in the future.

I’m dropping the gloves with the Minnesota Wild, who fired their GM, Paul Fenton, after just one season. It’s not that Fenton didn’t deserve it, but firing him after letting him run the Wild’s draft and free agency is bizarre.

8.09 - According to hockey analytics website Evolving Hockey, Jacob Markstrom’s goals saved above expectations, which takes into account the quality of shots a goaltender faces, was 8.09, good for 12th in the NHL.

7 - The Canucks won just 7 of the 22 games that Markstrom didn’t start last season. Improving that number will be key for the Canucks’ hopes to make the playoffs in 2019-20.