The Canucks are mediocre, but mediocre teams make the playoffs

While the Canucks have significantly improved, they’re still an average NHL team.
Dec 12, 2019 10:00 AM By: Daniel Wagner 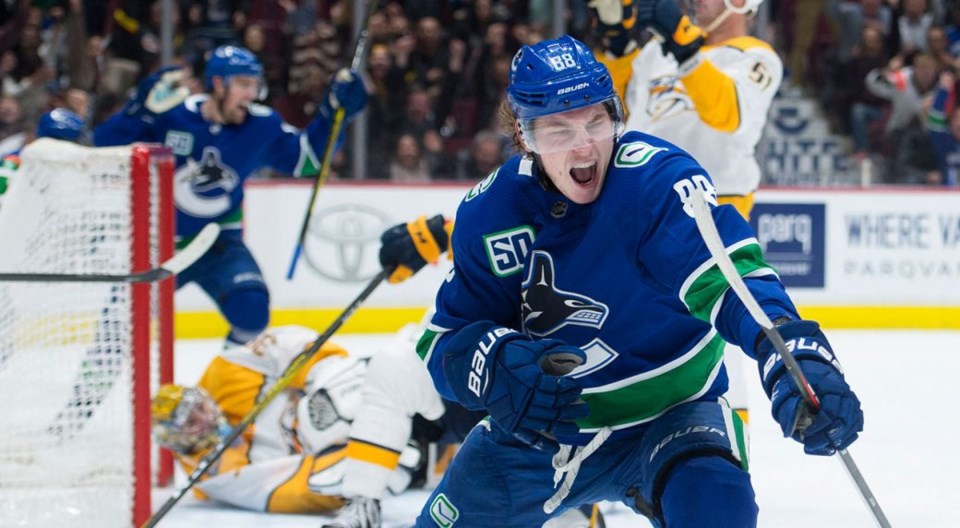 Adam Gaudette might have reason to celebrate being on an average team like the Canucks.Jonathan Hayward / CP

This looks like the best Canucks team in five years. The only problem is that doesn’t mean much.

Over the past four seasons, the Canucks were the lowest-scoring team in the NHL and had the second-worst record in the league, just one point ahead of their expansion cousins, the Buffalo Sabres.

This year, the Canucks look significantly better: they’re averaging nearly a goal more per game than over the past four seasons, have a power play that’s scoring on 26.7% of their opportunities as opposed to 17.2%, and boast one of the best lines in the NHL in J.T. Miller, Elias Pettersson, and Brock Boeser.

And yet, 30 games into the season, the Canucks sit right in the middle of the pack, about as average as can be. Heading into Tuesday's game against the Toronto Maple Leafs, they were 9th in the Western Conference in points and 16th in the NHL, just outside the playoffs, with 15 wins and 15 losses, albeit with four of those losses coming in overtime or the shootout.

That’s about as average as average gets. For a synonym, we might call them middling or mediocre. In the NHL, however, another synonym is “playoff team.”

In a 31-team league with 16 teams making the playoffs, average teams will, by definition, get into the playoffs. Last season, the average number of points earned by an NHL team was 90.7 points. The Colorado Avalanche, who earned the final Wild Card spot in the Western Conference, finished the season with 90 points.

In fact, the Avalanche actually lost more games than they won last season: their 38-30-14 record means they lost 44 games, six more than they won. It just so happens that they managed to get 14 of their games into overtime before losing, thereby earning a single point.

According to their record, the Avalanche were a thoroughly average team, but they didn’t look average in the playoffs, polishing off the Western Conference champion Calgary Flames in just five games in the first round before pushing the San Jose Sharks to seven games in the second round. A mediocre team in the NHL can compete with the best teams in the league.

In other words, the Canucks being average or mediocre isn’t a damning statement. They can still make the playoffs as an average team and potentially do some damage in the postseason.

The first step is to make the playoffs in the first place. In order to do that, they’ll need to avoid becoming a below-average team, like they were in November. Getting injured played back, like Antoine Roussel, Brandon Sutter, and Jay Beagle, will certainly help, but the most important adjustment the Canucks will have to make is how they defend the lead.

The Canucks have given up several leads this season, including some big ones. They gave up a 5-1 lead to the Washington Capitals in October, eventually losing in the shootout. They were up 6-3 on the Pittsburgh Penguins in November, but gave up five-straight third period goals to lose in regulation.

Even on Saturday against the Buffalo Sabres, the Canucks twice held a two-goal lead, only to see those leads evaporate in a hurry, forcing some overtime heroics from J.T. Miller.

The best way the Canucks can avoid becoming below-average and instead push themselves into a playoff spot is to learn how to close out games. They can’t just depend on their defensively-focused veterans like Jay Beagle and Brandon Sutter either, as collapsing into a defensive shell with the lead is a trap. The Canucks’ best young players need to show that they can defend a lead with puck possession and controlled aggressiveness, forcing the opposing team to spend more time defending in their own zone than they do creating chances for a comeback.

If the Canucks can figure that out, then they have a chance at being better than mediocre.

A tap of the stick to Canucks prospects Vasili Podkolzin, Nils Höglander, Karel Plášek, and Toni Utunen on being invited to their respective country’s world junior selection camps and/or preliminary rosters. Jett Woo is a surprising absence from Team Canada’s camp.

The NHL appears to be dropping the gloves with abusive coaches, instituting an anonymous whistleblower hotline for players and an annual training program on diversity and inclusion. We’ll see if these steps lead to any significant change in hockey culture.

21 - Canucks prospect Brogan Rafferty is having an impressive rookie season in the AHL. He’s currently tied for first among AHL defencemen with 21 points in 26 games and is tied for second among all AHL rookies in scoring.