You would expect a team with Manny Malhotra as an assistant coach would be good in the faceoff circle. The former enabler was a beast in the faceoff circle in his NHL career, with multiple seasons above a 60% success rate and finishing with a 56.
Oct 30, 2019 6:02 PM By: Daniel Wagner 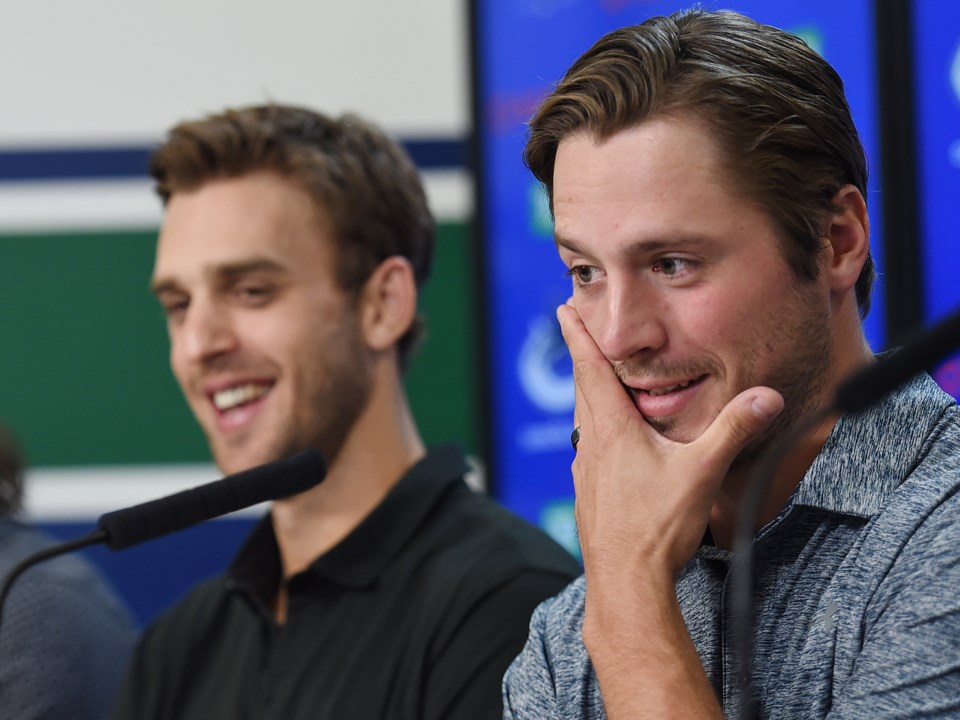 You would expect a team with Manny Malhotra as an assistant coach would be good in the faceoff circle. The former enabler was a beast in the faceoff circle in his NHL career, with multiple seasons above a 60% success rate and finishing with a 56.4% faceoff for his career, which is good for 16th-best all-time since the NHL started tracking faceoff statistics.

It’s fitting, then, that the Canucks are one of the best faceoff teams in the NHL, with a 54.9% faceoff percentage, second behind only the Philadelphia Flyers. It helps that they have Jay Beagle, one of just a few active NHLers with a career faceoff percentage better than Malhotra’s.

When you look at players that have taken at least 50 faceoffs, the Canucks have two centres among the top-10 in faceoff percentage. Jay Beagle is third behind the Flyers’ Sean Couturier and Claude Giroux, while Bo Horvat is ninth.

What’s unusual, however, is that they have a third player in the top 10, one that hasn’t played as a centre all season: J.T. Miller.

Miller started the season on right wing on the second line with Horvat before being bumped up to the first line with Elias Pettersson. The Lotto Line (named for the 6-40-9 numbers of Brock Boeser, Pettersson, and Miller) has dominated at even-strength, out-attempting their opponents 11-to-62 and out-scoring them 8-to-2 at 5-on-5.

Pettersson is the centre on that line; there’s no doubt about that. He’s the one that comes down deepest in defensive coverage and provides the primary outlet for his defencemen on the breakout. He’s the primary playmaker offensively, though the evolution of the cycle game in the NHL has erased some of the differences between centres and wingers in the offensive zone.

One thing that Pettersson doesn’t do much is take faceoffs. That’s the centre’s job, normally, with wingers only coming in to take a faceoff if the centre gets kicked out by the linesman. On the Lotto Line, however, Miller has taken the bulk of the draws.

On Monday night against the Florida Panthers, for instance, Pettersson didn’t take a single faceoff. Meanwhile, Miller took 10 faceoffs; one time when he was tossed out of the circle, Boeser came in to take the faceoff instead of Pettersson.

Miller is a versatile forward, however, capable of playing all three forward positions. He’s played centre in the past and has historically been decent on faceoffs, but not so good that you would normally have him take faceoffs in place of the natural centre on the line. This season, he’s taken a giant leap forward in effectiveness in the faceoff circle.

Miller’s career faceoff percentage is 50.1%, which is a solid number. This season with the Canucks, however, he’s at 60.8%, good for eighth in the NHL.

“There's an obvious reason Petey hasn't taken them. That's up to them on the ice,” said Canucks head coach Travis Green. “We have capable guys that can go into the face off circle and win a draw. It's been nice having Millsy with Petey and I think Petey would be the first to admit that faceoffs haven't been his strongest point. You see that with a lot of young centremen, it takes them a little bit to learn the tricks of the trade."

So far this season, Pettersson has a 44.2% faceoff percentage, just behind Brandon Sutter's 44.9% and ahead of only Adam Gaudette among Canucks centres. It’s understandable that he would concede the faceoff dot to Miller, especially when he’s been so successful this season.

It also helps that Miller is adept at a unique style of winning faceoffs that makes him unusually successful on his forehand.

Most centres have a strong side and a weak side when it comes to faceoffs. Centres generally take faceoffs on their backhand, as it allows them to quickly pull the puck back towards a teammate behind them, whereas trying to win a faceoff on the forehand involves pivoting your whole body to swipe the puck back.

On defensive zone faceoffs, centres prefer to win a faceoff towards the boards, so a right-handed centre will have their strong side on the right side of the ice and the weak side on the left.

While Miller can win faceoffs on the backhand, he’s arguably even better on the forehand. Taking faceoffs on the forehand frequently involves just swiping the puck towards a winger and hoping to win the ensuing puck battle. Miller is able to swipe the puck back towards his defencemen, however, with a quick pivot and stick movement that tends to catch opposing centres off-guard.

“It's totally different,” said Horvat about Miller’s technique. “I mean, he's so comfortable with it, right? For him, he's got a big toe curve and a big hook on his stick so it's easier for him to kind of get in there and swoop it.”

When asked if Horvat might try to learn from his technique, Horvat laughed.

“For me, I don't have that kind of scooping curve,” he said. “So I'm just gonna stick to the backhand.”

For the Canucks, being open to any forward on a line taking a faceoff, not just a centre, has helped them be one of the best faceoff teams in the league. Pettersson’s humility, in particular, is commendable. Instead of insisting on taking faceoffs himself as the centre, he’s recognized a deficiency in his own game and that one of his linemates is the better option.

The larger question, however, is how much does this matter?

The main reason, from a big picture perspective, is that faceoff winning percentage has no correlation with winning percentage. In other words, teams that win more faceoffs don’t necessarily win more games. The two statistics appear completely unrelated.

Part of the issue is that there's so much parity when it comes to faceoffs. The differences between the best faceoff teams in the world and the worst is just a couple hundred faceoffs over the course of an 82-game season, or just three or four faceoffs per game.

On the other hand, some have argued that faceoffs do matter, but only in small sections of time and primarily in the offensive and defensive zones. That makes sense; a neutral zone faceoff isn't particularly dangerous, with several steps between winning a faceoff and a shot on goal.

Gabriel Desjardins once estimated that a team would need to win 245 more faceoffs than their opposition in the defensive and offensive zone at 5-on-5 to equal one win. In other words, faceoffs matter, just not as much as other elements of the game.

Last season, the Canucks took 2494 faceoffs in the defensive and offensive zone at 5-on-5. With that many faceoffs, the Canucks would have to win 1370 faceoffs in order to win 245 more than their opponents. That’s a faceoff percentage of 54.9%, something that actually seems within the realm of possibility for the Canucks.

All that is to say, the Canucks’ focus on winning faceoffs could ultimately earn them a couple more points in the standings and have an impact on their ability to make the playoffs.