Elias Pettersson is fourth in the NHL in power play points. Quinn Hughes is tied for third among defencemen in power play points and leads all rookies, as his wizardry along the blue line has kept plays alive and set up dozens of scoring chances.
Dec 17, 2019 5:29 PM By: Daniel Wagner 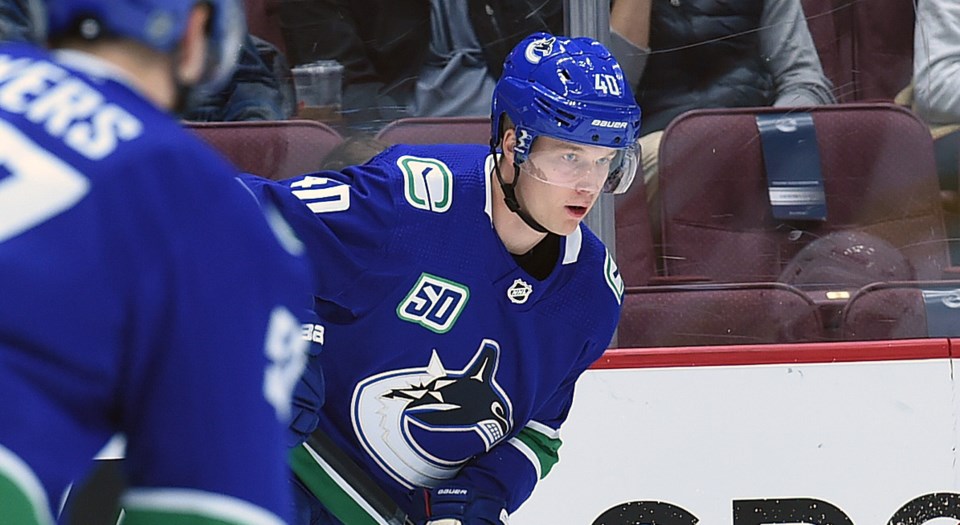 Three Canucks — Pettersson, Bo Horvat, and J.T. Miller — are tied for ninth in power play goals with six. Right behind them is Brock Boeser, with five. Those four forwards, along with Hughes, have formed one of the best power play units in the NHL.

Yes, that means the 2019-20 Canucks currently have a better power play percentage than the dominant 2010-11 Canucks, who led the NHL in that category. If they can keep racking up goals on the power play, they have a chance to set a new franchise record.

If the Canucks power play is so effective, however, that raises a question: why does it sometimes look so discombobulated?

At times, the Canucks power play looks completely ineffective, unable to breakout of the defensive zone and gain the opposing blue line, let alone get set up in formation. In one game, the Canucks will zip the puck around the zone with impunity on the power play; the next game, they’ll look indecisive with the puck and repeatedly turn it over.

What’s intriguing is when you look at how the Canucks have performed compared to the quality of the penalty kills they have faced.

The Canucks have feasted against teams in the bottom half of the league in penalty kill percentage. They’re 24-for-60 on the power play against the bottom-15 teams, a power play percentage of 40%.

Against teams in the top-half of the NHL in penalty kill percentage, the Canucks have starved, going 8-for-66 on the power play. That’s 12.1%.

It’s especially stark when you look at the very best and very worst penalty killing teams. Against the top-5 teams on the penalty kill, the Canucks are just 4-for-39, a percentage of 10.3%. Against the bottom-5 teams, they’re 11-for-22: 50%.

That’s right: when the Canucks face one of the five worst penalty kills in the league, they’ve scored on half of their power play opportunities.

To a certain extent, you would expect a power play to perform better against bad penalty kills and worse against good penalty kills, but not to this extent. The difference is stunning and unusual.

The Blues have actually been slightly better against good penalty kills, but the difference is small enough that we can essentially say they’ve performed about the same against both the best and worst penalty kills.

So, what’s going on with the Canucks power play? They clearly have the skill to pick a weak penalty kill apart; what is it about a good penalty kill that shuts them down?

The Canucks have a lot of skill on their top power play unit, but limited experience, with all but Miller under the age of 25, and their two best players, Pettersson and Hughes, under 22. Perhaps that lack of experience plays a factor when they face a penalty kill that is a well-oiled machine?

Perhaps the Canucks power play is too predictable, and a well-coached penalty kill, with good pre-scouting, can take advantage of that in ways that a weaker penalty kill cannot.

The coaching could be the other way around: perhaps the Canucks coaching staff have an easier time pre-scouting weaker penalty kills and preparing the power play to go up against them, but can’t figure out the stronger penalty kills as easily.

Or perhaps this is all just a random coincidence, a fluke in the numbers that will balance out by season’s end.

If it is a real issue that will continue throughout the season, the Canucks could be in trouble. The Canucks have been outscored this season at even-strength: they’re currently 19th in the NHL in goals for per hour and 23rd in goals against per hour.

In other words, the Canucks depend on special teams to out-score their opponents and win games. Their penalty kill, after a strong start, has settled in at league-average, so their power play is the biggest difference maker. If they can’t depend on their power play against teams with good penalty killing, they’re going to have trouble winning games.

As for the teams with weaker penalty kills, if they can avoid the penalty box against the Canucks, they’ll have an easier time. Fortunately for the Canucks, that isn’t a problem just yet: the Canucks lead the league in power play opportunities per game, with Elias Pettersson among the league leaders in drawing penalties.