As the Canucks struggle, the Pacific Division just keeps getting tougher.
Dec 19, 2019 9:12 AM By: Daniel Wagner 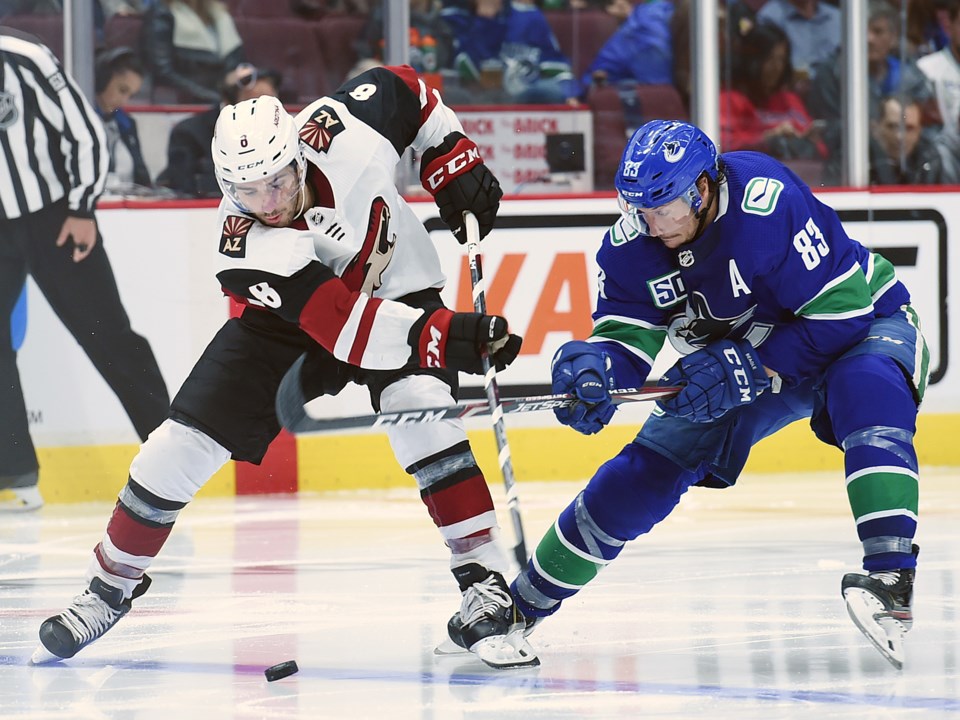 Taylor Hall desperately wants to make the playoffs, which makes him a great fit for the Arizona Coyotes, a team that hasn’t made the playoffs in the last seven seasons, but is trending in the right direction this season.

The Coyotes made a bold move acquiring Hall, particularly so early, with more than half the season remaining to be played. That gives Hall plenty of time to find chemistry with linemates and make a significant impact on the Coyotes’ play to be the top team in the Pacific Division. As an added bonus, the rental of Hall didn’t cost them a single player off their roster, just a handful of middling prospects, along with a pair of picks. Even the first-round pick in the trade is top-three protected just in case the Coyotes find themselves out of the playoffs and win the draft lottery.

That means the Pacific Division just got a whole lot tougher for the Vancouver Canucks.

Hall is just a season removed from winning the Hart Trophy as the NHL’s most valuable player and his 25 points at the time of the trade immediately made him the Coyotes highest-scoring player. The Coyotes instantly became a more dangerous team, adding high-end star power to their already-impressive depth.

For Hall, he went straight from a team that was second-last in the Eastern Conference with 25 points to a team tied for first in the Pacific Division with 42 points. For a player that has seen just five playoff games in his entire 10-year career, the trade was a welcome development.

It’s not a welcome development for the Canucks, who have yet to face the Coyotes this season, so all three of their meetings this year will be with the newly-improved Coyotes. But the Canucks have more than just the Coyotes to worry about in the Pacific.

The Calgary Flames just went on a seven-game winning streak to leap past them in the standings and are starting to look like the top-end team they were predicted to be heading into the season.

The Vegas Golden Knights likewise look like one of the best teams in the Western Conference after a mid-November lull saw them dip in the standings. They just steamrolled the Canucks on the weekend with their relentless attack.

With the Coyotes, Flames, and Golden Knights hitting their stride, the Canucks will be in tough to be one of the top-three teams in the Pacific to secure a playoff spot without relying on the Wild Card. That’s not to mention the Edmonton Oilers, who have hit on hard times in December, but are still at the top of the Pacific thanks to the blistering pace they set to start the season.

Beyond their competition in the Pacific Division, the Canucks’ biggest obstacle to making the playoffs is the Canucks.

After a stellar start to the season in October, the Canucks have gone on a serious slide, unable to string together more than two wins in a row since October 17th. The Canucks have won just four of their last 21 games in regulation. They're 7-12-2 in that time.

The Canucks are trending in the wrong direction, which becomes starkly evident when you look at their underlying statistics over the course of the season. The team’s corsi, which is a statistic measuring shot attempts for and against, was among the best in the league through October, then came crashing down in November. While they bounced back a little in early December, the Canucks are back below 50% in shot share: at 5-on-5 they’re getting consistently outplayed by their opponents.


The team’s only saving grace has been their power play, which has been a bit streaky, but is still one of the best in the league. When the power play’s not clicking, however, the Canucks aren’t winning. The Canucks have won just two games all season when the power play has failed to score, and one of those wins was by the skin of their teeth in the shootout.

The Canucks need to get their house in order in a hurry, because the rest of the Pacific Division isn’t waiting around for them.

I’m dropping the gloves with the NHL All-Star Ballot for not including rookie wunderkind Quinn Hughes as an option, instead requiring him to be written in to vote for him. Hughes is currently third among rookies in scoring.

A tap of the stick to Marc Crawford, who responded to allegations of abusive conduct from former players with a clear understanding of what he did wrong, a sincere apology, and an outline of the steps he has already taken over the last decade to improve himself as a person and coach, which included counseling. His statement should be seen as a perfect example of how others in the hockey community should respond.

13 - Canucks’ prospect Tyler Madden’s fantastic sophomore season at Northeastern University continued with another two-point night on the weekend. He’s tied for the goalscoring lead in the NCAA with 13 goals and has the outright lead in goals-per-game with 0.76.

11 - Tyler Motte set a new record for most hits in a single game by a Canucks forward during Sunday’s game against the Vegas Golden Knights. Perhaps that’s because he and his linemates never had the puck — the Canucks were out-shot 11-to-3 when Motte was on the ice — but at least he was engaging physically.