There was a strong chance Vasili Podkolzin, once in the discussion to go third overall after Jack Hughes and Kaapo Kakko, would fall to the Canucks at tenth overall.
Jun 21, 2019 6:31 PM By: Daniel Wagner 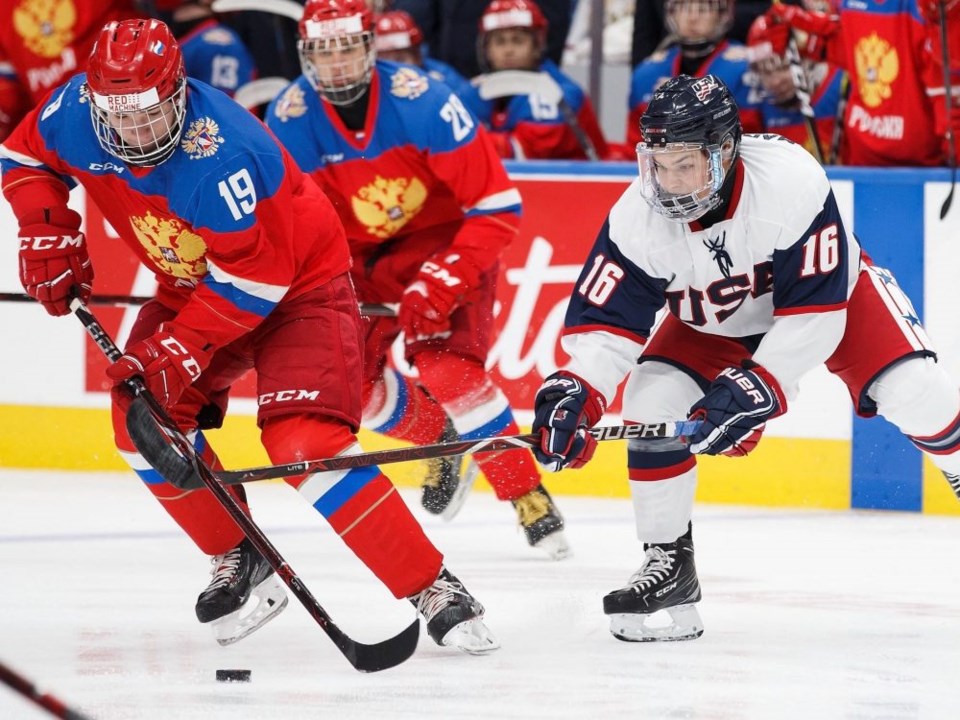 There was a strong chance Vasili Podkolzin, once in the discussion to go third overall after Jack Hughes and Kaapo Kakko, would fall to the Canucks at tenth overall. The question was, would the Canucks take him if he was available?

All eyes were locked on the stage as Jim Benning and co. took the stage at Rogers Arena. They sent Stan Smyl to the microphone to make the pick, and he said the appropriate thank yous to the fans before making the pick.

Some earlier picks shook things up, starting with the Chicago Blackhawks taking Kirby Dach third overall. That was unexpected, but he was still supposed to be a top-ten pick, so nothing really changed for the Canucks. What really changed things was the Detroit Red Wings reaching to take Moritz Seider sixth overall. The German defenceman was expected to go in the teens or twenties, so him jumping into the top ten likely changed the plans of a lot of teams picking after them.

That made the possibility of Podkolzin sliding even more likely.

It wasn’t just Podkolzin that slid, however. The Canucks also had the option of selecting goal-scoring wizard Cole Caufield, hard-working Peyton Krebs, speedy Alex Newhook, or swiss-army-knife Matthew Boldy. I have no way of knowing how difficult the decision was for them, but they seemed pretty happy to add Podkolzin to their prospect pool.

Podkolzin is a thrilling player to watch, a tenacious, hard-hitting winger that matches his two-way grit with impressive skill. If Canucks fans have been eager to see a true power forward, Podkolzin is exactly that.

“When discussing compete-levels, only a handful of players come close to matching Vasili’s,” says Hockey Prospect.

“His hockey-sense and energy give him the ability to manipulate the momentum of a shift in different facets, complementing his 200-foot-game,” they continue. “As examples, he can bulldoze through a defenseman on his way to the net, get into heated altercations, or finish a devastating check which forces opposing teams to take notice.”

He also has notable leadership qualities, with his coaches raving about his play on the ice and personality off the ice.

Let’s make it clear: it’s not all about intangibles for Podkolzin, though he has those in spades. He’s strong on his skates, has a tremendous release on his shot, fantastic hands, and underrated playmaking. NextGen Hockey’s profile on Podkolzin notes his shot assists are exceptionally high, particularly when you note that he was playing in a men’s league. He sets up a lot of chances with his vision and the threat of his shot.

Podkolzin is a driven player, who wants to make the NHL, but he’s still a couple years away. He has two years remaining on his KHL contract and has made it clear that he intends to play out those years before coming across the pond to the NHL. Once he’s here, however, he should be able to step directly into the Canucks’ lineup.

According to the Canucks' Russian scout, Sergei Chibisov, who translated for Podkolzin for all of his interviews, there's no way that Podkolzin will play fewer than two years in the KHL, thanks to the lack of a transfer agreement between the KHL and NHL.

"To play in NHL is a dream of any player," said Podkolzin, making it clear that the NHL is his goal. Once he's in the NHL, he'll quickly become a coach's favourite, thanks to his equal commitment to defence as to offence.

Podkolzin almost plays harder when he doesn't have the puck, tracking down the puck like an overexcited golden retriever, bowling over anyone in his way.

"Modern hockey game, the player has to play defense as well as offense," he said, and scouts have praised his two-way ability.

The play aboe illustrates what Podkolzin is all about, tracking back an opposing player with a strong backcheck. He knocks the puck off his man's stick, then knocks his man to the ice. The puck still isn't in his possession, so he chases down another opposing player to knock him down, then jumps up ice for the counter-attack.

To go with that hard-checking game, Podkolzin can score goals like this:

Here's a goal by Podkolzin. Goes end-to-end and then scores from his knees. Incredibly skilled, very tenacious. He'll look great on a line with Pettersson or Horvat. pic.twitter.com/k5xwHtIR0b

Podkolzin is a player worth getting excited about and fans should be thrilled that he fell to the Canucks at tenth overall.